Top 8 Things To Do In Baku 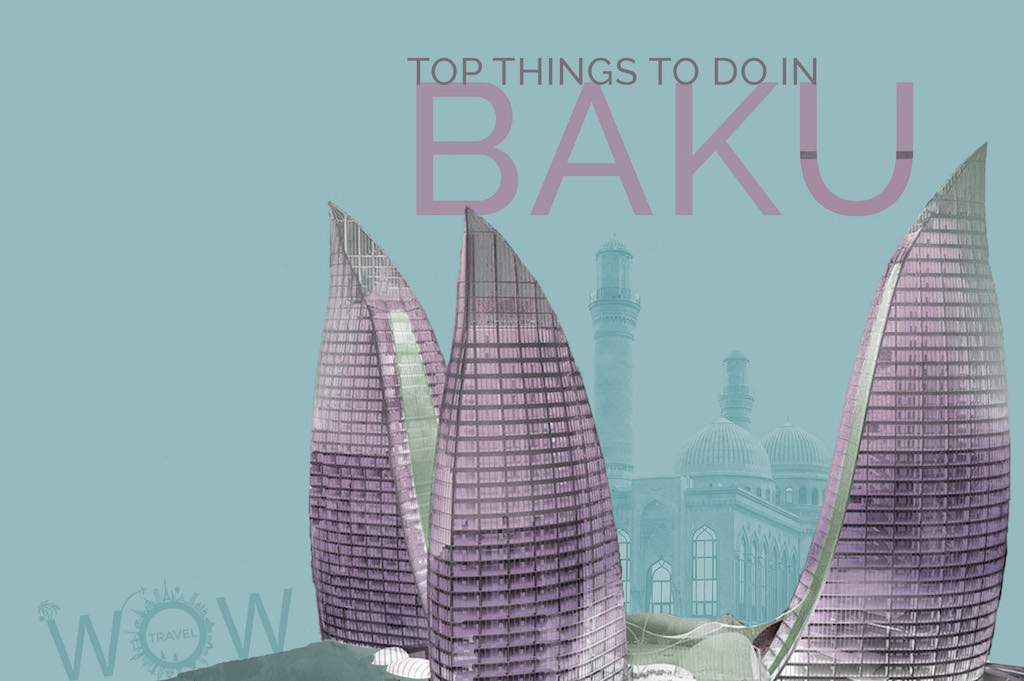 On the shores of the Caspian sea lies a small yet vibrant city called Baku. The perfect amalgamation of a nascent nation with the antiquity that dates back for millennia. This city has witnessed a history of an exodus of people that include the Turkic tribe, Shiite Muslims with Persian origins, and the Russians all of whom helped to forge the exotic and fascinating city it has become. Azerbaijan is also referred to as “the land of fire” which may be due to the large deposits of oil in the land but also due to the energy and intelligence of its people which made of Baku a very important commercial center on the Silk Route, the trading passageway from Europe to China. Nowadays, Baku is a jewel and example of good life in the region, considered number 8 in the world due to its amazing nightlife. Baku offers its visitors marvelous architecture, great hotels, incredible restaurants, entertainment of all kinds, ancient history, nature and more. WOW Travel shares with you the Top 10 Things To Do In Baku.

Palace of the Shirvanshahs

“A UNESCO World Heritage Site, the palace is one of the oldest symbols of Baku and the biggest monument of the Shirvan-Absheron branch of the Azerbaijan architecture, situated in the Old Town. It was built in the 15th century.

The Azerbaijan Carpet Museum is a unique institution that keeps one of the richest collections of Azerbaijan carpets in the world. Besides old carpets and works of applied art, the museum also exhibits works by modern weavers and craftsmen.

Located in the Baku Bay, the Bibi-Heybat Mosque is a historical mosque in Baku. It is one of the most significant monuments of Islamic architecture, heritage architecture, enriching the culture and history of Azerbaijan. The existing structure, built in the 1990s, is a recreation of the mosque with the same name built in the 13th century by Shirvanshah Farrukhzad II Ibn Ahsitan II, which was completely destroyed by the Bolsheviks in 1936.

In the heart of Baku’s vibrant center, Flame Towers are the tallest skyscrapers in Baku with a height of 190 meters (623 ft). Stand at Baku’s downtown seafront or in the Old City, and you’ll see them rising in the distance, three tapering towers reaching up, combining to form the shape of a vast fire. Fairmont Baku Hotel lies within one of the three Flame Towers – an extraordinary, award-winning hotel.

As part of the former Soviet Union, the urbanism, and architecture of Baku was heavily influenced by the planning of that era. Since its independence in 1991, Azerbaijan has invested heavily in modernizing and developing Baku’s infrastructure and architecture, departing from its legacy of normative Soviet Modernism. The Heydar Aliyev Center is a 619,000-square-foot building complex designed by Iraqi-British architect Zaha Hadid and noted for its distinctive architecture and flowing, curved style that eschews sharp angles.

The Temple of Fire “Ateshgah” on the List of World Heritage Sites, UNESCO. It’s been a museum since 1975. The fires use to come out of the top of the 4 corners. This fascinating Fire Temple was a place of sacrifice founded above a natural gas vent. Marco Polo described the oil fields of the Absheron peninsula around 800 years ago: “Near the Georgian border, there is a spring from which gushes a stream of oil, in such abundance that a hundred ships may load there at once. This oil is not good to eat; but it is good for burning and as a salve for men and camels affected with itch or scab. Men come from a long distance to fetch this oil, and in all the neighborhood no other oil is burnt but this.”

Gobustan National Park also officially titled the Gobustan Rock Art Landscape is a UNESCO World Heritage Site. The park is an easy day trip from Baku being about 64 km (40 miles) southwest of the city. This natural wonder is made up of boulder and stone formations forming many caves and canopies that were once occupied by prehistoric man.

The most majestic and mysterious monument of Baku is Maiden Tower, also known locally as Giz Galasi, rising in the south-eastern part of the fortress of Ichari Shahar and was built in the 12th century as part of the walled city. This unique building of the Azerbaijani architecture does not have any analogues in the East. The origins of the tower are shrouded in mystery, no one knows for certain when it was built or what it was built for. No written sources survive that record its construction or original function. As soon as you get to the top of it, you will be amazed with the spacious view of Baku and its all beauty.