The 7 Most Stunning Salt Flats In The World 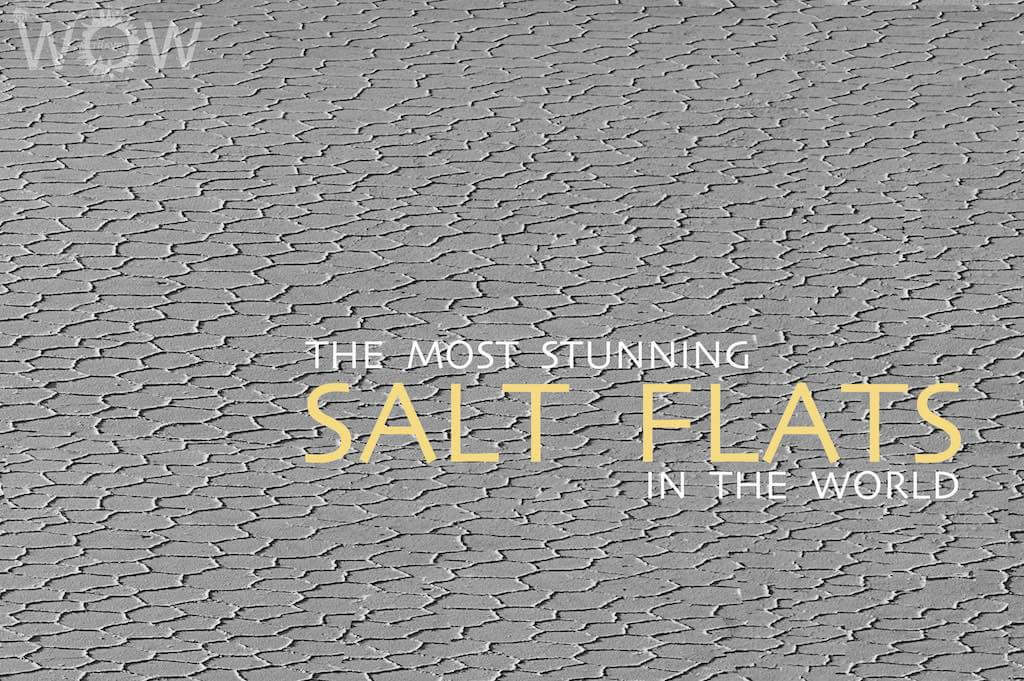 Salt flats are dried-up desert lakes, they have some of the unique natural features on earth, a vast expanse of impressive white sheets, glinting facades and picturesque landscapes.

But how do salt flats form? They form in closed hollows where rainfall can’t drain away. In a wet climate, a lake would form but, in a desert, the water is heated and evaporates into vapour faster than it is replenished by rain. The salt and minerals dissolved in the water are left behind as a solid layer. Delicate crystals are easily crushed and the relatively thin upper crust of salt can break through to the mud layer below, leaving tire tracks and even footprints. Source: howitworksdaily

Check out The 7 Most Stunning Salt Flats In The World

At an altitude of approximately 3,350 meters (10,990 ft), Salinas Grandes is an enormous salt flat in northwestern Argentina and the 3rd largest plateau in the world. The Salinas Grandes are nearly 60 km (37 miles) from end to end and they are an increasingly important source of income for the region, namely for salt and potassium mining.

The Badwater Basin salt flats located in the heart of California’s Death Valley National Park is is the lowest point in North America, with an elevation of 86 meters (282 ft) below sea level. The salt flats cover nearly 518 sq km (200 sq miles), among the largest protected salt flats in the world. The low, salty pool at Badwater is probably the best known and most visited place in Death Valley.

Located about 185 km (115 miles) west of Salt Lake City, the Bonneville Salt Flats formed 17,000 years ago as a vast saline lake. As the water evaporated over millennia, a thick layer of salt remained on the lakebed. Today the crust is replenished naturally by winter rains, which carry minerals, including rock salt, from the watershed. Utah’s Bonneville Salt Flats are an iconic setting for car commercials and feature films. Land speed records have been made and broken on its lunarlike surface for more than a century. Now Utah’s famous Bonneville Salt Flats are disappearing.

Chott el Djerid is a large endorheic salt lake in southern Tunisia, close to the Algerian border. Chott el Jerid was some thousand years ago part of the Mediterranean Sea and nowadays it is the largest salt pan of the Sahara Desert. ‘Chott’ is the word used in Tunisia for lakes that stays dry through the hot season, but which has some water in the winter. At times parts of the lake appear in various shades of white, green and purple. In summer Chott el Jerid is entirely dried up and numerous fata morganas occur.

In the arid, high plateau of Argentina’s Salta province, just east of the Atacama Desert and the eastern cordillera of the Andes Mountains, dry lake beds indicate a time when the landscape was bathed in water. Today it is dry rock crusted in salt—the remnants of evaporation, baking sunlight, and fierce winds. This is the Salar de Arizaro. Spanning more than 1,600 square km (600 square miles), Salar de Arizaro is the sixth largest salt flat in the world. The region is rich in salt formed between five to ten million years ago when a salty inland sea may have covered the land. Iron, marble, onyx, potassium, boron, and copper are also relatively abundant. Source: NASA

The Etosha Pan is a vast, bare, open expanse of shimmering green and white at 130 km’s (81 miles) long and up to 50 km’s (31 miles) wide, it is the largest salt pan in Africa, visible even from space. The pan was originally a lake but over time, the earth’s climate forced the rivers that once fed the lake to change course and flow into the Atlantic Ocean. Source: etoshanationalpark

Salar De Uyuni, the biggest salt flat in the world, is located in southwest Bolivia near the crest of the Andes, at 3.650 meters (11,975 ft) above sea level and stretches for 10,582 sq km (4,086 sq miles). Some 40.000 years ago, the area was part of Lake Minchin, a giant prehistoric lake. When the lake dried, it left behind two modern lakes, Poopó and Uru Uru, and two major salt deserts, Salar de Coipasa, and the larger Salar de Uyuni. Salar de Uyuni is roughly 25 times the size of Bonneville Salt Flats in the United States and is estimated to contain 10 billion tons of salt of which less than 25.000 tons is extracted annually. During the flooding season, it transforms into something really incredible: the world’s largest mirror. Source: rutaverdebolivia