Top 10 Highest Mountains In The World 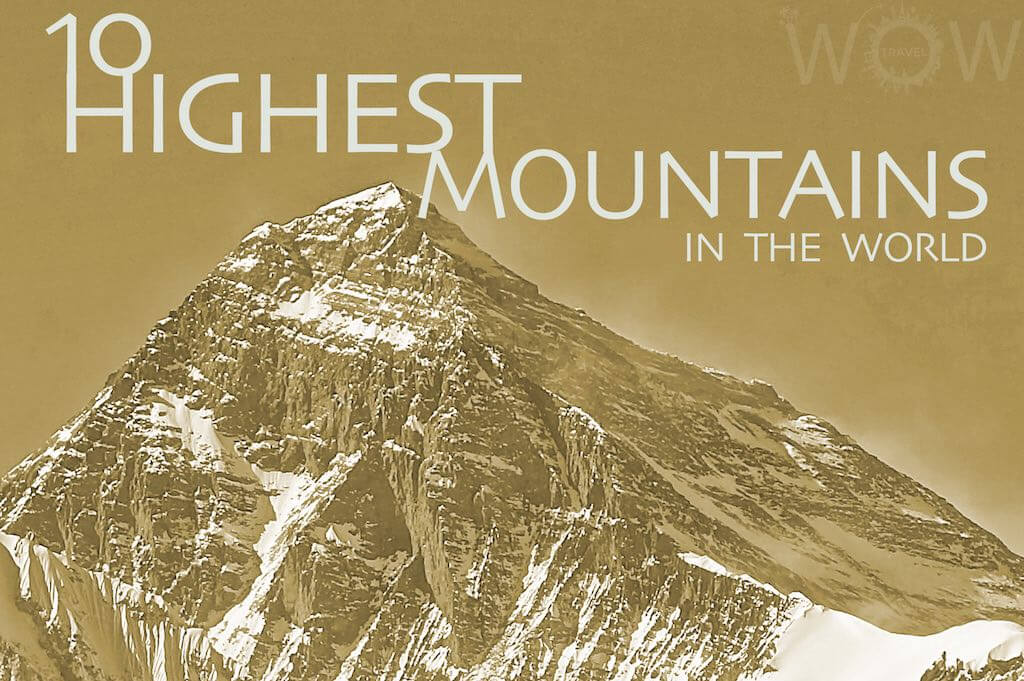 Measuring each mountain’s summit, or tallest point, by their height above sea level, the highest ten mountains on earth, including famous mountains such as Mount Everest and K2, are all located in Asia. Each of these mountains belongs to the “eight-thousanders” club, a list that consists of the 14 mountains on Earth that are 8,000 meters (about 26,250 ft) tall or more. Here is a list of the Top 10 Highest Mountains In The World.

Nanga Parbat is located in the Northern Areas of Pakistan and is the Western bastion of the Himalaya. The south face is the largest in the world extending over four kilometres above base camp. To date there have only been five ascents from the south. Nanga Parbat means “Naked Mountain” in Hindi/Urdu and is with reference to the south face’s exposed rock buttresses. First ascent by Austrian Hermann Buhl. Nanga Parbat is not a single peak but 20 km (12.4 mile) long series of peaks and ridges culminating in an enormous ice crest of 8,126 m (26,660 ft). It’s the western anchor of the Himalayas and westernmost of all eight thousanders.

Located forty miles east of Annapurna, Manaslu (also called Kutang), the eighth highest mountain in the world, dominates the Gurkha massif. The name Manaslu is derived from the Sanskrit word Manasa meaning “Mountain of the Spirit”. The Manaslu Trek is a 14-day trek, on the way to the top you will meet both Hindu and Buddhist culture, protected wildlife, rhododendrons and wild flowers, raging rivers, precarious bridges and stunning mountain scenery. The mountain’s long ridges and valley glaciers offer feasible approaches from all directions, and culminate in a peak that towers steeply above its surrounding landscape.

The mountains name comes from Sanskrit and is interpreted in two ways: Either White Mountain (standard) or Beautiful/Dazzling Mountain. It lives up to those names as it has a reputation for bad weather usually containing loads of snow. If you plan on climbing Dhaulagiri I, expect the expedition to last around 40 days. Out of all climbers who have attempted to reach the summit, 18% have died – making Dhaulagiri I the fourth deadliest mountain ascent in the world.

Cho Oyu is the sixth highest mountain in the world, located on the border of Tibet (China) and Nepal about 20 km (12.4 mile) to the west of Mount Everest. Just west of Cho Oyo, at about the location of Advanced Base Camp, is the Nangpa La, a 5500 meter glacier pass which is a major trade route between the Khumbu Sherpas and Tibet.

Makalu, the world’s fifth highest peak in the world is situated just 22 km (14 miles) east of Everest in the Khumbu region, It is a beautiful and impressive massive mountain, and its perfect pyramid structure with four sharp ridges makes this mountain all the more spectacular.

Lhotse is the fourth highest mountain in the world. It is situated at the border of Tibet and Nepal. Its long east-west crest is located immediately south of Mount Everest, and the summits of the two mountains are connected by the South Col, a vertical ridge that never drops below 8,000m (26,246 ft).

Kangchenjunga is third highest mountain in the world, and the most easterly of the 8000 meter peaks of the Himalaya. It is located on the border between Nepal and Sikkim (India) and its name means Five Treasures of the Great Snow, a reference to its five summits. The treasures represent the five repositories of God, which are gold, silver, gems, grain, and holy books.

K2 stands near Afghanistan, on the border between Pakistan and China, in an area most closely related by history to Kashmir. To say the least, it is a very colorful corner of the world in which to embark on an adventure. The name K2 was given in 1852 by British surveyor T.G. Montgomerie with “K” designating the Karakoram Range and “2” since it was the 2nd peak listed. There are many glaciers on the south and east of K2 and the melt waters feeds the agriculture in the valleys and also contribute significantly to the regional fresh water supply.

Mount Everest or Qomolangma (meaning “Goddess Mother of Snows” in Tibetan) is the Earth’s highest mountain. It is located on the border between Sagarmatha Zone, Nepal, and Tibet, China and is part of the Himalayan Mountain Range. Although it is the tallest mountain and attracts many climbers of both advanced and limited climbing skill, it is one of the easier mountains to climb. The mountain was officially recognized as the highest mountain in 1856 by Andrew Waugh. The name Mount Everest was also given by Waugh. He named it after the welsh surveyor George Everest who was his predecessor as the surveyor general of India.

Source of some info: summitpost.org