Top 10 Things To Do In Dijon 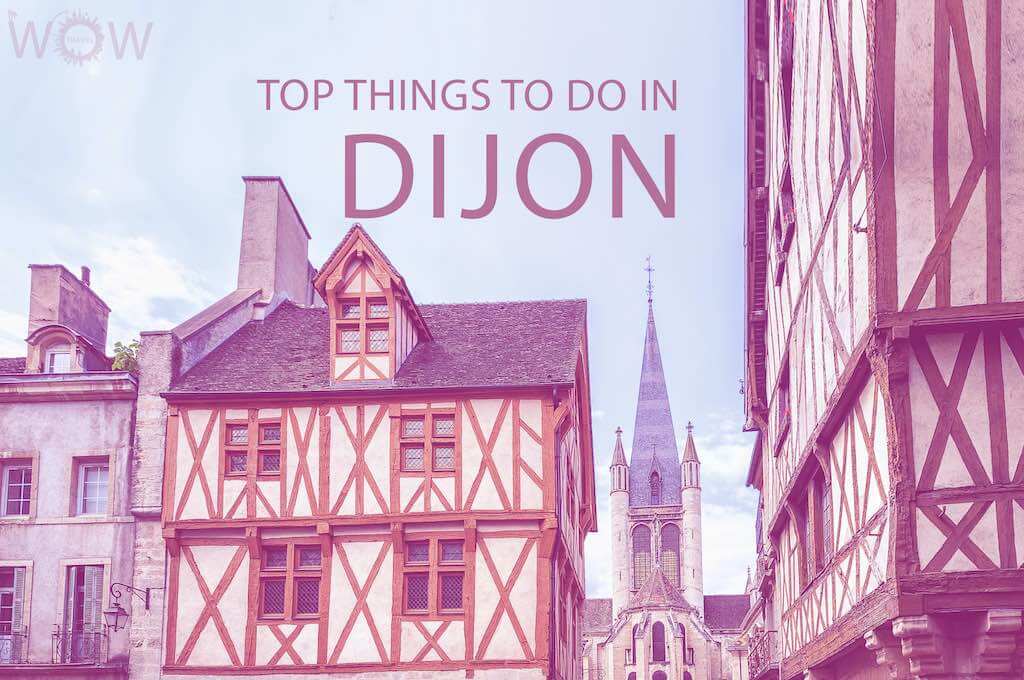 The name Dijon is synonymous with the finest mustard sauces in the world. Dijon, a quaint city in France, 190 km northwest of Geneva, is not only renowned for its traditional mustard but also for elegant medieval and Renaissance architecture. Once the capital of the Duchy of Burgundy, the rich history of Dijon is reflected in its historic center which is a UNESCO World Heritage site. Dijon was also once a Roman settlement named Divio which was situated on the road from Lyon to Paris. Although the city was occupied during the wars, it was spared from destruction. As such, many half-timbered houses dating back to the 12th and 15th centuries, still stand. There’s much to do in Dijon, from strolling down its cobblestone streets, admiring the architecture and savoring a French meal at a traditional restaurant. Our list of the top 10 things to do in Dijon in France will give you an insight into what awaits you when you get there.

1
Built between 1280 and 1314, the Cathedral Saint Bénigne is an outstanding example of Burgundian Gothic architecture. The cathedral was built over an ancient Benedictine abbey but all that remains is the three-story subterranean crypt. The remarkable ‘Rotonde’ which resembles the classical architecture of the Church of the Holy Sepulcher in Jerusalem, contains the tomb of the martyred saint. Still actively used for daily mass, the cathedral also houses and Archaeological Museum.

Palace of the Dukes and Estates of Burgundy

2
This grand architectural assemblage is a must-see attraction in Dijon. The Gothic ducal palace which is the oldest part of this complex once housed the powerful dukes of Burgundy. Whilst the palace was built in the 14th and 15th centuries, the rest of what is visible today was built in the 17th and 18th centuries. One of Dijon’s outstanding museums, the Musee des Beaux-Arts is also housed in the eastern wing of the palace. Beside the entrance of the museum is the Tour de Bar, a 14th-century tower that was once a prison. You can join a Philip le Bon tower tour to avail of sensational views of the surroundings from the top of the tower.

3
On the outskirts of Dijon is the Chartreuse de Champmol, a former Carthusian monastery founded in 1383.  Duke Philip the Bold established the monastery so that a dynastic burial place could be provided for the Valois Dukes of Burgundy. The monastery was dissolved during the French Revolution in 1791. In its heydey, it was an epitome of grandness, lavishly enriched with works of art. Today you can still admire some of the remnants such as sculptures by Claus Sluter.  The Well of Moses (Puits de Moise) and six-life size figures of the Old Testament are some of the stand-out attractions here. If you’d like to go beyond Dijon’s outskirts, take a half-day tour of the countryside and nearby villages. It’s packed with beautiful locations, from the village of Flavigny-sur-Ozerain where the movie Chocolat was filmed to the medieval town of Semur-en-Auxois.

4
Located close to the apse of the Notre Dame church is this interesting 17th-century mansion, the Hôtel de Vogüé, one of the 11 Best Hotels in Dijon.  A grand entrance porch, ornate courtyard, and glazed burgundy tiled roofs are some of the standout features of this mansion. Besides this, the exterior is beautifully decorated with ornate carvings. The mansion was built for a magistrate, Etienne Bouhier de Chevigny who was also an adviser to the Bourgogne Parliament.

5
The Church dedicated to Saint Michel is located in the historic center near the Ducal Palace in Dijon in France.  Its twin-towered facade dominates the skyline in the area. Founded in 1497, the church which took over two centuries to complete is a harmonious fusion of Renaissance and medieval architectural elements. Ornate carvings adorn the three exquisitely sculpted doorways and a gorgeous high-vaulted Gothic nave astounds all who visit. And if you join a guided tour of Dijon’s historic city center, you’ll get to know more about this church and other magnificent buildings in the area.

6
Housed in a splendid 17th-century cloister in the historic center,  the Museum of Burgundian Life is one of the best places to get a deeper insight into Burgundian culture. Several aspects of life in Burgundy have been recreated in this rather unique museum, such as an entire street on the first floor. The street has a pharmacy and numerous shops that will take you back in time. Evocative tableaux showcase the customs, crafts, and dresses of days long gone.  The best part about the museum is that there is no entry fee.

7
If you’re a nature lover looking for a great place to unwind in Dijon in France, the botanical garden is where you should head. This vast garden has vibrant flowerbeds, sprawling lawns, and avenues of shady trees along which you can enjoy a leisurely stroll. A natural history museum with a planetarium is also located within the environs of the park. If you fancy staying close to the botanical garden, you can’t go wrong with the Kyriad Prestige Dijon Centre. Less than a kilometer away, this 4-star luxury hotel in Dijon will keep you pampered during your stay.

8
Take a step back inside this traditional market referred to as a hall. This covered market, which was built between 1873 to 1875, is an example of the growing popularity of metal architecture at the time. The large arches are decorated with animal motifs, which were symbolic of most of the covered markets of that era. Inspiration for the roof came from the Halles de Paris. The central market is a great place to feel the local vibe and also enjoy some local cuisine in Dijon in France. Numerous restaurants and terraced cafes are located in its vicinity.

9
A masterpiece of Gothic architecture built in the 13th century, the Notre Dame of Dijon is quite a sight. The striking western facade has 51 gargoyles lining the three tiers of the facade. These leering forms represent humans, animals, and monsters. They were created in the late 19th century when the church underwent a massive restoration. However, gargoyles were a part of the original church but had been removed after a fatal accident in 1240. Following the accident, all the dummy gargoyles were removed except for one that survived until the 1960s. Another striking feature of the church is the 14th-century Horloge a Jacquemart, the clock tower which was transported from Belgium as the spoils of war. Visitors to the church head for the stone relief sculpture of an owl which is said to be a good luck charm.

10
The historic townhouse which belonged to art collectors Jeanne and Maurice Magnin was gifted to the state by the owners in 1938, along with the hotel Lantin. The reason being, the owners wanted to share their beautiful art collection with the world. Amassed over a 55-year period, the fantastic collection includes examples of paintings from different eras such as the Italian Renaissance and medieval period. In keeping with the wishes of the donor, the museum has retained its original features of being a private dwelling and an amateur’s cabinet.