Top 10 Things To Do In Graz 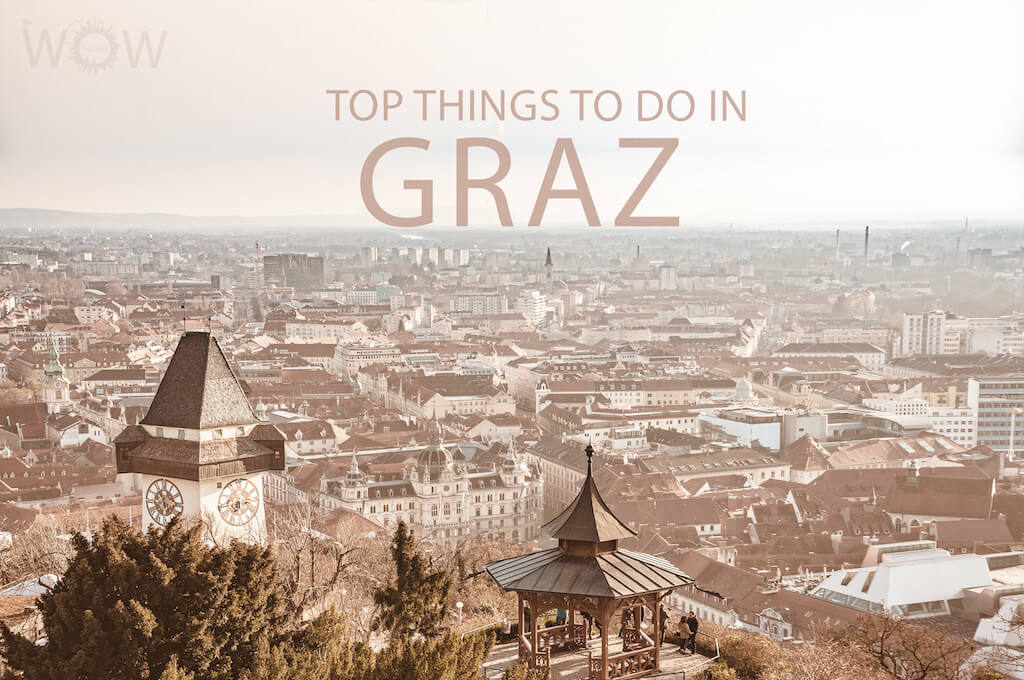 Roughly 200 km (124 miles) southwest of Vienna, Graz sits by the River Mur, between the Grazerfeld basin and the Styrian Alps. Austria‘s second-largest city is a fascinating combination of the old and the new. On one hand, it’s home to medieval dwellings and ancient buildings. On the other hand, it’s a UNESCO-designated City of Design that boasts avant-garde architecture and modern shops and restaurants. Moreover, as a university town, Graz exudes a youthful, energetic vibe. Visitors will find plenty of things to do in Graz, from exploring the fortified Old Town to browsing through its many museums. And whether you’re on a romantic getaway or a family vacation, don’t worry about finding the perfect home away from home. There are plenty of excellent hotels to choose from to fit almost any budget.

Called Castle Hill or Castle Mountain in English, Schlossberg dominates the city skyline. The Uhrturm (clock tower) dates from the 13th century but the castle that once stood here goes as far back to at least the 10th century. Today, Schlossberg is a public park filled with flowers and greenery. Taking pictures of the clock tower and the Glockenturm (bell tower) are popular things to do in Graz. If you don’t feel like hiking to the hill’s peak, you can take the Schlossbergerbahn funicular or elevator. And if you’re in the mood for an adrenaline rush, try out The Slide. This thrilling underground slide stretches 170 meters (558 feet) from Schlossberg hill down to the Schlossbergstollen caves.

This modern architectural marvel is an artificial island floating in the middle of the River Mur. Eyecatching by day, it’s amazing to see at night too when it’s illuminated by colorful navigation lights. New York City architect Vito Acconci designed this futuristic steel landmark, which resembles a seashell, to commemorate Graz’s designation as the 2003 European Capital of Culture. You can reach Murinsel via the pedestrian bridges on either side that connect it to the riverbanks. And if you book a room at the nearby Grand Hôtel Wiesler, a luxurious 4-star Graz hotel, you’ll be within walking distance of Murinsel’s attractions. These include an amphitheater that stages various types of events and a café beneath a glass dome. Also, if you’re wondering what to do in Graz with kids, Murinsel has a 3-D rope maze and a slide that will keep your young ones entertained.

A visit to this Gothic and Baroque palace complex is a must on any list of things to do in Graz. Prince Hans Ulrich von Eggenberg commissioned the palace in the 17th century, though some of the building’s parts date from the Late Middle Ages. Court architect Giovanni Pietro de Pomis designed the palace as a symbol of the cosmos according to the Prince’s wishes. In fact, the number of windows, rooms, doors, and towers alludes to time and the seasons. And if you’d like to gain a deeper insight into the palace’s place in Austria’s history, we recommend the Schloss Eggenberg Entrance Ticket and Guided Tour. During the tour, you can view the artwork in the State Rooms, marvel at the Planet Hall, explore the gardens, and more.

For devotees of the Virgin Mary and for religious architecture enthusiasts, a visit to the Mariatrost Basilica is among the top things to do in Graz. Perched atop Purberg Hill in northeastern Graz, this colorful Baroque church was constructed in 1714. It’s a well-known pilgrimage destination in Styria. According to legend, a local nobleman’s severely ill daughter was cured after praying to the Madonna. Today, Marian devotees from near and far climb 200+ steps to reach the church, which features a 15th-century statue of the Madonna in the main altar. Frescos glorifying the Virgin Mary, created by Johann Baptist Scheidt and Lukas von Schram, adorn the church interior. Also noteworthy is the pulpit, a 1779 creation by the sculptor Veit Königer.

Since the early Middle Ages, the Hauptplatz (Main Square) has served as the focal point of Graz. It originally functioned as a market, and today’s food stalls and market stalls are reminders of that. Located in the historic city center, the Hauptplatz is one of the highlights of the Graz Walking Tour With a Licensed Guide. At the square’s center is the 19th-century Erzherzog Johann fountain, which features a statue of Archduke John of Austria. Meanwhile, around the square are historic buildings such as the Rathaus (City Hall), the 15th-century Luegg Haus, and a 16th-century building where you’ll find the city’s oldest pharmacy. Festivals and other events take place in the Hauptplatz in summer. And if you visit in winter, you’ll find that merrymaking and shopping at the Christmas Market here are among the top things to do in Graz.

Stadtpark Graz, or Graz City Park, traces its roots to the late 1860s. The initial design was based in large part on painter Ernst Matthèy-Guenet’s plans, which included rare and exotic trees. The park’s centerpiece is the Stadtparkbrunnen fountain sculpted in the 19th century by Jean-Baptiste-Jules Klagmann. There are also quite a few other beautiful statues in the park. The entire Stadtpark is a cultural heritage monument that locals and visitors alike enjoy throughout the year. Sitting on one of the hundreds of benches under the trees, feeding squirrels, and bringing the kids to the park’s playground are just some of your options here if you’re thinking about what to do in Graz.

Set at the Stadtpark’s southern tip, this grand structure is among the city’s architectural gems. Designed in the Neo-Baroque style by architects Herman Helmer and Ferdinand Fellner, it’s Austria’s second-largest opera house after the Vienna State Opera. Graz Opera opened with a production of Friedrich Schiller’s drama “Wilhelm Tell” in 1899. Today, in addition to operas, it also hosts concerts by the Graz Philharmonic Orchestra and other groups. Ascending the grand staircase, admiring the Baroque and Rococo interior decoration, and watching a world-class performance here are great cultural things to do in Graz.

Sightseeing and shopping are pleasurable things to do in Graz, and you can combine these two activities at Herrengasse. Mere steps away from the Hauptplatz, this bustling street is a popular shopping destination thanks to chic shops showcasing high fashion, fine jewelry, elegant home decor, and more. But Herrengasse offers more than just shopping. Called the Bürgerstrasse in the Middle Ages, it’s also home to quite a few architectural gems. Two examples are the Renaissance-era Landhaus and the Stadtpfarrkirche (Parish Church); the latter reflects Gothic, Baroque, and modern architectural styles. Close by are several outstanding Austria hotels in Graz. We recommend the BoutiqueHotel Dom, an elegant 4-star Graz hotel offering rooms with antique and contemporary furnishings.

The Graz Stadtkrone (Crown of the Town) is composed of some of the city’s most important buildings, and this includes the Mausoleum. It is here, in this stately building beside the Graz Cathedral, that Emperor Ferdinand II, along with family members including his wife, son, and mother, are interred. The idea for the mausoleum came from Ferdinand himself; he commissioned court artist Giovanni Pietro de Pomis to construct the building and the adjoining St. Catherine’s Church in 1614. Today, visiting this historic landmark to admire the Mannerist-Baroque architecture and 17th-century frescoes in the tomb chapel is among the most popular things to do in Graz.

Wondering about what to do in Graz that’s stress-free and relaxing? Then head out to the calm oasis of natural beauty and charm that is Thalersee (Lake Thal). Located roughly 10 km (6.2 miles) west of Graz’s city center, the lake presents a peaceful vista with its clear waters, verdant foliage, and pretty waterfowl. Visit in the summer months and spend a relaxing time in a boat rental or practice your swing at the nearby golf course. And if you come in winter, you can enjoy terrific ice skating, as well as cross-country skiing that’s close by. Thinking of romantic things to do in Graz? Perhaps you might find inspiration from Arnold Schwarzenegger, who proposed to Maria Shriver during an intimate boat ride here.