Top 12 of The Coldest Countries In The World 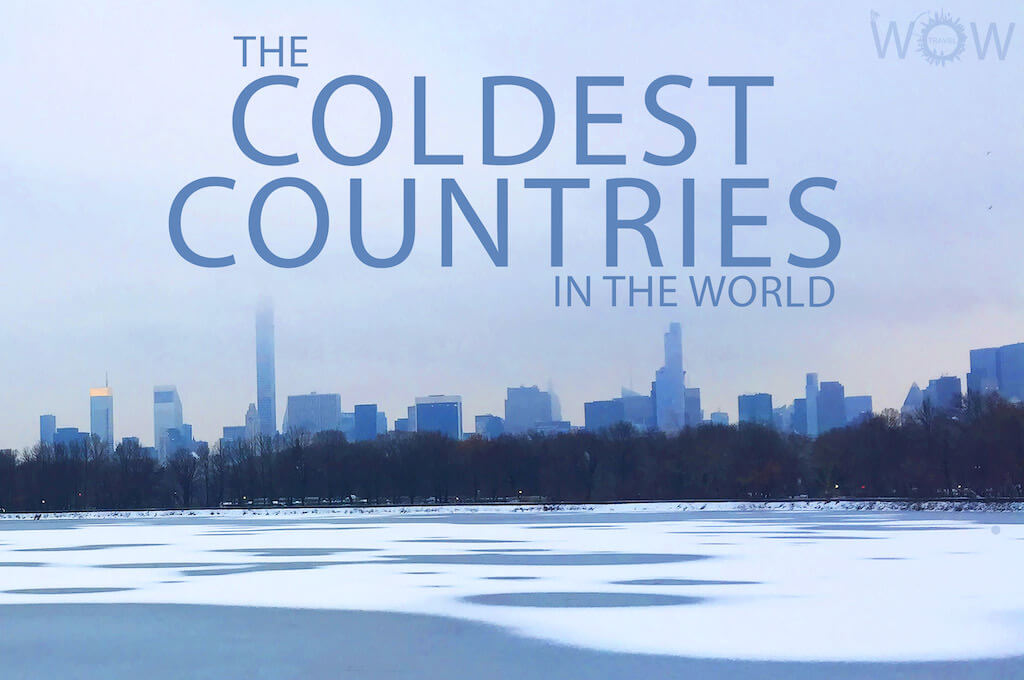 Have you ever wondered what the coldest country of the world is? Or which country has the longest winter? The past few years have seen winter temperatures in many places plummet to levels never seen before. In some of the coldest countries in the world, offices and schools have been shut and holidays declared on account of the cold. Consequently, it makes it somewhat difficult for people to cope with the changing weather patterns.

For people in some places on earth, however, living in temperatures below zero is just a way of life. Hot water thrown into the air freezes before it hits the ground is no big surprise. That’s just the way it has always been in these places. Some of the most coldest places in the world have places within them that are so cold that stepping out during winters can be quite dangerous.

Known as the last region on earth to be discovered, Antarctica is not a single country but a de facto condominium. This means that it is a political territory in which several countries have an equal stake governed by the diktats of the Antarctic Treaty System. The region is hardly fit for human habitation as it is the coldest, driest and windiest continent.

However, even though living conditions are extremely harsh here, there are about 1,000 to 5,000 people residing there throughout the year at research stations. But none of them live their lives there. They only travel in and out after staying for a period of time. With temperatures falling to as low as -80°C (-112°F), this frozen desert makes it practically impossible for humans to live a sustainable life there. Read what it’s like to be there in one of our articles: A Visit To The White Desert.

The United States of America is the third-largest country in terms of land area. Since it’s so spread out with so much variety in its geography, the country experiences almost all climate types. Predictably, the regions to the north experience a much colder climate, which has a subarctic or polar tundra climate. Alaska is the coldest state. The area near Fairbanks has the lowest temperature, with the mercury recording temperatures as low as -51°C (-60°F). This alone makes America one of the coldest countries in the world.

However, severe cold is not just confined to Alaska, but other states also frequently experience heavy snowfall and extreme cold. Some of them are the town of Stanley in Idaho and Crested Butte in Colorado, where temperatures are sometimes below zero. If you ever travel to Alaska, you must do the Mendenhall Lake Canoe Tour and see the majestic Mendenhall Glacier. Not enticing enough? See more reasons on our Top Things To Do in Alaska list.

Russia is commonly known as one of the coldest places in the world. It has many large open spaces resulting in the country becoming very windy. Places to the north of Russia have a subarctic climate with extremely cold winters, especially in the Republic of Sakha. One of the coldest inhabited places, Oymyakon, is located in this region. It has an average winter temperature of -50°C (-58°F) from December to February. Oymyakon has never recorded an above-freezing temperature in the months from late October to mid-March. During the winter, parts of Russia get so cold that water has to be supplied from outside the region. Indeed, this is due to the local water bodies being completely frozen.

The most inhabited coldest urban area on earth is located in Russia. You’ve probably heard of it on recent infamous news: Yakutsk. While cold places in other countries are barely inhabited, Yakutsk is the home to hundreds of thousands of people. The average annual temperature here is −7.5 °C (18.5 °F).

Like Iceland, Norway also has a more temperate climate due to the North Atlantic Current. The Arctic polar climate is modified by one branch of this current, which goes along the west coast of Spitsbergen. In mainland Norway, the coldest winters are experienced in Finnmarksvidda, but inland areas are much colder. The coldest temperature ever recorded in Norway was at Karasjok, situated in the far northeastern part. In January 1999, the official temperature was recorded as -51.2°C (-60.2°F), but unofficially the temperature was even lower.

Sandwiched between Russia and China, Mongolia is known for its vast grasslands and horse culture. Although Mongolia is referred to as the “Land of Eternal Blue Sky,” temperatures in winter can fall to as low as -30° C (-22°F) due to the shallow air that comes in from Siberia.

During winters, the country sometimes experiences a very harsh climatic condition known as ‘zud.’ It’s a condition unique to Mongolia. When this happens, a large proportion of the country’s livestock dies from freezing or starvation. Consequently, it adversely affects the economy of the largely pastoral community. If you travel to Mongolia during the summer, you could take a short drive to Elsen Tasarkhai. It’s a semi-desert region with endless dunes. There is even a Horse Ride Day Trip from Ulaanbaatar. Find out what else you can do here in Top Things to Do in Mongolia.

This world’s largest landlocked country is transcontinental. Kazakhstan is located in Asia and Europe. The country experiences an extreme continental climate with very cold winters and warm summers. The capital Astana is the second coldest national capital in the world, with winter temperatures dropping between -30°C to -35°C (-22 to -31° F). The city’s river is generally frozen between the second week of November and April. If you want to experience this beautiful country gully, take the Kazakhstan 7 Day Tour. It starts in Almaty, a place with many interesting things to do. The tour takes you through Tamgaly Tas, Aksu Zhabagly Nature Reserve, Astana, and many more beautiful places.

Unlike Greenland, the name Iceland is apt for this Nordic island country which has a large snow and ice cover. Rather surprisingly, though, Iceland does not experience as harsh winters as some other countries lying on the same latitude. This is mainly because the country lies in the path of the North Atlantic Current, making part of the region more temperate. In winter, the temperature in the Highlands of Iceland averages about -10°C (14°F). However, the temperatures in the northern part can fall to as low as -30° C (-22°F). Iceland is one of the best places to experience the northern lights during winters. Shelter yourselves at one of the 11 Best Hotels In Reykjavik, Iceland!

The name of the world’s largest island is quite paradoxical because three-quarters of Greenland is permanently enveloped in an ice sheet. That makes it more white than green. The average daily temperature of the capital Nuuk is not as cold as the rest of one of the coldest countries in the world. And it differs over the seasons, ranging from -8° C (18° F) in February to 7° C (45° F) in July. This is probably why it is one of the most inhabited places in the region, with one of the longest winters in the world.

However, during winters, the temperature in some places in Greenland falls to -50° C (-58°F). The lowest recorded temperature at the island’s center is -65° C (-85° F). When you travel to Greenland, spend at least two days in Nuuk. The secluded city of Nuuk offers an exciting selection of museums, buildings, and attractions that you must visit during your travel.

Finland, one of the world’s northernmost countries, is the most sparsely populated country in the European Union. It’s probably due to the prevalent harsh weather conditions, especially in winter. Due to its location, Finland falls in the boreal zone, a region characterized by freezing winters and warm summers.

Most of Finland experiences 100 days of winter. However, further north in Lapland, winter stretches for 200 days, with permanent snow covering from mid-October till early May; sometimes all the way to June. On very cold days, the temperatures in Lapland can fall to as low as -45°C (-49° F). The northernmost part of Finland does not see the sunrise for 51 days during winter. Moreover, the sun does not set for 73 days at a stretch in summer.

Next on our list of the coldest countries in the world is Estonia. It’s a small country located in Northern Europe. Although the country experiences a much warmer climate than some of the countries on this list, the erratic rainfall can cause the temperatures to plummet irrespective of the time of year.

The sub-zero temperatures of the country in winters are due to the monsoon winds. As a result, the region is extremely cold, and the country is perennially frigid. The average temperature in February is -5.7°C (21.7°F). Indeed, it’s the coldest month of the year. The lowest temperature recorded is -43.5°C (-46.3°F).

China is the most populated country on earth and the second-largest country by land area. And now it’s one of the coldest places in the world. Due to its vast area and varying topography, China experiences varying degrees of climate. It ranges from an extremely hot climate in the deserts to the freezing chill of the Himalayas. Unfortunately, the commoner faces many problems during the cold winter as the infrastructure and heating in rural China are not very good.

Harbin, the coldest city in China, is appropriately nicknamed the “Ice City.” The winter temperatures in the region can plummet to as low as -38°C (-36°F). The people of Harbin take advantage of being one of the world’s coldest countries by holding the Harbin Ice Festival.

And the world’s coldest country is Canada. It occupies much of the continent of North America. And as such, a large part of the Canadian Arctic is covered by permafrost and ice. The average temperatures vary across the different regions of Canada. However, the interior and Prairie provinces experience extremely harsh winters with temperatures plunging below -40° C (-40° F). What a climate!

In the past, temperatures in Yukon have dropped to as low as -60° C (-76° F) three times. Regions away from the coast can experience snowfall for almost six months a year. And further north, snow can persist throughout the year.

Facts about the coldest countries in the world: