Top 12 Things To Do In Benidorm 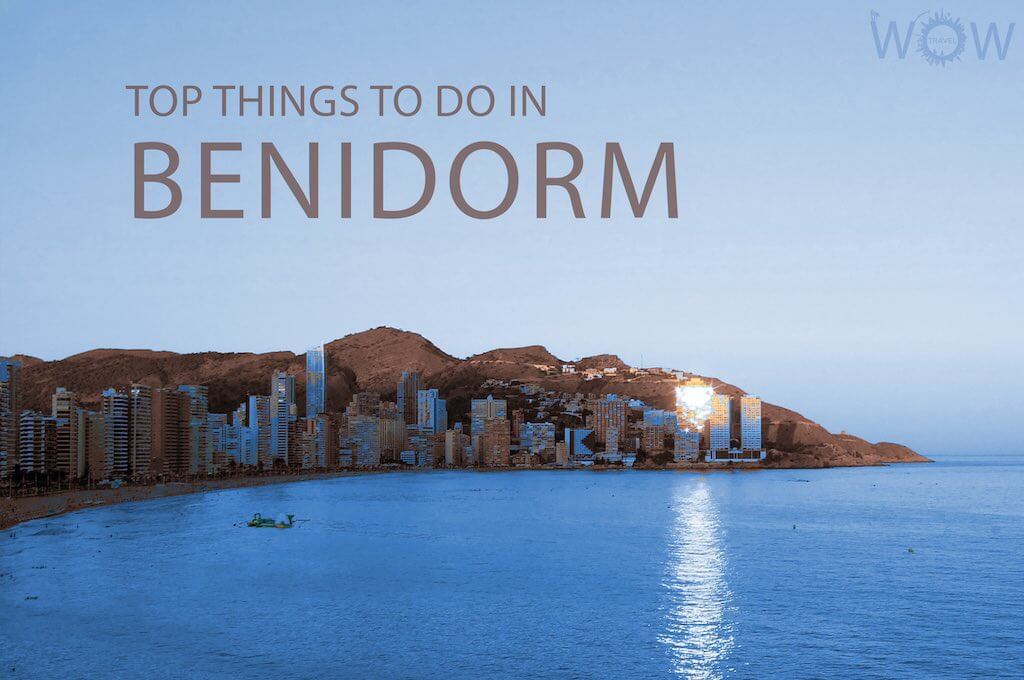 The city of Benidorm located in the province of Alicante in eastern Spain has been a popular tourist destination since the 1950s. This coastal resort attracts many visitors throughout the year. Besides the various attractions that make up Benidorm, it has a vibrant nightlife with numerous bars and clubs. What sets Benidorm apart from the other Spanish holiday destinations are the number of free cabaret acts that begin at nine and continue till the early hours. Benidorm has been referred to as the birthplace of package tourism as the initial visitors were the ones who came on packaged tours. Today the town is a popular destination for families and also a getaway for people from Northern Europe who make the town their home in the winter.
[booking_product_helper shortname=”benidorm”]

Benidorm Island is about 3.5km from the mainland, just about a 5-minute boat ride from Levante Beach. Many legends abound about the sudden appearance of this small island in the middle of the sea.  You can go hiking to the top of the island to enjoy some great views but be sure to protect yourself from the sun as there’s not much shade here. Boats ply frequently to the island which is a nature reserve and popular destination for diving too.

Located in the Old Town of Benidorm, Balcon del Mediterraneo is a great spot for a photo op. The overlook with its characteristic white balustrades and chequerboard tiles juts out into the sea, providing you with a beautiful expansive view. It also divides the Levante and Poniente beaches.

Less than an hours drive from Benidorm are the Canelobre Caves. These caves located at a height of 700 meters on the northern slope of Sierra Cabeco D’Or in Busot are a sight to behold. Visitors to the caves are impressed by the magnificent stalactites and stalagmites which have formed over thousands of years. The caves were closed to the public until the latter part of the twentieth century.  The acoustics inside the cave is ideal for musical performances which are often held here.

Levante Beach is probably one of Benidorm’s most defining pictures. The area is one of the most photographed spots in Benidorm. with its pale golden sands, surrounded by a line of skyscrapers.  The promenade with its restaurants and bars is pulsating with life and is a great place to hang out.

The place where the cross of Benidorm looks down at the city is a popular destination for catching a breathtaking view of the surroundings. It’s a 45-minute hike to the to and is best attempted in the fall when the weather is more pleasant. In 1961, the wooden cross that was installed at this point was built and carried to the top by citizens of the city to redeem the town of its sins. The original cross was blown away in a storm and a permanent monument replaced it in 1975.

Built on the site of a former castle which was destroyed during the Napoleanic wars,  this plaza sits high above Benidorm and its beaches. From this vantage point, you can avail of sweeping views of the highrises of Benidorm and the bay below. If you’re lucky you may be treated to some great music as musicians often frequent the area. The plaza is a popular location for weddings too.

Just 24km west of Benidorm is the mountainous town of Guadalest. The town surrounded by mountains is in sharp contrast to the beaches of Benidorm. One of the most visited sites of the town is the Castle of San Jose which is located on top of a rock. Another popular site is the Alcozaiba Fortress. For its small size, the town surprisingly has 8 different museums.

Unlike the energetic Levante beach just next door, Poniente beach is generally quieter which makes it a great place for families. A lot of has been invested in making the beach more accessible and the network of boardwalks to the beach is one such example. The beach is clean and perfectly safe to swim in.

If you’re in this part of Spain and traveling with kids, a great place to take them would be Mundomar.  Besides watching performing dolphins, you could also enjoy an amazing experience of swimming with these creatures of the sea if you book early. Mundomar is a modern facility and has large enclosures for its birds and sea animals.

Another great place to take the kids in Benidorm is the Terra Natura. The 79-acre park has been divided into four zones Pangea, America, Asia and Europe. Visitors will be able to see about 1500 animals of various species at the park. One of the highlights of a visit here is the Birds of Prey Shows. There is also a water park within the premises so its advisable to plan a whole day trip to enjoy the full experience of the park.

The region’s highest and most emblematic peak is a popular place for hikes. A 15-minute drive will take you the village of Finestrat from where you can get information about climbing the 1,406-meter high mountain. The climb to the top is definitely not for the fainthearted as it can get a little difficult at times. It’s a good idea to join a group or take someone along for the hike. Quite predictably the views from the top are quite unparalleled.

If you’re an adrenaline junkie then Terra Mitica is definitely the place for you. This themed amusement park inspired by ancient civilizations is one of the biggest and most famous in Spain. The three areas that the park is divided into are inspired by the ancient civilizations of Greece, Egypt, and Rome. Besides the huge rollercoasters and other rides, there are also various live performances and choreographed street shows.