Top 12 Things To Do In Cusco 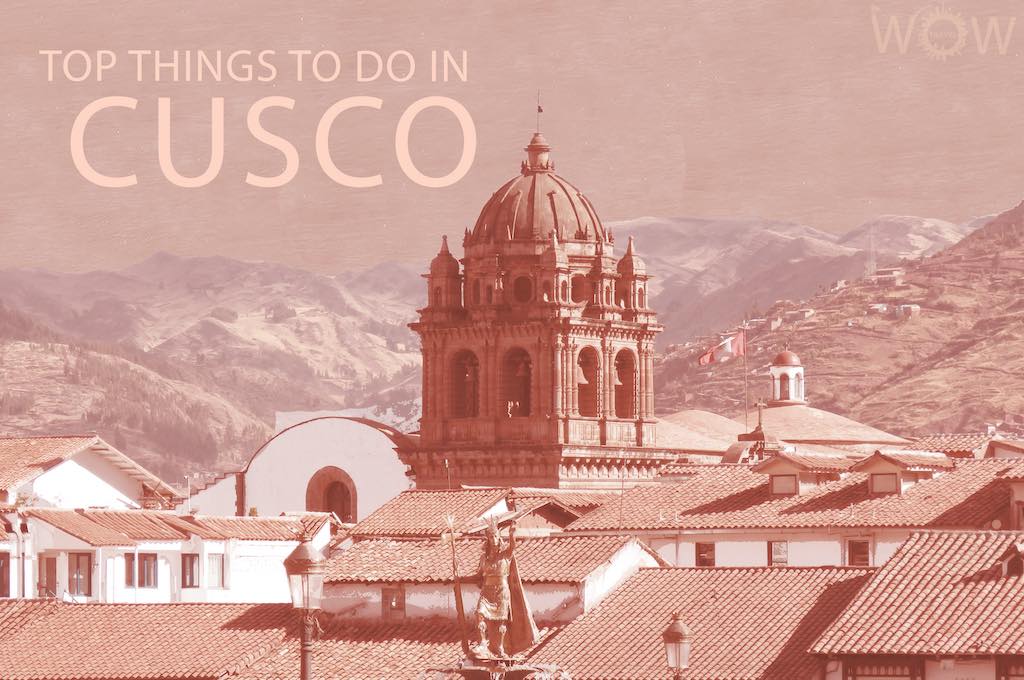 Sitting high up in the Andes at an elevation of 3,400 meters is the Inca capital, Cusco, designated as the ‘Historical capital of Peru.” This UNESCO World Heritage Site is the oldest continuously inhabited city in the Americas. Although the Spaniards demolished most of the important buildings of the city, they used the foundations for their colonial architecture. Cusco was rocked by three devastating earthquakes in 1650, 1950 and 1986, but despite the mass destruction of a number of colonial buildings, the Inca foundations have stood strong. Most people use Cusco as a stopover point to head to Machu Picchu and the other Inca centers in the vicinity, but the city with its rich heritage is definitely worth exploring.

The Inca ruins of the temple Coricancha (Q’orikancha in Quechua) make up the base of the colonial church and convent of Santo Domingo. Constructed in the mid-15th century, the temple was once the richest temple in the Inca empire. During its heydey the temple and the courtyard were literally covered in gold, hence its name which translates as ‘Golden Courtyard.’  About 700 solid-gold sheets, each weighing about 2kg lined the walls of the temple, and the octagonal font in the middle of the courtyard was also covered with 55kg of sold gold. Besides this, there were also other solid gold treasures which were all lost with the arrival of the conquistadors. The temple was looted and the gold melted down. All that remains of the temple today is the brilliant stonework which forms the base of the church. The 6-meter high curved wall which is visible from the inside and the outside of the church has withstood the violent earthquakes that Cusco has faced.

One of the most significant ruins in the immediate vicinity of Cusco is the massive Sacsayhuaman complex. This marvel of engineering is thought to be the remains of a much larger fortress which was destroyed by the Spaniards. Only 20% of the original structure remains as many of the stones from the walls were used by the Spaniards to build their own houses in the city. Three different areas make up the site, but the most striking is the three-tiered zigzag fortifications. Sacsayhuaman was designed as the head of a puma with the 22 zigzagged walls forming the teeth. The stones here are so massive that one weighs more than 300 tonnes. Engineers are amazed at the precision at which these massive blocks fit so tightly together without the use of mortar.

This baroque style Jesuit church was built in the 16th century on the foundations of the Inca palace, Huayna Capac, the last ruler of the undivided Incan Empire. It was reconstructed after the earthquake in 1650. When the church was being built it was surrounded by controversy as the Jesuits wanted to make this the grandest church in Cusco. The archbishop of Cusco, however, took offense to this development as he felt it would rival the cathedral. Eventually, on the intervention of Pope Paul III, the cathedral won, but by then it was too late as the La Compania church was near completion with one of the biggest altars in Peru.

The Plaza de Armas has always been at the forefront of Cusco’s life right from the time of the Incas. It was called Huacaypata or Aucaypata by the Incas and was the nerve center of the capital. Two flags are flown here – the Peruvian flag and the rainbow-colored Tahuantinsyon flag which represents the four quarters of the Inca empire. The plaza is flanked by some of the grandest historic buildings of the city including the cathedral and the La Compania de Jesus. The church of El Triunfo, the first Christian church in Cusco is situated at the right of the cathedral and the church of Jesus Maria is located on the left. Many people throng the plaza especially when it’s lit up in the evenings.

No trip to Cusco would be complete without visiting one of the most famous archeological sites in the world, the Inca city of Machu Picchu. Situated at an altitude of 2,438 meters in a jaw-dropping location, the 15th-century citadel is a marvel of Inca engineering. Massive crafted stones fit together in near perfection all over the site which has sixteen stone waterfalls in sequence down one side of the site. Although Machu Picchu was located only about 80 kilometers from Cusco it remained undiscovered by the Spanish and thus escaped the plunder. The site can be visited by taking a bus from the town of Aguas Callientes or by trekking the Inca trails. Read more about it on Machu Picchu Is The Incan Big Apple.

The grand cathedral is also another of Cusco’s buildings that were built on the site of an Inca palace. Construction on the cathedral began in 1559 and took more than a century to complete. The cathedral has one of the greatest collections of colonial art from the Cusco school which is noted for its combination of 17th-century European styles and iconography of indigenous Andean artists. One of the most famous paintings of this school of art is located in the far east corner of the cathedral. The painting of the Last Supper by Quechua artist, Marcos Zapata has been embellished with Andean features, specifically the food on the table. The oldest surviving painting in Cusco which shows the entire city during the earthquake of 1650, is also located in the cathedral

About 6.5km from Cusco at an altitude of 3,700 meters in the Sacred Valley is another interesting archaeological site of the Incas whose exact function still remains a mystery. Tambomachay is also known as El Bano del Inca or the Bath of the Inca possibly because of the constantly flowing water. A series of small aqueducts, waterfalls, and canals run through the terraced rocks of the region fuelling speculation that it could have served as a spa of sorts for the Inca ruler and the nobility. However, the precise water features of the site could also mean that it had a ceremonial function. Other archaeologists feel that the site could have been used for military purposes because of the terraced nature of the site.

To the northeast of the Plaza de Armas you’ll find the area of San Blas which sits higher up on a hill. The little streets from the north of the Plaza lead to this quaint neighborhood with its narrow cobblestone streets and small art galleries. The walk up the narrow streets is especially interesting as they are lined by ancient Inca walls. Along the east wall on the ancient Hatunrumiyoc is the famous 12 sided stone. San Blas Plaza is a popular spot for visitors, especially on Saturdays when colorful market stalls fill the area. At the end of the plaza is the simple San Blas church notable for its beautiful baroque, gold-leaf principal altar.

One of the few churches in Cusco that did not require a major overhaul after the earthquake of 1650 is the austere San Francisco Church. Located a few blocks southwest of the Plaza de Armas, the church although not as spectacular as the other churches in Cusco, has a few notable features. The large collection of colonial religious paintings and the carved cedar choir are some of the highlights of a visit here. There are also two crypts where the bones of their occupants have been arranged in patterns, a common feature of Franciscan churches. A museum attached to the church has a huge painting of the family tree of St Francis of Assisi, said to be the largest painting in South America, measuring 9m by 12m.

Puka Pukara is an Inca fortress which literally means ‘red fortress’ probably from the red color of the stones at dusk. This fortress which is located about 7kms from the city was part of the defense of Cusco. It is composed of large walls, staircases, and terraces. The fort overlooks the Cusco valley, providing one with spectacular views. There is not much information about Puka Pukara just like many of the Inca sites, but the popular theory is that it was partially a military base.

The third most important colonial church after the Cathedral and La Compania is the Basilica de la Merced which was also destroyed in the earthquake in 1650. The original church was built in 1536 but the present church was built between 1657 and 1680 after the earthquake. The tombs of Diego de Almagro and Gonzalo Pizarro, two of the most famous conquistadors are located on the far side of the cloister. A small religious museum containing vestments purportedly worn by conquistador and friar Vicente de Valverde is also located here. Visitors are especially drawn to the most famous possession of the museum, a priceless solid gold monstrance. This beautiful 1.2m high piece has 1500 diamonds, 600 pearls and is covered with rubies and emeralds.

About 50kms northwest of Cusco on a high plateau at a height of 3,500 meters is this gorgeous archaeological site containing unusual Inca ruins. Located in a remote area of the Sacred Valley, the terraced circular depressions with an irrigation system that make up this site are definitely a sight to behold.  The largest depression is about 30 meters deep. The real purpose of the site is not known but it is believed to be an agricultural laboratory of sorts given the microclimate that exists between the terraces. Whatever the purpose of the site, there is no denying the mysticism and beauty of this agricultural amphitheater.