Top 12 Things To Do In Mendoza 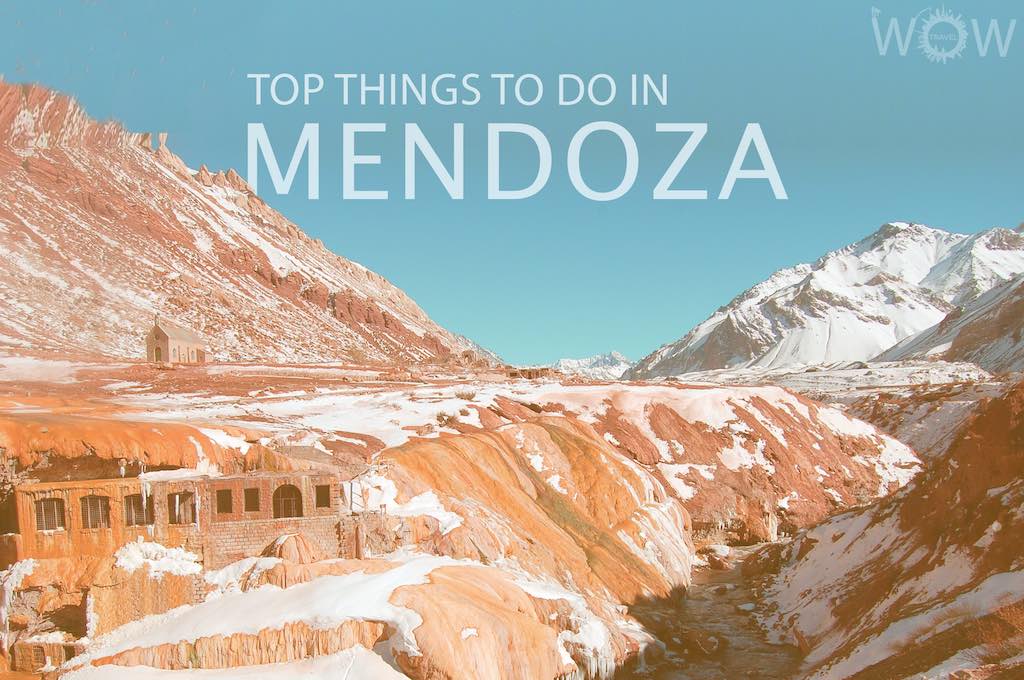 The City of Mendoza as it is officially known as is located in the northern central part of the province of Mendoza in Argentina. The bustling tree-lined city is a stopover point for climbers to Mount Aconcagua and also for skiers in the winter looking for easy access to the Andes. Mendoza is synonymous with wine and olives and is one of the largest wine-producing areas in Latin America. In fact, it is one of the nine Great Wine Capitals of the world. There are plenty of vineyards with breathtaking scenery in the surrounding areas to explore. Other than wine, the city has a vibrant nightlife which is concentrated on the Avenue Aristides where bars and restaurants dominate the sidewalks. During the day when not exploring the sights of the city, visitors can also partake in some adventure sports like rafting or exploring the Andes.
[booking_product_helper shortname=”mendoza”]

Named in honor of General Jose de San Martin, the leader of Argentina’s War of Independence, the extensive park covers an area of almost 1000 acres. Construction on the park began in 1896, while the impressive entry gates that were shipped from England were installed in 1909. There are 34 sculptures that decorate the paths and roads of the park and a beautiful lake. Facilities in the park include an equestrian center, playgrounds, a stadium, and tennis courts. An amphitheater which is used for the annual wine harvest also occupies a prominent place in the park.

The 6,962 meter tall Aconcagua is the highest mountain in the Americas and one of historical importance to Argentina and Chile. During the war with the Spanish Empire, the mountain range was crossed by General San Martin who during this daring raid was able to secure independence for Chile. The hiking trails up the mountain vary in the level of difficulty. It takes about a day to hike to the first base camp, Confluencia, where you can soak in the breathtaking surroundings. For the less adventurous, the Parque Provincial which the mountain is a part of offers some easier locations for spectacular photoshoots.

As the name implies, the Museo del Area Fundacional gives visitors a deeper insight into the foundation of the city.  Excavated ruins of the old town council (cabildo) which was destroyed by the earthquake of 1861, are visible at the museum. After the earthquake, the city was then moved to its present location. A series of dioramas at the museum shows the progression of Mendoza’s history. The only part of the old city that stands are the ‘Ruinas de San Francisco’.

This particular area of the Andes is renowned for its hot springs. During the Argentine boom in 1904, a huge spa was developed at Cacheuta to cash in on the natural springs. However, a glacial flood in 1934, completely destroyed the spa which never recovered from the devastation. Within the ruins of the original building, a smaller hotel was constructed in 1986. Visitors to the area can either indulge in a sauna, mud bath or enjoy a dip in pools of varying temperatures. There is also a waterpark that is part of the establishment with a lazy river and wave pool.

About 100 kilometers from Mendoza is the scenic village of Uspallata with some dramatic scenery. Just 1.5km from the town you’ll find these strange beehive structures that date back to the end of the 18th century. Built by the Jesuits, they served as mineral treatment plants for extracted material from the San Lorenzo mines. Today they have been converted into a museum where visitors can view the various apparatus that was used to treat the materials.

You’re spoilt for choice when it comes to wineries in Mendoza, but one of the best places to try out the world-famous Malbec is at one of the wineries in the Uco Valley. Widely considered one of the best wine regions in Mendoza, the valley is a prominent stop on the Argentina Wine Route. The location of the valley at altitudes ranging from 900-1,200 meters combined with natural irrigation from the Tunuyan River, alluvial soil and great weather conditions, is an ideal environment for thriving vineyards. There are numerous ‘bodegas’ to choose from, but a few that stand out in the region are Salentein, O. Fournier and Vines of Mendoza. Visitors also have the option of staying over at a few of the wineries.

The Independence Plaza located in the center of the city is a popular place with locals and visitors. The largest green space in the center of the city has an interesting fountain, walking paths and a museum. You can also find artisans selling their products on the weekends. After the devastating earthquake in 1861, when the city was redesigned, it was decided that spaces would be created that could also serve as a shelter from earthquakes. Hence five different plazas were created with Plaza Independencia being the most central.

The Cerro de la Gloria is a small mount located at the General San Martin Park. At the top of the mount is the huge memorial to the Army of the Andes for liberating Argentina, Peru, and Chile from the Spaniards. There is a motorable road to the top but if you’re up for some exercise a walk to the top is a good idea. The view from the top is quite rewarding with panoramic views of the mountains and city.

63km south of Mendoza is the center of Potrerillos, a district of the Lujan de Cuyo Department. Not very far from the center lies the artificial Lake Potrerillos, formed by a large dam on the Mendoza River. The lake is a popular spot with a few hotels, resorts and adventure clubs in the vicinity. It’s a great place to spend the day surrounded by some stunning beauty. Outdoor adventure activities like rafting, trekking and horseback riding can also be enjoyed here.

If you’re making the trip to Mount Aconcagua then this is a great location to add to your itinerary, en route to the mountain. The Puente del Inca is a naturally formed golden-colored arch (from the mineral springs in the region) over the Las Cuevas River. This natural bridge was probably created over a long period of time from the glaciers and hot springs in the region. The bridge which was supposedly used by the Incas was visited by Charles Darwin in 1835.

If you want to feel the buzz of the city, the lively pedestrian-only street, Sarmiento, is the place to experience it. Located close to the Plaza Independencia this tree-lined street that is filled with shops, cafes, and restaurants is always bustling with activity. You can enjoy sipping a glass of wine or coffee as you watch people and soak in the local vibe. However, if you’re looking for some great nightlife then head to the Calle Aristedes Villanueva.

Mendoza and its surroundings offer visitors the option of enjoying the best of both worlds. Whether its the bustling metropolis or the serene surroundings of the valleys, the choice is there for the picking. The town of Chacras de Coria, however, offers visitors a bit of both. Although tourism has brought about considerable expansion of the town, it still manages to hold onto its small-town charm. There are plenty of shopping venues and restaurants in the area which is also famous for its nightclubs. Young people from the city head to the town in the evenings to enjoy the nightlife. You can also begin your wine tour from the town as there are plenty of vineyards and bodegas in the surroundings.