Top 9 Things To Do In Lausanne 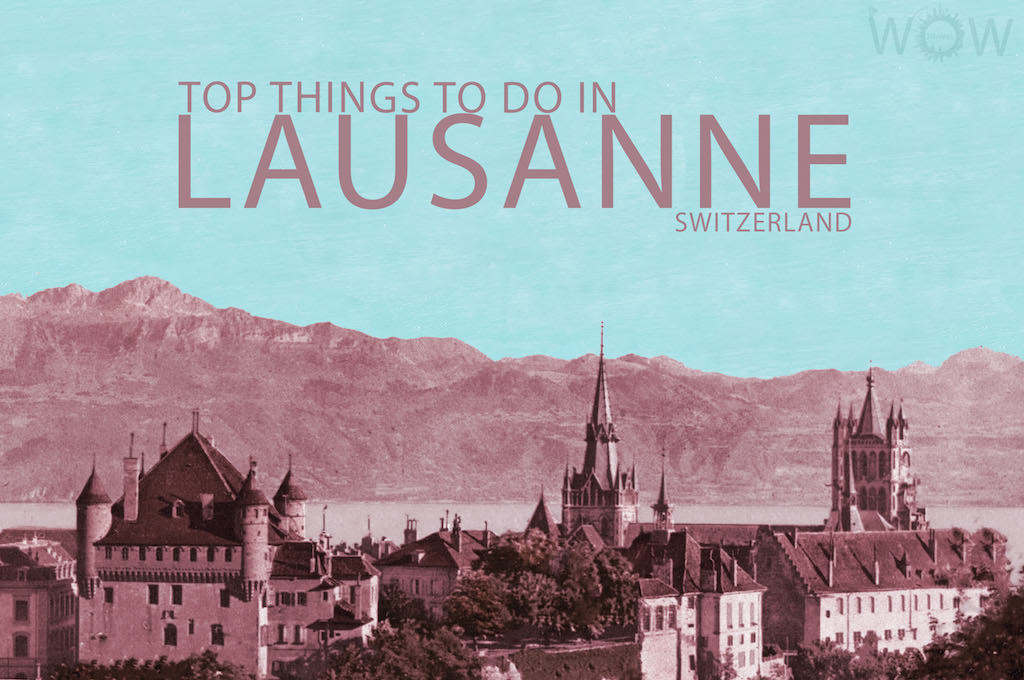 Smaller but livelier than its better-known neighbor Geneva, the French-Swiss town of Lausanne, is an old city located on the shores of Lake Geneva that enjoys wonderful views of the surrounding mountains. With its historic old town, impressive cathedral, wonderful outdoor markets, swanky bars and cozy cafes, Lausanne is definitely a pleasant surprise. Check out our list of the Top 9 Things To Do In Lausanne.

The largest cathedral in Switzerland, this gothic style cathedral was consecrated in the 13th century. In the 15th century, most of the decoration was removed by Protestants. Make sure to enter the cathedral to see the rose window which is the only remaining original piece of the church. In the 19th century, work began to restore the original decorations in the cathedral. Take note of the amazing organ that cost 4 million CHF to make. The cathedral is the only one that still has a watchman who climbs the tower and yells the time every hour from 10 pm to 2 am. Across from the cathedral’s main entrance, there is an unmatched view of the city, the waterfront, Lake Geneva, and on a clear day, the French Alps. Source: travels4couples

Château Saint-Maire is a magnificent castle on the northern hill above the old town. The Bishop of Lausanne ordered to build the Château Saint-Maire, and it was built from 1397 to 1406. As usual in this time, the fortress was built in cubic form and united both residential as well as safety functions. Till 1811, when today’s Canton government was housed in the castle, it used to serve as the residence of the bishops. To this day, the Saint-Maire Castle is a seat of the executive authority of the canton. Due to this function as the seat of government, the castle cannot be visited. However, you can stroll around the castle, admiring the impressive architecture and enjoying the lovely view of the city. Source: best-of-switzerland

In the southern portion of the city sits Ouchy, Lausanne’s chic lakeside district. On Sundays the tree and flower-lined walkways here bustle with walkers, cyclists, and skaters. It is the site of Eole, the famous wind vane created by Clelia Bettua. The semi-circular structure of the wind vane spans 20 meters in diameter and pivots in the wind providing wind direction for the local sailors

If you prefer taking a tour on a boat, enjoy a day trip to Chateau de Chillon and discover the splendors of Geneva Lake. Chillon Castle is an architectural jewel located in the most beautiful setting imaginable. This monument with over 1000 years of history has always inspired artists and writers, from Jean-Jacques Rousseau to Victor Hugo and Lord Byron, from Delacroix to Courbet.

Quartier du Flon is a mainly pedestrian city center district bustling with life, day and night, in a modern and innovative setting. During the day, it offers numerous retail facilities and entertainment opportunities: boutiques, restaurants, cinemas, beauty salons, health spas, art galleries and recreational spaces. When night falls, Quartier du Flon is thrilling to the sound of bars and clubs; it suits everybody’s taste. It is an interesting combination of, simultaneously historic and modern architecture.

Lined with old houses and the Renaissance facade of the town hall, Place de la Palud is  the main square of the old town, decorated with the beautiful fountain of Justice (16th-18th centuries). Nearby, an animated clock starts to move every hour. Behind the fountain, the picturesque covered wooden stairs give access to the cathedral.

The steps of the Escaliers du Marché, a direct but steep route from Place de la Palud up to the Cathedral, are one of the most picturesque sites in Lausanne. Their existence was first recorded back in the 13th century and its present-day appearance, a winding wooden stairway with a roof and a very steep cobbled street running alongside it, dates back to the years 1717-1719. Source: lausanne.ch

Built in 1270 by the Friar Minors of the Province of Bourgogne, this is the only old convent established since 1260 that has survived. The church was once the center of a Franciscan monastery set against the southern city walls. It is now a Protestant parish church.

Just 15 minutes ride from Lausanne you will find Vevey, one of the “Pearls of the Swiss Riviera”. Blessed with an extremely mild micro-climate, Vevey features a long promenade with beautiful arrays of palm trees and tropical flowers. Along the promenade, you can enjoy beautiful views of the French Alps on the opposite side of Lake Geneva. Here you will find the statue of Charlie Chaplin, one of the area’s famous residents; his family still lives in the region. The Grand-Place market square and the pedestrian zone of the old town are worth a leisurely stroll as well.