Top 9 Things To Do In Verona 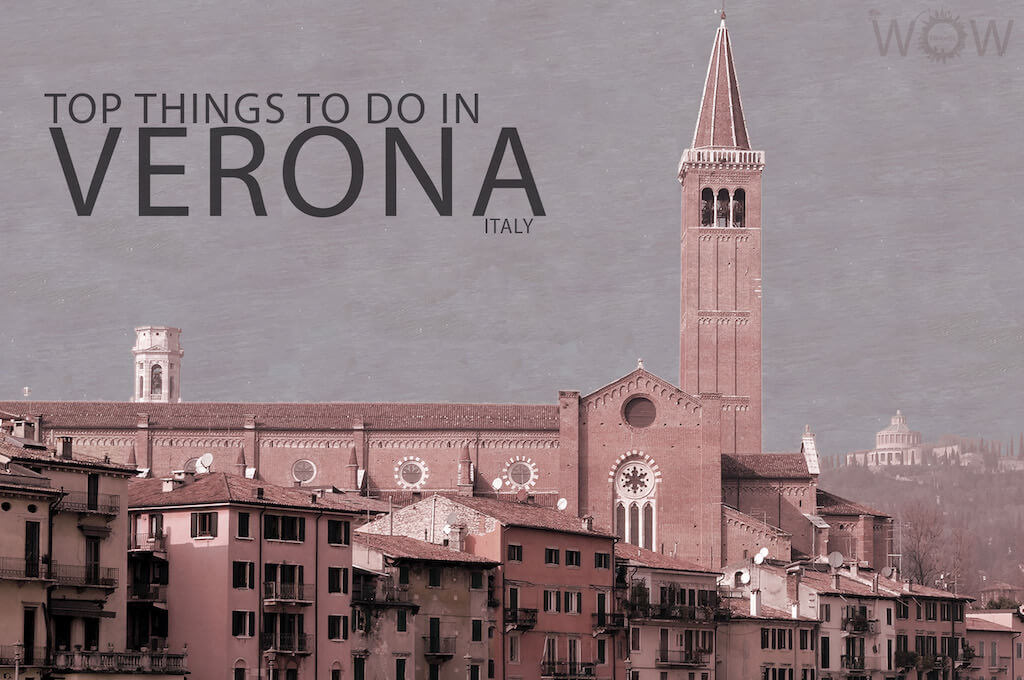 Verona, located almost halfway between Venice and Milan in Northern Italy, is a picturesque city filled with Roman ruins, Renaissance palaces and medieval buildings. Many of which belong to the UNESCO World Heritage and reflect the turbulent history of the city. Verona is known as the city of Romeo and Juliet and for its Roman Arena but there are many more attractions to see. Check out our Top 9 Things To Do In Verona.

The Arena, Verona’s original Roman theater was excavated in the mid-19th century and could host more than 30,000 spectators in ancient times. It is one of the best-preserved ancient structures of its kind and nowadays used to stage spectacular music concerts and opera. It is the second-largest Roman amphitheater after the Colosseum in Rome.

If you’re a romantic at heart, no trip to Verona would be complete without a visit to Casa di Giulietta (Juliet’s House). Although the house has no real connection to Shakespeare’s fictional heroine (Juliet never lived here, she is a fictional character and never ‘lived’ anywhere), this hasn’t stopped visitors making a pilgrimage to the site. And since Juliet’s famous balcony was added in 1936, the house has turned into one of Verona’s most popular tourist attractions. As well as Juliet’s famed balcony and the bronze statue of Shakespeare’s tragic heroine in the courtyard, the house is also home to a small museum. All the items on display are genuine antiques from the 16th and 17th century. The house was bought from the Cappello family by the city of Verona in 1905, and the similarity of their name to Capulet (Juliet’s surname in the famous play) resulted in the city burgher’s declaring that it was ‘Juliet’s House’ and so the famous tourist attraction was created. Source: ciao.citalia

Completed in 1463, Lamberti Tower is the highest tower of the Roman relics in Verona. Climb the 238 stairs and enjoy the beautiful scenery. The medieval bell tower was raised a few times until it reached its final height of 84 meters (275 ft). It is just off Piazza delle Erbe, near the Palazzo della Ragione.

Giardino Giusti is a private garden in Palazzo Giusti del Giardino, owned by the same family since XVI century. Pure Renaissance quintessence designed at the end of 1400 and reshaped as we see it today in 1570 by Agostino Giusti, a tuscan noble man inspired by the beauty of the Boboli Gardens in Florence, who moved to Verona from Tuscany. Besides the collections of flowers and important Roman ruins, the garden preserves all the original sixteenth-century features: fountains, acoustic caves, pergolas, Italian-style boxwood, mythological statues and a small yet complex maze.

Piazza delle Erbe is the most encient square in Verona and one of the most beautiful in Italy with its Renaissance-era palaces and lovely central fountain. Originally the site of the Roman Forum and chariot races, today it houses a busting flower and vegetable market along with a wide variety of charming cafes, bars and restaurants.

Learn the history of the Scaligero family, the ruling family of Verona in the middle age, with a visit to the impressive Castelvecchio and Scaligero Bridge. The 14th century Castelvecchio is located on the banks of the river Aldige and the adjoining, fortified bridge offers fabulous views of both the castle and the river itself. It was built in 1355 by the Scala family but was successively modified by future invaders such as Venetians, the French and the Austrians. The main castle includes the City Art Museum that filled with a diverse collection of sculptures, Renaissance paintings, jewelry and medieval artifacts.

Completed in 1138 on the ruins of an ancient Benedictine monastery, the Basilica of San Zeno is considered one of the most famous masterpieces of Romanesque architecture in Italy. The facade dominates the large square, and is flanked with a beautiful 72 meters (236 ft) tall bell tower. It is dedicated to the former Bishop and patron saint of Verona, San Zeno. He was born in Africa and converted the whole town to Christianity. Don’t miss the extraordinary 12th-century bronze panels on the doors with 48 elaborately-carved panels of biblical scenes.

Tombs don’t get much more elaborate than these! Just around the corner from Piazza delle Erbe, these five Gothic funerary monuments, considered some of the best examples of Gothic art in Itay, are hard to miss. They belong to members of the Scaligeri, who ruled Verona in the 13th and 14th centuries. Make sure you duck into the tiny, lovely church of Santa Maria Antica behind them. Source: walksofitaly

Also known as the “Golden Mile” of Verona, Via Mazzini is the main shopping street in Verona filled with luxurious brands and high end boutiques. It is running between Piazza delle Erbe and Piazza Bra. The Piazza Bra is Verona’s biggest and busiest square and is lined with numerous cafés and restaurants.