11 Most Dangerous Cities In The World 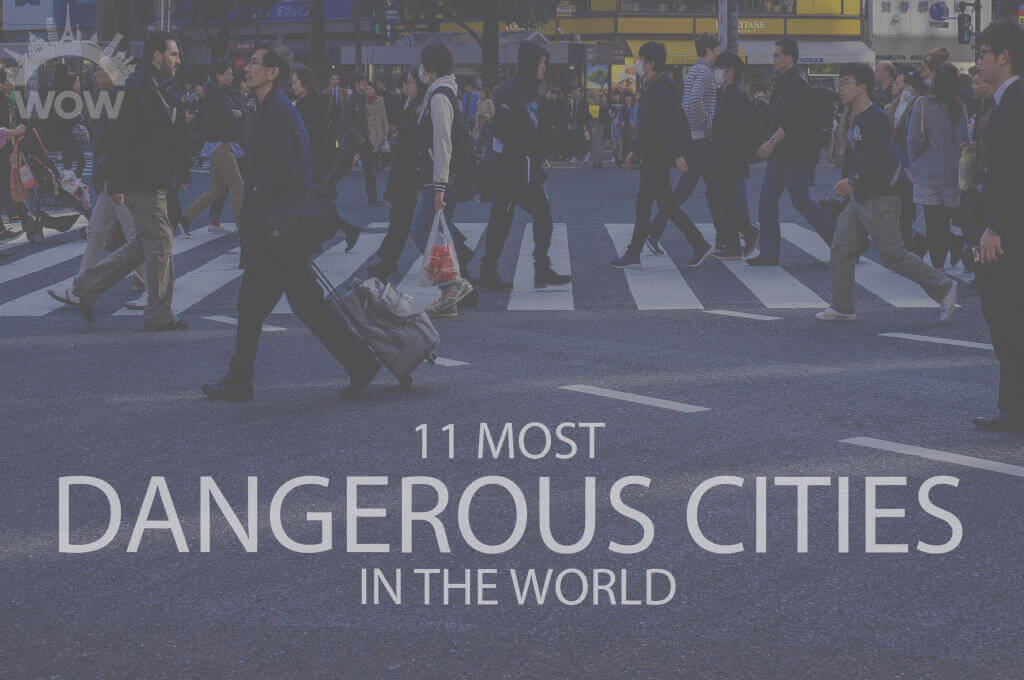 With so many thousands of cities to see in the world, there are seemingly endless cultures to experience and places to travel to. While seeing the world has its perks, but how safe are you exactly? Whether you vacation once in a blue moon or travel a lot for work or pleasure, it’s always important to know about the destination you’re headed to. This is all the more true when you’re looking to move somewhere, whether it’s temporarily or permanently. That’s why you need to know all about the most dangerous cities in the world. Now, danger has different connotations for everyone. But, many different acts of criminal violence make a city dangerous. Whether it’s theft, unemployment, or violent crime rates, even the smallest degree of each of these factors or a combination is what results in cities becoming dangerous.

Crime shows might be thrilling in reel life, but they’re the last thing you want in real life. Thus, you need to be aware of these dangerous cities so you can take care when you visit them. To that end, here are the 11 most dangerous cities of the world.

Despite being a gorgeous city and the base for exploring Angel Falls, one of the World’s Largest Waterfalls, being a dangerous city demolishes all of Ciudad Bolivar’s positive exposure. Located on the southern banks of the Orinoco River, Ciudad Bolivar is one huge mega-slum of sorts. Gangs, drugs, and violence run rampant here, with the homicide rate being a whopping 69 per 100,000 residents. The chief reason for the violence is active gangs, poor judiciary, and thus, poor law and order situation. Therefore, it’s best to avoid Ciudad Bolivar or be on absolutely high alert while visiting this city. In fact, many people are advised to travel in armored vehicles due to the high risk of robbery. If that wasn’t enough, heavy rain in the region even leads to flooding in crowded hillside slums.

It might come as a surprise to many, but Johannesburg is one of the world’s deadliest cities. Like most South African cities, an increased disparity between the rich and poor is one major reason for the crime. Displaying wealth, in fact, can lead you to get kidnapped, so travel without your valuables as much as possible. Increased poverty rates are another reason. In fact, the foreign offices and state departments recommend that travelers be vigilant, especially when they arrive at the airport. That’s because there have been incidents where tourists have been followed from the airport, held at gunpoint, and robbed. Additionally, we strongly advise against traveling solo in Johannesburg, and it’s always good to travel in a large group or with a guide. Finally, avoid public transport such as buses altogether.

It’s hard to believe that the city that lies across the Rio Grande from El Paso, Texas, is a place where your life hangs by a thread, but it’s true. Ciudad Juarez is one of the most dangerous cities of the world. With homicide rates of 86 per 100,000 residents, it’s now become a city that you want to avoid altogether. In fact, in 2010, when crime rates were at their peak, almost 10 people died violently every day. Even though murder rates have slashed to half in the last decade, the city still remains unsafe.

What’s more, the violence doesn’t target Americans specifically, which is why everyone needs to be on alert. Plus, the city reports many cases of burglary, robbery, theft, and carjacking, especially in the city’s dangerous areas. If that wasn’t enough, the city is especially unsafe for women.

Another South African country makes this list; this time, it’s Durban, the country’s third-largest and busiest port city. Despite having undergone a major makeover after the 2010 World Cup, poverty is still rife throughout the city. What’s more, there are high levels of serious crime, including murders, robberies, and, unfortunately, rapes. Another major reason for the violence is political instability. There are regular demonstrations throughout Durban caused by this very political unrest. Unfortunately, they can also turn violent very quickly. So, it’s best to avoid or get out of areas where you see political rallies or demonstrations taking place. In fact, the police regularly patrol the beach strip, with many cameras and lights around, making it one of the safer areas.

When you’re traveling through the city, avoid quiet paths and stick to the main well-lit streets. And don’t let the glitziness of the bustling Central Business District fool you. It becomes empty and dangerous at night.

Pietermaritzburg might be known as the “City of Flowers,” but things are far from rosy. An extremely high population and a very small police force are believed to be the chief causes for the high levels of crime. In fact, the city is considered South Africa’s crime capital. Public transport can be very dangerous in the city, so you need to take private transport at all times. Even then, you shouldn’t let your guard down then. Moreover, travelers are also advised not to walk around the city, both during the day or night, and stick to the main streets. Also, avoid taking out cash unless you’re inside your hotel or at a bank.

Behind the facade of colorful buildings and beautiful beaches, Fortaleza is an unsafe, crime-ridden city. In fact, it sits atop the list of Brazilian cities that have the highest crime rates. Moreover, these levels are continuously on the rise. Bag snatching and pickpocketing are very common, especially in more touristy areas. So, travelers need to keep their belongings safe and stay vigilant. However, Fortaleza is also infamous for being a prostitution hotspot and tourist prostitution. Single men, in particular, are drugged and then robbed. Additionally, gang violence adds to the high crime levels in this dangerous city. If that wasn’t enough, Fortaleza also has high homicide rates of almost 69 murders per 100,000.

The capital and largest city of Papua New Guinea, Port Moresby, is one of the most dangerous cities in the world. Violent crimes such as abduction and kidnapping are very high, mainly political tensions and civil unrest. Most of the time, tourists get caught up in the crossfire and are attacked. Additionally, crimes in the city range from gang-related to entirely random attacks, so you need to travel with extreme caution. Also, try and avoid traveling during the night entirely, as it’s not safe. Port Moresby, and the entire country in general, are also said to be the worst place in the world for women.

Pretoria is famously home to the National Zoological Gardens Of South Africa, one of the World’s Largest Zoos. It’s also one of South Africa’s three capitals, the other two being Cape Town and Bloemfontein. But, it’s also infamous as one of the world’s most dangerous cities. Travelers should avoid walking or even traveling around the city at night, even if they’re in groups. What’s more, armed robberies and gang violence are rife in this city. Civil violence is common, as is anti-foreigner violence, although that has been limited to immigrant workers until now. But still, Pretoria sees high levels of violent crimes and is the most dangerous city in South Africa by a huge margin.

The popular coastal city of Acapulco sits on the southwestern shores of Mexico, overlooking the Atlantic Ocean. It lies just six hours south of Mexico City and was considered the top Mexican coastal getaway once. However, it’s considered one of the most dangerous cities of the world. The former playground for Hollywood glitterati now sees a rampant drug war taking place on its streets. Most of the city’s hillside neighborhoods are strongholds for gangs such as Loc Locos or 221. Their long list of skill sets includes killing, carjacking, extortion, kidnapping, and assassinations. In fact, the city sees high homicide rates of 111 per 100,000 people due to this reason. And it’s this uncontrollable violence that’s also been the chief reason for the devastation of the city’s tourism industry.

Yet another Central American city makes this list of the world’s most dangerous cities; this time, it’s the Honduran city of San Pedro Sula. The city was infamous as the former “murder capital of the world,” especially after the 2009 coup when the Honduras military exiled the former president. That’s when crime levels and unemployment skyrocketed and have been rising ever since then. What’s more, even violence against LGBTQ people in the city is very common, with an alarming number of attacks and murders annually. In fact, the city’s violence rate is 111.03 homicides per 100,000. And even though it’s shed its infamy as the murder capital, the city is still prime for sexual assault, petty theft, and armed robbery. So, it’s best to avoid this city on your trip to Honduras.

Without a doubt, Caracas is the most dangerous city in the world, with a record of 119.87 homicides for every 100,000 residents. Caracas has constantly made it to this list, having even topped it once in 2017. It still occupies one of the top three spots for the world’s most dangerous places for more reasons than one. Despite being an important industrial, economic, and cultural hub, the city is rife with violence. The main reasons are poor law and order and extremely high levels of poverty. It’s also the least liveable city in the world as well as its cheapest city due to crumbling economic conditions and hyperinflation. In fact, Latin America has always ranked as the most violent region in the world outside of active war zones.