World’s 10 Most Dangerous Airports To Land 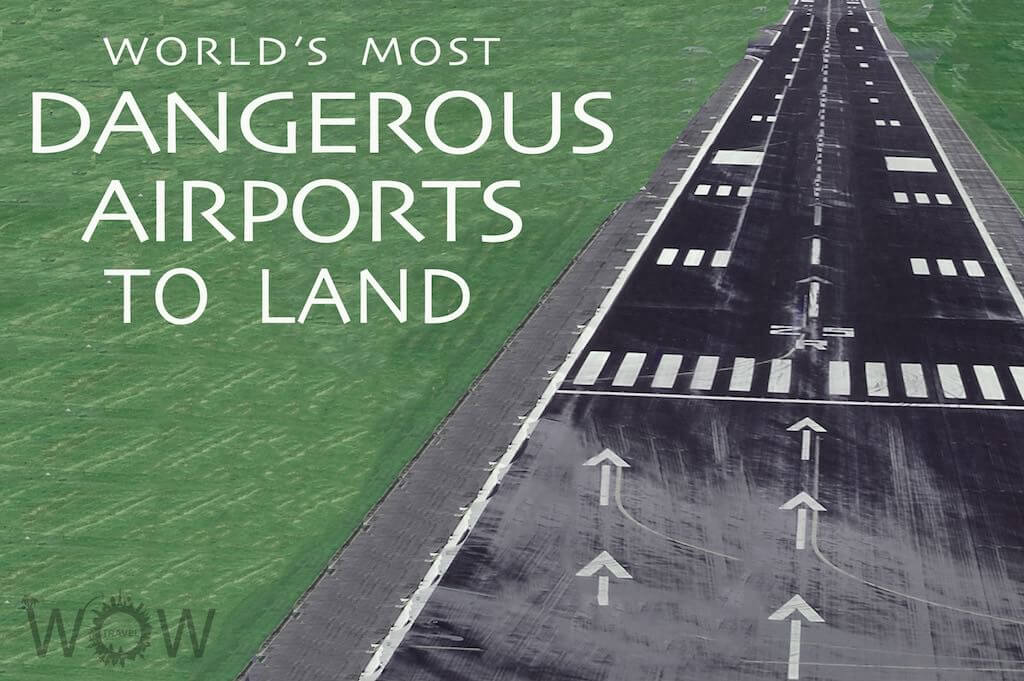 To reach some of the world’s most beautiful and remote locations, you may have to deal with a few scary takeoffs and landings along the way. Landing in an airport is usually a safe and fun experience, but certain circumstances make them really dangerous. You might want to avoid the following airports that have continuously shown to be The World’s Most Dangerous Airports To Land.

There is one catch to arriving at the Everest Base Camp trek start-point in Nepal, and that is flying into the infamous, perilously situated Lukla Airport. It is famous for being the place where the runway is so short that a few seconds after landing, the pilot must make sure that the plane comes to a complete stop to avoid falling some 1006 meters (3,300 ft). Accidents are common, between October 2008 and October 2013, four small Lukla-bound aircraft crashed, killing 33 people.

The Saba International Airport is located in the Netherlands’ island in the Caribbean called Saba. It has the world’s shortest commercial airport runway. It is 400 meters (1,300 ft) in total length.

The runway serves the United States Antarctic program. According to pilots that use it, the surface has the stability of cement and it could handle even comparatively big airplanes like Boeing 757. The trouble may occur when the plane comes to a stop, as it can sink the ice.

With an unusually short runway, rocky hills on one side and a sheer drop into the ocean on the other, it is recognised by pilots as one of the most difficult landing spots in Europe.

Courchevel Airport is a French airport that serves Courchevel, a ski area. The airport has a very short runway of only 525 meters (1,788 ft) with gradient of 18.5% and planes must touch down at inclined angles just to slow down.

Barra Airport is the only airport on the planet where scheduled flights use a beach as the runway. Flight times are dictated by the tide and the ‘runway’ is washed away each evening.

The airport which serves the British overseas territory has made full use of the minimal space and lack of flat land available by building its only runway through the main street of the city. Vehicles are made to stop every time an aircraft lands or takes off. Somehow there has never been a major accident.

“Small airports, short runways, and terrain are the three whammies of flying,” says Pilot Anonymous. Gustaf III Airport has all three. Its 640 meters (2,100 ft) runway begins at the base of a hilltop traffic circle, making for an abrupt and steep descent. At its end lies St. Jean Beach and its clear blue ocean. Though signs advise sunbathers not to get too close to where the runway meets the sand, it’s still a popular spot to soak up the rays. Source: airfarewatchdog

Toncontin Airport is one of the deadliest airports with 6 fatal crashes since 1989. It has a short runway, mountainous terrain and wind gusts due to its high altitude. The airport’s notorious runway “02” is one of the world’s shortest for big commercial jets coming in at 1,863 meters (6,112 ft). During descent, planes need to make a 45-degree bank to effectively reach the 2,133 meters (7,000 ft) runway located in a valley.

Princess Juliana International Airport serves Saint Maarten, the Dutch part of the island of Saint Martin. It is located In the middle of the northeast Caribbean Sea around 300 kilometers east of Puerto Rico. The airport is famous for its short landing strip — only 2,180 meters (7,152 ft), which is barely enough for heavy jets. Because of this, the planes approach the island flying extremely low, right over Maho Beach. Countless photos of large jets flying at 10-20 meters (30-60 ft) over relaxing tourists at the beach have been dismissed as fakes many times, but are nevertheless real. For this reason as well it has become a favourite for plane-spotters. Source: oddee