10 Most Impressive Impact Craters On Earth 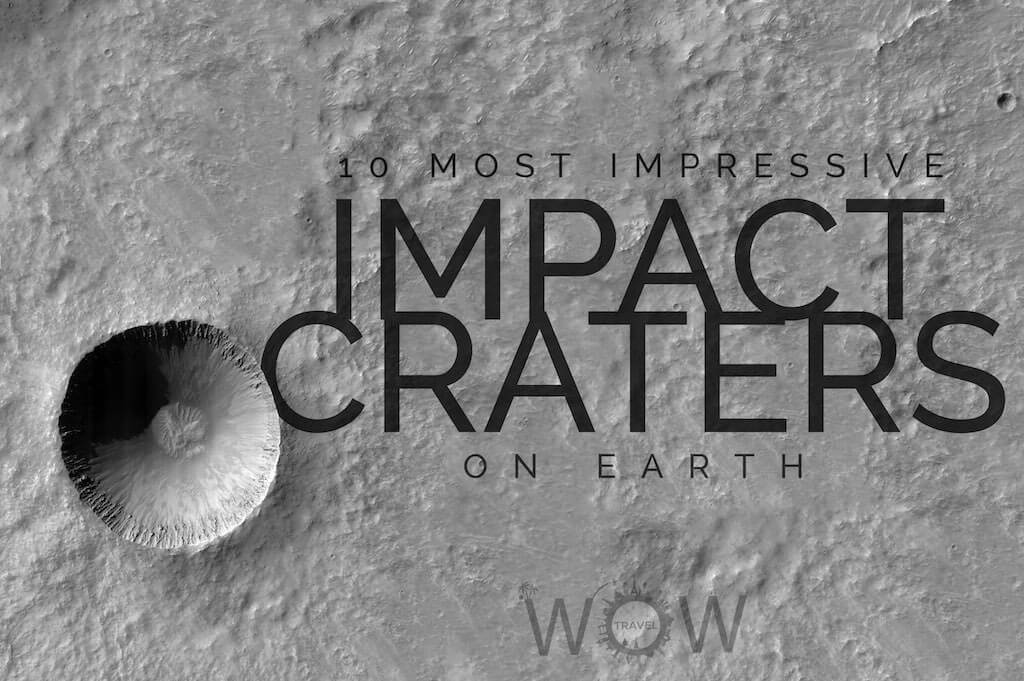 An impact crater, also known as meteorite crater is a crater created by a collision of a meteorite with the Earth surface. Our planet is dotted with 175 known impact craters that bear witness to occasional explosive encounters with large rocks from outer space, but surely our planet has endured more bashing than that in its history. All the other terrestrial planets and moons in our solar system are covered by impact craters. Today we will show you the 10 Most Impressive Impact Craters On Earth.

Aorounga is an eroded meteorite impact crater that formed 300 million years ago in an area of the Sahara Desert, northern Chad, in Africa, when an asteroid with a 1.6 km (1 mile) diameter hit the crust of earth and left scars in the landscape. It has a diameter of about 17 km (10.5 miles). Scientists are using radar images to investigate the possibility that Aorounga formed as part of a multiple impact event.

On the world map Lonar Crater is slowing carving its mark, as the third largest crater on earth in the Buldhana District of Maharashtra. This crater is the world’s oldest meteorite crater in the world and only meteorite crater in basaltic rock. It may appear unimpressive from a distance but once you catch the view of its curve you will leave only exploring its nook and corner. A beautiful saline lake inside this crater and thick forests around is a real visual delight. Source: shubhyatra

Meteor Crater has blasted out of the surrounding sandstone about 50,000 years ago, and the dry Arizona climate has kept it close to impact-fresh ever since. That stroke of good fortune, however, was wasted on America’s geologists, who for years insisted that the Crater was just another dead volcano. Daniel Barringer, a mining engineer from Philadelphia, believed otherwise. He bought the Crater in 1903, convinced that it was made by a huge meteorite. He also believed that if he could find that meteorite buried somewhere beneath the crater floor, he’d be rich. Daniel was right about the Crater, wrong about the meteorite. He drilled a 426 meters (1,400 ft) deep shaft, found nothing, and died in 1929 when he ran out of money. Source: roadsideamerica

The Monturaqui Crater is located near Peine, Chile and it is the most impressive meteorite craters in South America. The present dimensions of the crater are approximately 305 meters (1,000 ft) in diameter and 30 meters (100 ft) deep. The impact probably occurred more than 100,000 years ago. The impacting body was most likely a coarse octahedrite of group I related to the Canyon Diablo meteorite from Meteor Crater in Arizona.

Amguid crater is an impact crater located in a remote and inaccessible region of southwestern Algeria. It is 450 meters (1,476 ft) in diameter and the age is estimated to be less than 100,000 years. The crater is exposed to the surface. The crater cannot be approached by car because of the rocky terrain. The nearest inhabited place is more than a hundred km away, although just 13 km (8 miles) north of the crater is a permanent guelta surrounded by pre-Islamic tombs, which suggests that the place has long been inhabited. Source: amusingplanet

Located to the east of the Hudson Bay, what appears to be two separate lakes is actually a single body of water that fills two depressions. The depressions were created by two meteorite impacts, believed to have hit Earth simultaneously up to 290 million years ago. The larger of the two to the northwest is about 36 km (22.3 miles) in diameter and has a ring of islands in the center. The smaller is about 26 km (16 miles) in diameter. A string of islands separates the two water-filled craters. The name ‘Clearwater Lakes’ comes from the clarity of its water. The surrounding terrain is dotted with smaller lakes and rivers. The topography of this area, known as the Canadian Shield, was shaped by the huge ice sheets and glaciers from the last ice ages covering the area up to 15,000 years ago. Source: spaceref

The almost perfectly circular lake of the Ungava Peninsula of Quebec, Canada was formed by a meteorite plummeting from space and impacting the earth almost 1.4 million years ago. It is surrounded by a near-lunar landscape and filled with pristine water that is covered with ice-nine months out of the year. The lake is made unique by its inlets and outlets. Precipitation is the only source of water, and loss of water can only be the result of evaporation. At 396 meters (1,300 ft) deep, Lake Pingualuit is one of the deepest lakes in North America and one of the clearest lakes in the world. The circumference of the lake rises about 158 meters (520 ft) above the surrounding land and marks the highest point of the region. The bulge was a result of the explosive impact of the meteorite that had fractured the rocks surrounding the area and increased their volume. It is assumed that the rims of the lake were higher before the ice ages, which carried away any sediments of the meteorite. Although it is a young crater by geological standards, it is speculated to have lived through two ice ages. Source: atlasobscura

The Wolfe Creek meteorite crater is the second largest crater in the world from which fragments of a meteorite have been collected. The crater is 880 meters (2,887 ft) across and almost circular. Wolfe Creek in Australia was formed by a giant meteorite that crashed into the earth 300,000 years ago. The 50,000-ton meteorite impacted with a speed of 15 km (9.3 miles) a second.

Some 220,000 years ago a blazing stony meteorite, the size of half a football field, slammed into the earth’s crust. The impact formed a huge crater, 1.4 km (0.9 miles) in diameter and 200 meters (656 ft) deep. This crater is one of the best-preserved meteorite impact craters in the world. From 1912 to 1950 an industry producing soda ash and salt was based at the crater. Major attractions, besides the crater, are an extensive wetland system, the large variety of plant species of the Sourish-Mixed Bushveld, and 240 species of birds. From the start, the Tswaing project has invited community participation in its planning and development. Local communities have already benefited from the Museum project through job creation, skills training, environmental education, income-generating projects and tourism. Source: ditsong

18 km (11 miles) from Kuressaare towards Kuivastu is the location of Estonia’s most unique geological object, Kaali lake. Kaali is a group of 9 impact craters formed 4,000-7,600 years ago, as a meteorite broke into pieces at an altitude 5-10 km (3.1-6.2 miles) and fell to the surface in fragments.