11 Cool Bridges From Around The World 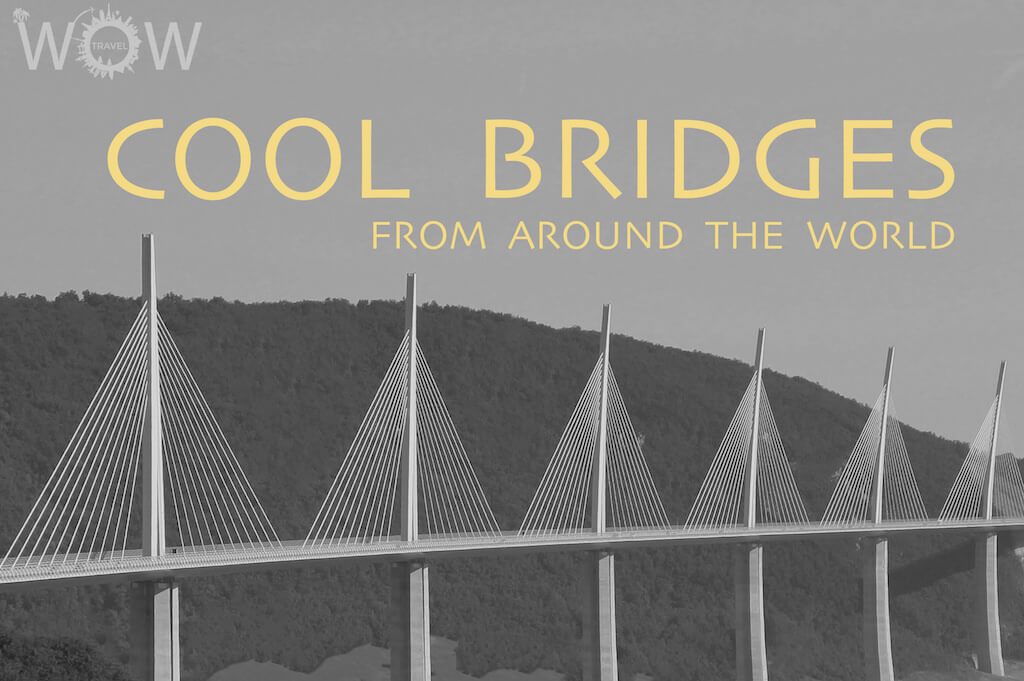 There are thousands of bridges in the world, most of which are likely utilitarian. Yet some engineers take it upon themselves to make their creations unique and eye-catching, almost like works of art. Sure, some bridges are pretty like the Brooklyn Bridge. But what about the ones that stop you cold? The ones that cause you to think: “How’d they do that?”. WOW Travel shares with you the 11 cool bridges from around the world that are intriguing to both the eye and the mind.

What’s special about this bridge is its ability to allow boats and other water traffic to move underneath it, despite being relatively low to the surface of the river. Mini hydraulic rams on each side of the bridge tilt it back on special pivots, lifting the bridge out of the way of those attempting to go underneath. Its nickname is the Blinking Eye Bridge.

The Langkawi Sky Bridge can be accessed via cable car. The bridge is a 125 meters (410 ft) long curved pedestrian bridge above Gunung Machinchang roughly 700 meters (2,300 ft) above sea level. Once you travel up the mountain via the cable car, the bridge gives tourists the opportunity to view some of the most beautiful sights of the Malaysian mountains and rainforests.

This nearly 275 meters (900 ft) pedestrian bridge is the highest of its kind in Singapore, connecting two parks. The bridge has a wave-form made up of seven undulating curved steel ribs that alternately rise over and under its deck. The curved ribs form alcoves that function as shelters with seats within.

The Kawazu-Nanadaru Loop Bridge consists of two spirals, each 1.1 km (0.7 miles) long, 80 meters (262 ft) in diameter – the only way for traffic to get down the mountainside into the valley, too steep for any other usual road-building solutions. The busy Route 414 serves the weekend crowd from Tokyo, intent to wind down at the hot springs resort of the Izu Peninsula. Built in 1981, the double-spiral structure demands careful driving, the speed limit on the bridge is only 30 km/h, which also helps to better enjoy the views.

This unique bridge is found in the Paddington Basin area of London. Something that makes this bridge so special is how every Friday, the octagonal shape rolls out to reveal itself as a bridge. Later on during the day, it will curl itself back up into its original form, hiding away again until it reemerges the next Friday. The bridge uses hydraulics to achieve this and it was completed in 2004. It was designed by Thomas Heatherwick, who also designed the London 2012 Olympic and Paralympic Cauldron.

Designed by French structural engineer Michel Virlogeux and British architect Norman Foster, the Millau Viaduct is the 12th highest bridge in the world, at 270 meters (890 ft) above the road deck.

It’s enough to make even the most fool-hardy of motorists turn their car around, But this apparent road to nowhere is merely an optical illusion dubbed the drunken bridge. Situated on the west coast of Norway on the Atlantic Road, the Storseisundet Bridge is so dramatically shaped it has featured in television adverts. It sits on the 8km (5 miles) long road which was constructed in 2005 and has become hugely popular with tourists.

The Slauerhoffbrug, located in Leeuwarden, was designed by Van Driel Mechatronica and is a fully automatic bridge with the ability to sense and adapt to its surroundings. It’s very Terminator-like in its ability to quickly sense and transform to the position needed, allowing ships to pass. You definitely don’t want to get on this bridge’s bad side.

The Moses Bridge, the Netherlands

Designed by architecture group RO & AD, The Moses Bridge is constructed out of Accoya wood, a hi-tech wood that is supposedly harder and more durable than some of the best tropical woods. It is treated with a non-toxic anti-fungal coating to maintain its split-the-water functionality..

Connecting Borneo Island and Sporenburg, the Pythonbrug was named in accordance with its quite unique form: the brilliantly red footbridge rises tall like a twisting snake. Designed by the architect house West 8, the bridge was completed in 2001. You need to be in shape in order to cross the bridge, as it resembles a complex playground attraction; however, the view from the bridge makes it certainly worth the effort. The silver lights that illuminate the Pythonbrug at night are extraordinarily shaped into seagull heads. Parallel to the Pythonbrug runs a lower bridge, the other part of the bridge complex, allowing for more conventional movement of pedestrians and cyclists.

Made of steel and concrete, This bridge crosses Lake Paranoa. It links the southern part of the lake, and St. Sebastian Paranoa the Pilot Plan, through the Monumental Axis. The main span structure has four supporting pillars submerged under Lake Paranoá, and the deck weight is supported by three 61 meters (200 ft) tall asymmetrical steel arches that crisscross diagonally. Architect Alexandre Chan, who designed the bridge wanted to avoid straight lines on the deck in order to accentuate Brasilia’s striking sunsets. The bridge has a pedestrian walkway and is accessible to bicyclists and skaters.