12 Beautiful Villages In Italy Worth Visiting 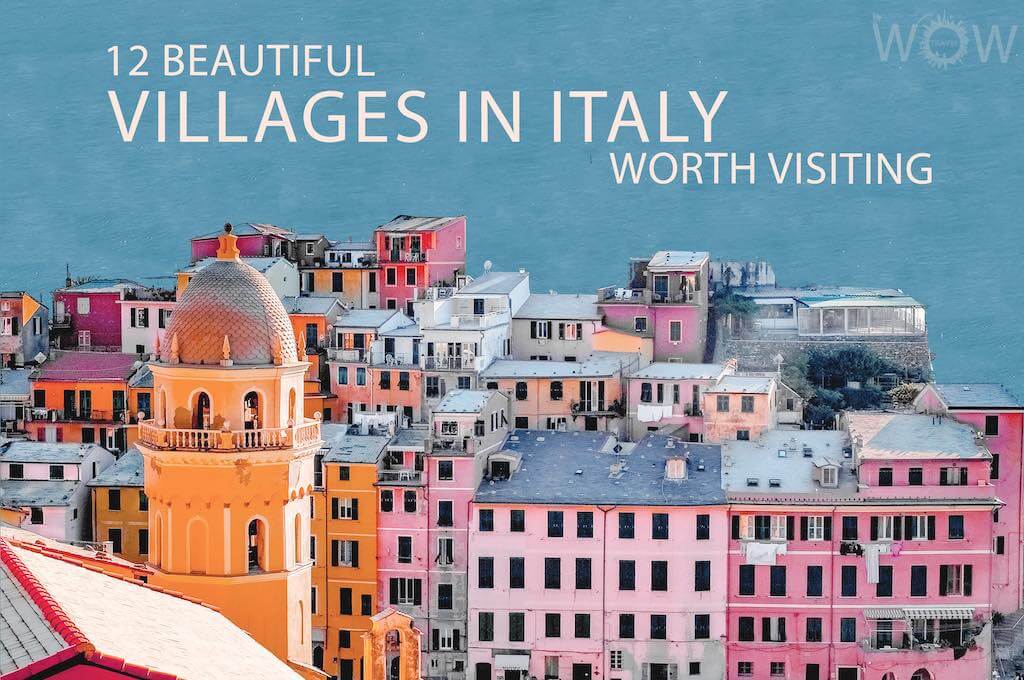 Most people travel to Italy to marvel at the historic sites of Rome or to soak in the beauty of Florence and Venice, or marvel at the fashion in Milan, but not many actually go off the tourist track to explore Italy’s hidden gems; its beautiful villages. Nestled between majestic mountains, perched on the edge of cliffs or tucked away behind verdant hills, the 294 villages that are spread out over the country are definitely worth exploring. Easily accessible from the main cities, many of these villages date back to Medieval times and some are so well preserved that walking through them is like a step back in time. Whether its the history or the scenic beauty, each village has a distinct identity of its own. From its culinary habits to the various traditions that are followed, exploring the beautiful villages of Italy will definitely satiate the wanderlust.

The pearl of Lake Como is the beautiful village of Bellagio, sitting prettily on the cape of the landmass that divides the lake. The main center of the town is situated at the tip of the promontory, whilst the historic center is about 350m southwest of the promontory. Bellagio traces its roots to ancient times, as far back as the 7th to 5th centuries BC. Cobblestone lanes and winding steps add to the old world charm of the old town. The Romanesque San Giacomo Church and the 18th century Villa Serbelloni are some of the notable buildings in the town.

The medieval town of Bosa was founded in 1112 about 3kms inland on the north bank of the Temo River.  It is divided into two distinct sections by the river that runs through the town. Pretty artisan dwellings vie for space among lavish palazzos in Bosa, whilst the Malaspina Castle stands grandly, overlooking the town.  When the town was initially built most of the population centered around the seaside but after the castle was built, people gradually began to move to the hills. The urban character of the town sets it apart from other locations in Sardinia.

Sitting at an elevation of 1452m, the picturesque village of Castellucio is the highest settlement in the Apennines. The snowcapped mountains are the perfect backdrop to the village which has been around since the 13th century or slightly earlier. The lush green plains below the village are transformed into a riot of colors from late May to early June when violets, red poppies, and rapeseed bloom. However, the devastating earthquake in 2016 and 2017 caused great damage to the village, forcing evacuation of all its inhabitants. It has since been restored and as of 2018 open to the public again.

Not very far from the border of Austria in Italy’s South Tyrol region is the German-Italian speaking village of Castelrotto. Situated in a verdant valley amidst Alpine peaks and vineyards, the village is a delight for hikers and nature lovers. The fusion of northern and Mediterranean cultures in this resort town traces its roots to the Austro-Hungarian Empire that the village was once a part of. The walls of many of the houses are covered in colorful paintings by famous 19th-century artists. During the winter the village is a popular destination as a family ski resort with a fun park.

Celebrated in paintings by renowned Italian painter, Antonio Discovolo, the colorful fishing village of Manarola is a popular summer destination. With houses dating back to the 12th century, Manarola is the oldest of the five villages of the Cinque Terre. Bright colorful houses rising up from the rocky coastline give this romantic village its distinct character. A natural panoramic balcony from Via Belvedere provides great views of the Ligurian Riviera. Other highlights of a visit here include hiking trails, vineyards and the famous walking trail between Manarola and Riomaggiore.

Located in the Basilicata region of Southern Italy, the medieval town of Matera with its ancient dwellings on the slope of a rocky ravine, seems like a land frozen in time. Featured in over twenty films and also one of the 2019 European Capitals of Culture, Sassi di Matera is one of the oldest continually inhabited settlements in the world. However, the inhabitants of the town were forced to move out to the new town by government policy in the 1950s. Until the late 1980s, the area was still considered a region of poverty and dangerous to live in but recently there has been a regeneration of the Sassi as the Italian government has taken proactive steps to promote this beautiful ancient town.

The oldest fishing village of Procida, a small island off the coast of Naples, is the idyllic Marina Corricella arranged like an amphitheater overlooking the sea. The collage of varied hues of the houses rising up from the shore, make this one of the most beautiful villages in the region. The 17th-century village has been able to maintain its culture and easy laid back atmosphere as it is not easily accessible. From the highest point on the island, the Fortress Terra Murat the expansive views are quite stunning.

Pietrapertosa is another picturesque village of the Southern Dolomites of the Basilicata region. The pretty village sits at an elevation of 1000m in the clefts of a huge rock, from which it gets its name. Ancient ruins of a ninth-century castle add to the allure of the village, but one of the main attractions here is the ‘Angel Flight,’ one of the highest zip lines in the world. From the highest peak of Pietrapertosa to the village of Castelmezzano, adrenaline junkies enjoy the thrill of gliding over some of the most rugged landscapes.

The historic village of Pienza in Tuscany was renamed by Pope Pius II to mean ‘city of Pius’ when he got the entire village redesigned as an ideal Renaissance town in the 15th century. The village was planned as a retreat from Rome but the planning that went into rebuilding was soon adopted as a model by other Italian towns and cities. Perched on a landscape with verdant rolling hills, Pienza is filled with architectural masterpieces such as the Piccolomini Palace and the Pienza Cathedral built during the Pope’s time. It was declared a UNESCO World Heritage Site in 1996.

One of the most scenic places in Northern Italy is the Val di Funes in the Dolomites region where the picturesque village of Santa Maddalena lies. Santa Maddalena with just over 350 inhabitants is a photographer’s delight with the verdant valley and breathtaking Odle mountains forming a perfect backdrop to this beautiful hamlet with its iconic church. Legend has it that the miraculous image of Santa Maddalena was washed up by the Fopal river in this region. Many hiking trails begin here and during the winter a chair car to the slopes begins here.

The beautiful historic town of Scanno encircled by the Majella mountains in the Sagittario Valley was catapulted into the public imagination by renowned photographer Henri-Cartier Bresson in the 1950s. Bresson’s photographs of the town featuring its residents in traditional clothes piqued the interest of many, putting Scanno on the tourist map. The town’s architecture is a mix of Gothic, Romanesque and Baroque styles. In the past, affluent shepherds competed with each other to commission the most beautiful houses and structures, leading to the growth of an impressive town. The heart-shaped Scanno lake that the town looks down on is said to be endowed with magical powers.

One of the most authentic fishing villages on the Italian Riviera is the kaleidoscopic Vernazza with its elegant houses overlooking a natural harbor. Also part of the five Cinque Terre villages, it dates back to the 11th century as an active maritime base of a noble Italian family. Vernazza played a vital role in Genoa’s conquest of Liguria in the 12th and 13th centuries. An 11th-century castle at the tip of the harbor provides some impressive vistas of the surrounding landscape.