12 Terrifying Rope Bridges Around The World 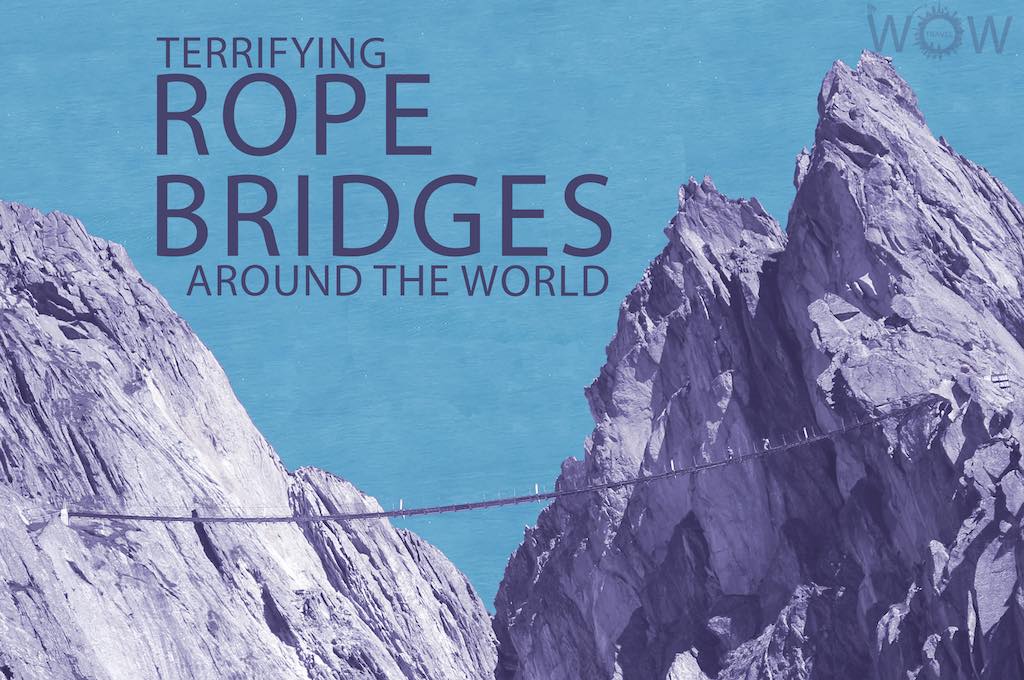 A rope bridge, sometimes called simple suspension, is a type of bridge which is supported by anchors on either side and usually hangs over a body of water or gorge. Rope bridges can be extremely scary, but there are some which take the fear factor to another level. Here is a list of some of the scariest in the world.

Taman Negara is one of the world’s oldest rainforests and perched in the thick of the canopy is a 530-meter-long bridge known as the Taman Negara Canopy Walkway. It is the longest canopy bridge on Earth, and it stands approximately 40 meters above the ground. Initially built to help biologists get a tree-top view of the wildlife living in the canopy, it is now open to visitors and other wildlife enthusiasts.

The Kotmale Oya Bridge, which is located in Sri Lanka, was built over the rough and muddy waters of the Kotmale River. The holes from the decayed wood in the flooring and the rusty metal let you know that the bridge has been around for some time. Because of the poor maintenance, not many people make the trip, but there are some who are still willing to cross it.

The Rope Bridge in Astore Valley may be the scariest of them all. Made up of uneven wooden boards and iron wires, and decreasing ropes to hang onto, safety was not the top priority when this bridge was constructed. Named after the river it crosses over, very few people use the bridge today.

Carrick-a-Rede Rope Bridge is one of the most popular attractions in Northern Ireland. At a length of 20 meters, the rope bridge which connects the mainland to Carrickarede island was thought to be built by salmon fishermen. For a fee, one can cross the 30-meter-high bridge.

The Trift Bridge is a 170-meter-long and 100-meter-high bridge in the Swiss Alps of Switzerland. In order to get to the bridge which crosses Lake Triftsee, visitors must take a cable car, followed by a gondola and finally a 1.5-hour uphill hike. Over 20,000 guests make the trip every year to see the beautiful Trift Glacier.

The Kakum National Park, which was established in 1931, is one of the most visited tourist attractions in Ghana, and for a good reason. It’s canopy walkway which was built by Canadian engineers, consists of 7 bridges over 330 meters in length and approximately 40 meters high. The slender one-person walkway has a protective mesh to prevent people from plunging to their deaths.

The Capilano Suspension Bridge is a 140-meter-long bridge named after the river 70 meters below – the Capilano River. Located in British Columbia, Canada, the bridge was built in 1889 with hemp rope which was later replaced with cable bridge. Over the last 20 years, there have been a few reported incidents of people falling off the bridge to their deaths.

Q’ueshuachaca sometimes called Keshwa Chaca, or the Inca Rope Bridge is a 30-meter-long bridge hanging across the Apurimac River in Peru. Unlike other bridges, this one was constructed using rope, vines, and twigs, which adds to its durability. Every year in the month of June, locals in the area renew the bridge as part of an ancient tradition.

Located in the Gilgit-Baltistan region of Pakistan, and crossing over the Borit Lake is 129-meter-long known as the Hussaini Hanging Bridge. The bridge although poorly maintained was made using steel cable and wooden planks, and it saves villages a 2-hour trek through mountainous terrain. Named after a holy man and the locals believe that nothing bad can happen to them when they are crossing.

The Salbit Suspension Bridge is a 90-meter-long bridge found at the Salbitbrüche Hiking Trail in Switzerland. The bridge which hangs over 2300 meters above the ground is not for the faint heart. There is a demanding hike in order to get to the trail, but once you get there, you will see amazing views of the glaciers of Sustenhorn.

The Musou Tsuribashi Bridge was built sometime during the 1950s, and it can be found in the Akaishi mountains of Japan. Crossing the bridge made of wooden boards, wires, vines, and ropes have been said to be a terrible experience by many of the people who cross it.

The Tsingy de Bemaraha bridge is located in the mineral forest of the Tsingy de Bemaraha National Park in Madagascar. Apart from the fantastic views, people go there to cross the “dizzy bridges,” so named because looking down causes vertigo in many of the people who do so.