11 Most Dangerous Roads in the US 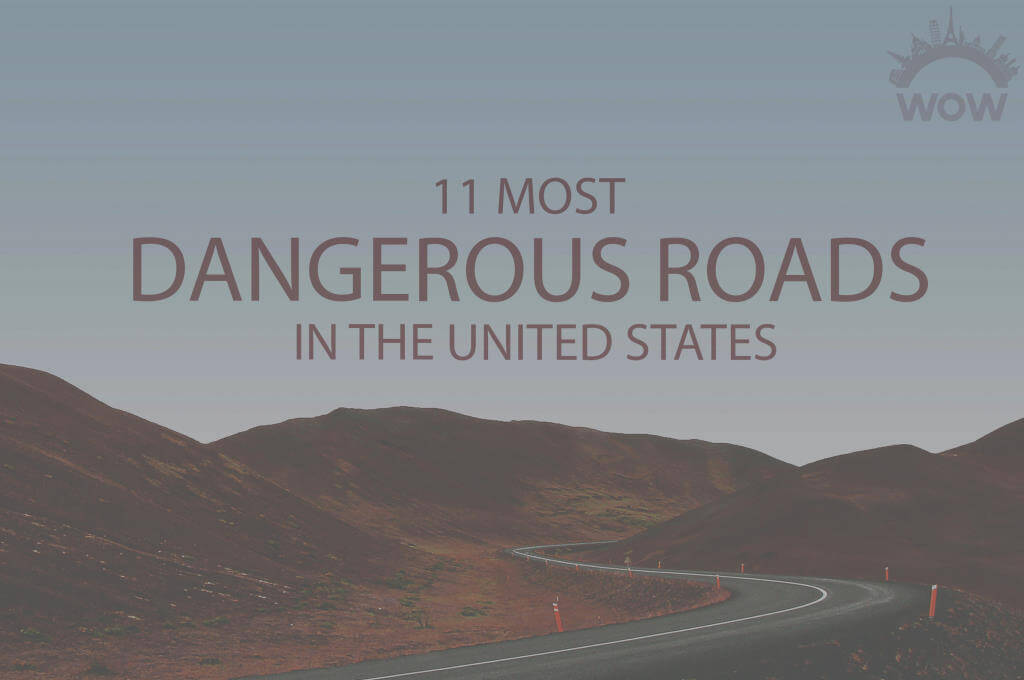 Although unchanging and consistent open roads can be very relaxing to drive on, others require a bit more concentration and attention. While there are thrilling yet terrifying roads all over the world, there are lots of roads that offer adventure right in the United States. Now, the most dangerous road in the US, which ranges from Maui to Colorado, might not be as extreme as Bolivia’s “death road.” However, when it comes to highway deaths per capita, the US is much more dangerous than most northern European countries. In fact, that number is 11 highway deaths per 100,000 population annually. That’s almost three times the death rate of the United Kingdom! The deadliest stretches of roads might be very scenic and picturesque, but you need to be careful out there. To that end, here are the 11 most dangerous roads in the US.

Highway 17 in South Carolina is easily the most dangerous road in the US. The magnificent and stunning scenery, which features thick canopies of trees in some stretches, is very deceiving. That’s because the highway becomes especially dangerous in South Carolina, where it has a host of blind and sharp curves. What’s more, many wildlife, such as mountain lions and deer, tend to suddenly jump right out of the canopy and in front of cars. The sharp turns, blind curves, and narrow lanes have resulted in death every two miles.

Did you know that Highway 17 passes through the charming coastal city of Myrtle Beach? If you’re making a long road trip, then you might want to consider staying at the Best Hotels in Myrtle Beach.

The 25-mile stretch (40 km) of Highway 550 in the southwestern part of the state is one dangerous road in Colorado. Known unofficially as the “Million-Dollar Highway,” the highway connects some of the Best Places To Visit In Colorado. For instance, it connects the antique tourist towns of Silverton and Ouray, one of the Best US Winter Vacation spots. Then, it reaches elevations of 11,000 feet as it passes through the San Juan Mountains’ Red Mountain Pass. However, the scariest part of this highway is that it doesn’t have guardrails since they impede removing avalanche and snow debris. What’s more, there aren’t any shoulders on a greater part of this section too. So, weaving off the road translates to plunging thousands of feet along the side of the mountain.

There are conflicting stories about the origin of the nickname “Million Dollar Highway.” The most popular one is that it’s the cost of paving or building the road. It includes the amount of silver and gold excavated when the highway was built in 1926. Yet another local folklore says that the name came about because an early traveler said she’d have to be paid a million dollars to drive it again!

The James Dalton Highway is not only the most dangerous road in the US but one of the World’s Most Dangerous Roads! To add to the danger, it traverses an eerie distance of 666 km (414 mi)! Considered one of the world’s most isolated routes, the highest extends from Elliott Highway to Deadhorse near the Arctic Ocean. Since it supports the Trans-Alaska Pipeline System, the road is mainly used by truck drivers for making it from and to the northern Prudhoe Bay Oil Fields. However, harsh weather, rugged terrain, and next-to-nothing visibility make this road very treacherous. Furthermore, huge portions of the road aren’t paved either, so it becomes very icy and slippery mid-winter. The worst part is that the surrounding tundra also sees lots of avalanches, adding to the danger.

The highway is so isolated that there are just three towns that lie along the route. Moreover, there are no gas stations, restaurants, or even medical facilities. That’s why truckers and drivers are advised to bring lots of safety and survival gear as well as supplies. It’s no surprise that the James Dalton Highway has featured on “World’s Most Dangerous Roads” on the BBC channel.

The Road to Hana is one of the most popular and scenic drives in Maui, Hawaii. Part of Routes 36 and 360, the 64-mile-long (103 km) Hana Highway is also infamous for a significant number of accidents. Connecting Kahului and Hana, the highway is wider than the other dangerous road in Maui, Kahekili Highway. But, it has many one-way bridges, along with curves and hairpin turns. Thus, it can be very difficult to navigate, especially since the road is very popular and filled with tourist drivers. What’s more, there are many places with vegetation and a wall of rocks on one side and steep cliffs (sans guardrails) on the other. To that end, only experienced and calm drivers should be heading along this road – and that too only during the day.

The I-285 around Atlanta, known as the Perimeter, is the most dangerous road in the US. The highway circles the city in one huge 63-mile (101 km) loop, thus connecting many highways and interstates running into the city. In fact, it crosses with the I-85 just northeast of the city, making for one of the World’s Most Confusing Interchanges. So, I-285 is full of merging, turns, and large trucks and tractor-trailers, which means that it’s extremely dangerous. In fact, the highway had fatality numbers of 3.5 fatal crashes every 10 miles in 2013! The heavy traffic only adds to the danger, so drivers need to be very safe while navigating this highway.

What doesn’t help is that Atlanta is said to be one of the Most Dangerous Cities In The United States!

Highway 160 is easily the most dangerous road in Colorado. Located in the San Juan Mountains, the highway leads to Wolf’s Creek Pass, which sits at an elevation of 10,850 feet! There’s a particularly steep section that’s full of tight switches and hairpin turns that’s very difficult to navigate. Add to that a propensity for nasty weather, and this highway is very, very dangerous. During winters, the ice and snow make it all the more difficult to navigate. Even summers see a lot of snow here, which is why most over-the-road truck drivers avoid Colorado in entirety during the winter months. That’s why one of the most famous pieces of advice of the state’s transportation department is “Beware of the Wolf!”

There’s no doubt that Kahekili Highway is the most dangerous road in the US. Also known as State Highway 340, it also happens to be one of the most dangerous roads in Maui. For about 20 miles (32 km) between Wailuku and Kapalua, you need to navigate rocks on one side and steep cliffs on the other. The road might allow for two-way traffic and be paved reasonably well, but most of it is a single-lane one. Plus, it has pull-offs in certain areas to allow vehicles to pass each other. Now, that can be a dangerous prospect, especially if some over-enthusiastic driver is coming over at high speed. That’s why most of the trip needs to be done at a lower speed while navigating winding turns without guardrails.

In fact, it’s not uncommon for the road to be closed when debris or an accident blocks the highway. The fact that many motorists have been killed with their bikes falling off the side makes it all the more unsafe.

The I-10 runs the entire width of the country, and it even connects some of the Top Things To Do In Arizona. However, the 150-mile (241 km) stretch between Phoenix to the California border is especially dangerous. In fact, 85 deaths were reported in this stretch of the road in a single year in 2010. The section runs through a lightly populated desert and sees a lot of traffic. But, factors such as lack of sleep and tiredness have sent many drivers either straight into oncoming traffic or the desert. The mountainous terrain and hairpin curves only add to the dangerous nature of the road, which requires a lot of attention for driving on.

Highway 2 in Montana is the most dangerous road in the US, with the highest fatalities. The highway crosses through the northern, and thus, the remotest part of the state, with very few towns in between. That’s one of the reasons why Montana is known as one of the most dangerous states for driving overall. In fact, some national transportation agencies have asserted and found that rural roads are more dangerous than urban ones. The reasons include long transportation times, almost 80 minutes, for ambulances to get accident victims to hospitals. Furthermore, the sparse traffic only translates to faster driving, thus resulting in more accidents where drivers lose control of the vehicle.

Millions of people drive back and forth annually from Los Angeles in Southern California to Las ‘Sin City’ Vegas in southern Nevada. However, this 180-mile (290 km) stretch has seen more fatalities than anywhere else in both states. The kicker? Half of those killed are usually not wearing seatbelts, zipping down the highway. However, commercial truck drivers and AAA who drive the route say that there are other reasons too. These include distracted driving due to the scenery as well as drinking and driving. In fact, in the 15 years before 2010, 1,069 people had been killed on the road.

In 2017, one of the World’s Most Scenic Drives was also ranked the most dangerous road in the US – that’s Florida’s Highway 1. The road has the highest fatal crash rates, with 1,079 people having died on the road in the previous decade alone. The highway, the longest north-south one in the country, runs along Florida’s east coast for about 545 miles (877 km) through 13 counties. During the summer months, when the traffic skyrockets, so do the fatalities. This highway runs through some major Floridian cities, including Key West, Miami, Fort Lauderdale, and Jacksonville.