11 Most Dangerous Caves in the World 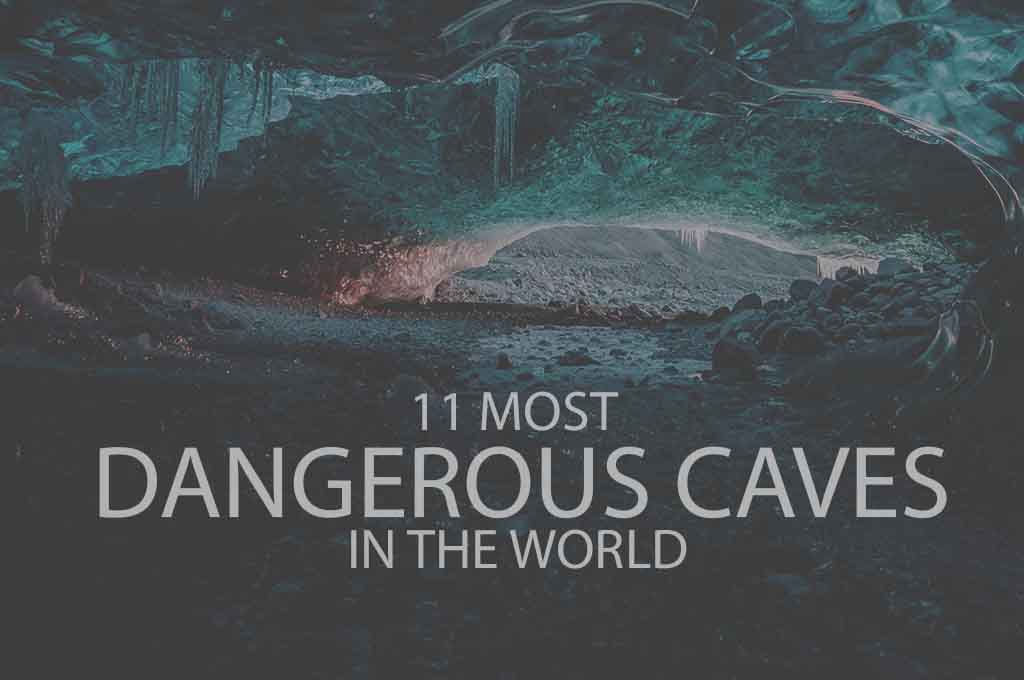 Caves have always held a special place in humanity’s imagination throughout history. They might as well be portals to secret worlds filled with the unknown. It’s no surprise that caves have been central fixtures in some of history’s most renowned literature, from the Mines of Moria in Lord of the Rings to Cyclops Polyphemus in Homer’s “Odyssey.” Clearly, even the most dangerous cave in the world, and there are many like that to explore, is not enough to put off explorers. That’s because they believe that these hidden worlds are meaningful to humanity at the very core.

Also remarkable is that new caves are being perennially discovered, making spelunking one of the last bastions of exploration. And no matter how dangerous they are, these caves continue to attract spellbound visitors and explorers. So, what are you waiting for? Strap on your headlamp and Wellington boots and head out to explore 11 of the most dangerous caves in the world.

The natural sinkhole of Shaft in Mount Gambier in South Australia might be the most dangerous cave in the world. This incredible cave appears as a small hole in a grassy field, which makes it extremely dangerous as it is. However, those unlucky enough to fall within will find themselves deep underground in a submerged cave system with no natural light. What’s more, the shaft entrance is so narrow that the diver needs to take off their diving equipment to enter. Only after that can the equipment be lowered down! If all that wasn’t enough, there are hundreds of twisted passageways that divers need to navigate using just their lights.

Furthermore, divers need to consume very low air during the dive, or they won’t have enough to get back to the surface. Unfortunately, that’s one of the main reasons why many divers have lost their lives in this cramped and dangerous cave system. In fact, it’s the site of the 1973 Mount Gambier cave diving accident, which claimed the lives of four recreational scuba divers.

If something is called the “Temple of Doom,” it’s bound to be dangerous, isn’t it? Behold Cenote Esqueleto in Cancun, Mexico, which is one of the most dangerous caves in the world to explore. The massive underwater cave complex has featured in many documentaries and films. What’s more, it’s dangerous right from the outset; you must make a massive 30-foot jump into the waters to get into the cave! Furthermore, the huge cave goes on and on under the ground, with no natural light, making it extremely dangerous. That’s why divers are advised to stick to sunlit areas once they’ve jumped in, as it can get extremely dark in places.

Moreover, the combination of the intricate tunnels and the dark passageways is what causes divers to become disorientated and get lost. In fact, getting lost is the chief reason for many of the deaths at this dive site, an average of three people every year. Hence, most divers are content to hang around the sunlit areas.

Another cenote in Tulum, Mexico, the Taak Bi Ha Cenote, is considered one of the most silent places on Earth. Only the bravest can venture out here, for sure.

What makes the Wind Cave in South Dakota the most dangerous cave in the world is that it’s also one of the world’s biggest caves! This dense maze of a cave is also the world’s very first cave to be made into a national park. However, don’t be fooled by the titles and pretty pictures; this maze cave has a convoluted warren of underground passages. It’s also the world’s densest cave, possessing the largest channel volume per cubic mile. Furthermore, it’s very, very windy due to the presence of very few entrances.

So, air constantly flows in and out of the cave to equalize the atmospheric pressure outside and inside. Thus, it results in a strong wind flow all the time, which is the cave “breathing” phenomenon. In fact, people get lost here so frequently that the US National Park Service even has a special team of spelunkers that are ready to rescue lost explorers on the trot.

Krubera Cave in the Caucasus Mountains in Georgia is one of the most dangerous caves in the world to explore. This cave, which lies in the region of Abkhazia, has seen divers and spelunkers explore up to a depth of as much as 1.3 mi (2,091 meters). Still, they haven’t found the other end of it! What’s more, the cave also travels for as long as 10 miles under the mountains. The dizzying array of winding shafts and side tunnels is enough to get any foolhardy and even experienced explorer lost. Plus, many of the branch tunnels are filled completely with water, thus necessitating only professional divers and spelunkers to attempt to explore this system.

Interestingly, Krubera is also famous as one of the oldest known caves in the world. It predates even the Jurassic period, and geologists believe that it was carved out due to prehistoric flooding.

In a remote corner of the Baiyun Tau mountains on the Uzbek-Afghan border sits the most dangerous cave in the world, the Dark Star Cave. This huge cave system sits in an isolated region in Uzbekistan and features everything from huge waterfalls to frozen lakes. Even getting to the base camp of this cave is a treacherous journey; it requires traveling via the Silk Road to Samarkand and an arduous two-day trek up a treacherous path. And that’s just to get to the base camp! From here, it’s a two-hour hike followed by a 100-meter-high rope climb to reach the jaws of Dark Star.

It’s no wonder that the cave has been called the “Underground Everest” by many, as the freezing interiors of the cave stretch on for miles. Until now, 8 expeditions have explored nearly 11 miles of passages in Dark Star, the deepest of which is around 3,000 feet below the surface of the earth.

While you can enter the cave, you must do it via a boat since the 15-mile (24 km) long river empties right out into the South China Sea. Since the waters of the ocean heavily influence the cave water, the calm waters could see crashing waves and rising tides just as easily!

The most dangerous cave in the world is probably what is also the world’s most dangerous dive site Blue Hole in the Gulf of Aqaba off the coast of Egypt. Not for nothing is this unbelievably stunning attraction called the “Diver’s Cemetery.” It’s famous for the “the arch,” a convoluted passageway to open waters lying around 56 meters below the surface of the earth. Now, did you know that the recommended depth for any scuba diver is a maximum of 30 meters? That’s what makes this “hole cave” so dangerous. If a diver gets that deep, nitrogen narcosis could alter their judgment, rendering them unable to make good and fast decisions.

What’s more, it could even cause disorientation and a loss of consciousness. The most dangerous point in the hole is the ‘arch,’ which opens up to an 85-feet-long reef tunnel that cuts into the open sea at 170 feet of depth. So, if divers miss the opening of the ‘arch’ due to nitrogen narcosis, it means that they’re descending to their deaths.

The Devil’s Caves system in Ginnie Springs, off the coast of Gainesville in Florida, is one of the most dangerous caves in the world to explore. The system has three separate springs, Little Devil, Devil’s Ear, and Devil’s Eye. Devil’s Ear is a canyon-like opening at the junction of the Sante Fe River and Devil Spring. Meanwhile, Devil’s Eye Spring is a cylindrical limestone shaft at the Devil Spring’s lower end. However, the most dived cave site on earth is Devil’s Spring, which is famous and popular with certified cave divers.

But, that doesn’t make them any less dangerous, as they all have unique challenges. Think tiny passageways and areas of shifting waters that act like currents and could damage diving equipment. Today, the caves have a strict “no-lights” rule, and only certified cave and cavern divers can enter the system while carrying lights. Did you also know that there are dive rules and a dive liability waiver form? Umm, yep.

There’s yet another Floridian cave on the list of the most dangerous caves in the world; this time, it’s the Eagle’s Nest Sinkhole. Many consider this Weeki Wachee dive site as the “Mount Everest” of cave diving, and it’s easy to see why. While the surface seems like an ordinary pond in the Chassahowitzka Wildlife Management Area, the sinkhole descends to almost 300 feet beneath the surface. In fact, the dive site is so deep and descends into a system of underwater passages that it’s difficult to navigate even for the most skilled divers.

The descent is terrifying enough; the path is via a “chimney” that opens up to a large cavern called the “Main Ballroom.” And even beyond that, many crannies and tunnels go even deeper. Since this diving site has seen many accidents and deaths, all divers need to complete an online registration process that includes a liability release form, and that too before every dive.

Tucked beneath the western Ural mountains is Orda Cave, one of the most dangerous caves in the world to explore. These caves near the Russian city of Perm are also one of the world’s longest underwater caves, stretching for more than three miles. A major portion of the cave is submerged in crystal-clear water due to the rich gypsum rock of the mountains. What’s more, the cave’s shafts and tunnels descend to nearly 100 feet below the surface, with water temperatures reaching well below freezing levels. Clearly, Orda is not for amateur divers. In addition to all of the above, Russian regulations require divers to use the specialized gear. The purpose of this gear is unique – to divert the bubbles away from the walls to protect the sensitive gypsum walls.

So, it’s no surprise that the cave’s otherworldly topography has given rise to legends, including that of a spirit called “The Lady of the Cave.” Basically, the spirit is said to take the form of a maiden in a white gown and guide and protect divers that venture into the cave. Unfortunately, this lady can’t protect everyone from the twisting passages, sharp walls, and cold water, making Orda one of the world’s dangerous cave dives.

Without a doubt, the Samaesan Hole in Thailand’s Samaesan Bay is the most dangerous cave in the world. Imagine diving deep into a cave with unexploded bombs! That’s because the hole is a former military dumping ground. Besides this, what makes the Samaesan Hole so dangerous is the fact that it penetrates 85 meters deep into the earth. To top that, the cave faces incredibly strong currents, which could take divers severely off course if they aren’t prepared. This deep dive site in the Gulf of Thailand plummets almost 280 feet, and sunlight rarely reaches the bottom. So, not only do divers require formal technical training, but they also need to be equipped with proper deep diving equipment.