The World’s 15 Most Amazing Stadiums 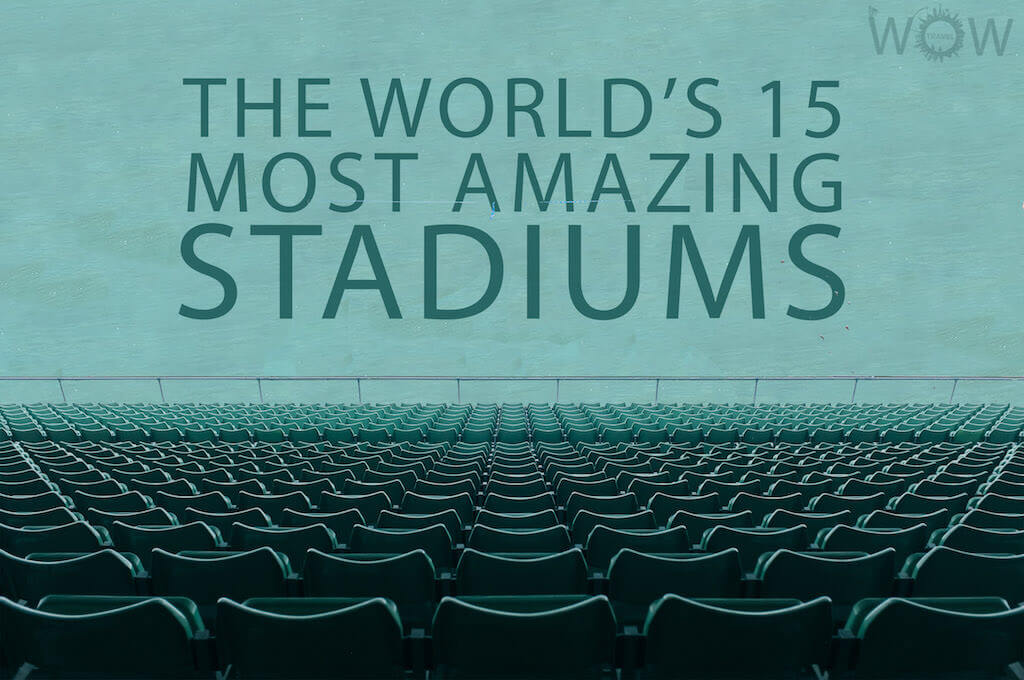 Stadiums are the synergy between engineering, art and entertainment. The need for better andm bigger stadiums has always resulted in some iconic infrastructures, several of which have become world famous landmarks. Check out the list below of the The World’s 15 Most Amazing Stadiums.

Borisov Arena is the home stadium of FC BATE Borisov and the Belarus national football team with a capacity of 13,126 seats. Designed by Slovenian company OFIS Arhitekti, the arena forms a unified rounded dome, giving the impression of a single enclosed object. The Skin of the dome gives an impression of a fragile stretched perforated textile pulled over the stadium skeleton.

Olympiastadion (Olympic Stadium) was constructed to host the Olympic Games of 1972. The roof is like an umbrella over landscaped grounds. It seems light, open and inviting. lt covers the sports areas and parts of the park in large sweeps. We recommend staying in one of the 11 Best Hotels In Munich, Germany near this stadium.

The Chinese National Stadium was the 2008 Olympic Games’ most striking structure, recognized all over the world. The circular shape of the stadium represents ‘heaven’ and the structural form of the stadium is popularly described as a ‘bird’s nest’, with its pattern inspired by Chinese-style ‘crazed pottery’.

With its open design the Kaohsiung Stadium was opened in 2009 for the World Games held in Taiwan. The stadium takes its name from Kaohsiung, a port city in southern Taiwan, 400 km (248 miles) south of Taipei, the capital city.

FNB Stadium in Johannesburg, South Africa, was built to host the 2010 FIFA World Cup. It was the first time the event had taken place in Africa.

Baku Crystal Hall was designed and completed in just eight months. It symbolizes the steady uprising of Azerbaijan and its capital city, Baku, which hosted the Eurovision Song Contest in 2012.

Oita Stadium is a beautifully curved stadium with a retractable roof in the city of Oita, Japan. Also known as “The Big Eye”, it is a world-class multi-purpose stadium, bursting with the shouts of 43,000 people.

The National Aquatics Center, also known as the ‘Water Cube’, was one of the most dramatic and exciting sporting venues constructed for the 2008 Beijing Olympic Games. Its distinctive appearance inspired by soap bubbles. Façade constructed from ETFE, which has 1% the weight of glass.

Allianz Arena (Bayern Munich Stadium) in Bavaria, Germany with a 69,901 seating capacity. Widely known for its exterior of inflated ETFE plastic panels, it is the first stadium in the world with a full color-changing color exterior.

Warsaw’s impressive National Stadium was built to be one of the venues for the 2012 UEFA European Championship and it represents the city’s move onto football’s world stage.

The 16,000 seat arena in Stockholm is shaped like a large white ball, it has a diameter of 110 meters (361 ft) and an inner height of 85 meters (279 ft) making it the world’s largest spherical construction.

The Float at Marina Bay, Singapore

The Float at Marina Bay is the world’s largest floating stage. Made entirely of steel, the floating platform can bear up to 1,070 tonnes. The gallery at the stadium has a seating capacity of 30,000 people.

Nouveau Stade de Bordeaux is the recently opened new stadium of Girondins de Bordeaux and one of the playing venues of the Euro 2016 Championships. It replaced Bordeaux’s old stadium Stade Chaban-Delmas.

The Arena das Dunas in Natal, Brazil, was built to serve as one of the venues for the 2014 FIFA World Cup. It replaced the old Machadão stadium, which got demolished in October 2011.

The Cape Town Stadium in Cape Town, South Africa, was built for the 2010 FIFA World Cup and can host up to 55,000 people.