Top 10 Things To Do In Bern 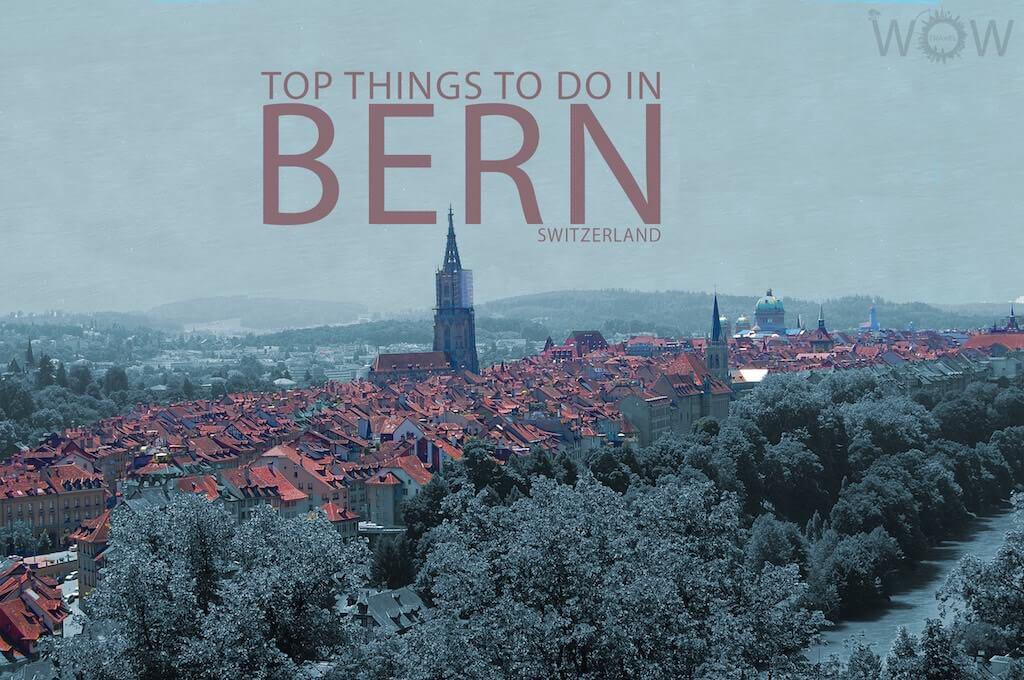 Bern is the capital of Switzerland, situated on verdant hills right by the glacial blue-green waters of the River Aare and it is the country’s fifth most populated city after Zurich, Geneva, Basel and Lausanne. Bern is the most preserved medieval city in the country, boasting over 5.2 square km (2 square miles) of towers, cathedrals, arcades and historical structures. Here is our list of the Top 10 Things To Do In Bern.

The Clock Tower (Zeitglockenturm) was Bern’s first western city gate (1191 – 1256) and formed the boundary of the first city extension. Today it is one of Bern’s most important sights. The ornate astronomical calendar clock was created in 1530 and it is still “performs” every hour, using all its original mechanical parts.

The Cathedral of Bern (Das Berner Münster) is the most impressive late-Gothic building in Bern and Switzerland’s largest Medival church. Construction started in 1421 and continued under a series of different builders for generations. Tourists can climb the tower’s 344 steps for a small fee and enjoy the magnificent view.

The Parliament Building is the seat of the Swiss Parliament and an outstanding symbol of politics in Switzerland. It was built between 1852-1902 by Hans Wilhelm Auer. Most fascinating feature is the super-splendid copper dome. Swiss Houses of Parliament also boast of a stained-glass dome which has been adorned with motifs of the city and a spectacular chandelier having more than 200 bulbs producing a hypnotic effect. Free guided tours are available when Parliament is not in session. Visitors will see the domed hall, both debating chambers (Council of States and National Council) and the lobby (‘Wandelhalle’).

Albert Einstein, the 20th century genius, the founder of the theory of relativity that radically changed our understanding of space and time, lived in Bern from 1903 to 1905 on the second floor of a building in the historic district of Bern. This small apartment is of enormous importance and a special attraction of Bern as it is where Einstein developed the theory of relativity in 1905.

Bern was named after a bear found in the forest. Today, the city still maintains a bear enclosure, where the city’s namesakes can roam (almost) freely right by the river with stunning views over the old town.

Dating from a variety of periods, include 15th-century arcades and 16th-century fountains, Bern’s old town is a charming place to wander around its medieval sandstone arcades and narrow streets. The old town is situated on a narrow hill surrounded on three sides by the waters of the Aare River. Most of the medieval town was restored in the 18th century but it has retained its original character. Trams run through regularly and the many fountains topped by statues depicting Biblical and other characters.

Rosengarten was previously a cemetery and has been converted into a park that contains formal and walled gardens (with 223 varieties of roses, together with 200 iris), ponds, fountains, lawns and a number of impressive sculptures. From the Rose Garden a scenic panoramic view of the medieval town center can be enjoyed.

A unique museum dedicated to the life and works of Paul Klee, one of the 20th century’s most important artists. Klee’s daughter-in-law offered to present the city of Bern with 690 paintings, on condition that it build a museum for approximately 4,000 works by the end of 2006.