Top 10 Things To Do In Dinant 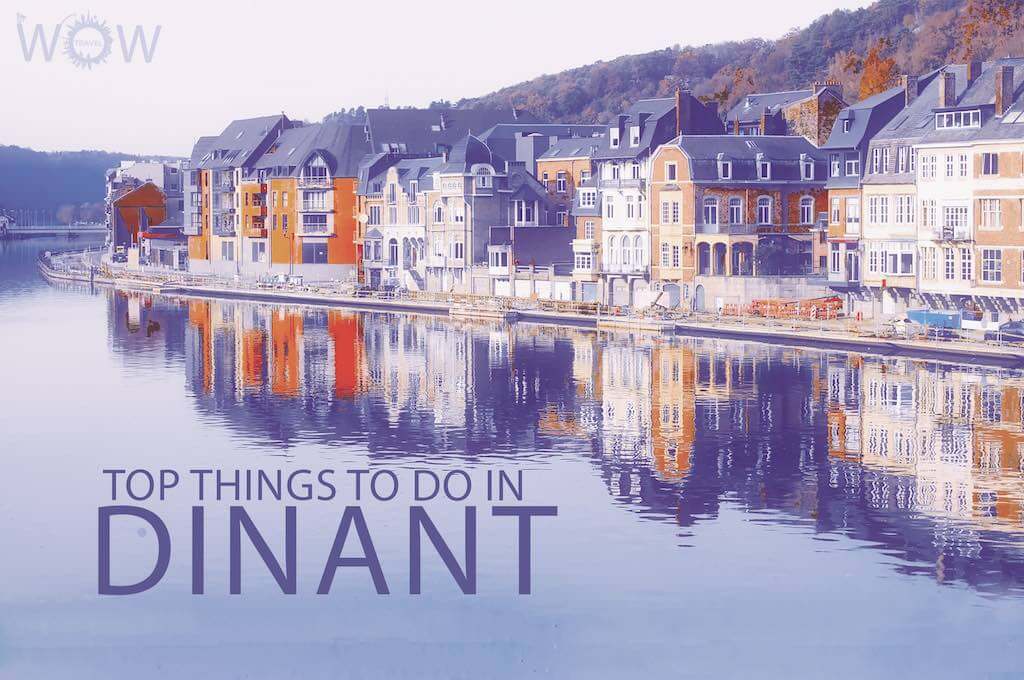 Situated in the province known as Namur in Belgium. Dinant is a small town with many hidden treasures. Just an hour’s drive from Brussels, the town is centered around the Meuse River. This picturesque Belgian gem is like stepping into the past. Dinant is one of the most beautiful towns in Belgium and has a fascinating history. It is best known for the Battle of Dinant and the Citadel Dinant. It is also the birthplace of Adolphe Sax, the inventor of the Saxophone. Below we have outlined the top 10 things to do in Dinant.
[booking_product_helper shortname=”dinant”]

La Citadelle de Dinant is the most popular spot in town. Standing on a cliff, providing a stunning view of the entire town and the Meuse River. The citadel’s original purpose was for defense. Since it was first built in 1040, the citadel has changed hands many times, from French to Dutch. The French made several changes to the fortress during their occupation of the town. Afterward, the Dutch made their own changes from 1818 to 1821, when the town was returned to Belgium. You can reach the citadel in different ways. The cable car is the most popular and scenic route, but if you like to walk, you can take the 408 steps to the very top. Once you’re there, you have an incredible view of the town and the river.

Originally a monastery, Maison Leffe is now a beer museum, restaurant, and bar. Here you will learn about zythology, the study of beer and beer making. The perfect chance to try out a variety of beers and learn the history of the abbey.

Collegiate Church Of Our Lady

This incredible church is known as the Collegiate Notre Dame de Dinant or Collegiate Church of our Lady. Built on the ruins of a 10th Century Romanesque church. The centerpiece of the church is the large church window. It was built in 1902. The work was inspired by the art of 13th Century stained glass windows. The 16th-century bell tower, shaped like a pear, is the symbol of Dinant.

The Home Of Adolphe Sax

Dinant is most famous as the home and place of birth of Adolphe Sax. In the 1840s, Adolphe Sax invented the saxophone. The family home has been transformed into the ‘Maison de Monsieur Sax’. A small museum, it is nonetheless an interesting and fascinating glimpse into a piece of musical history. The influence of his invention can be felt everywhere, you will find saxophones throughout the town as you walk through the streets.

This beautiful and heartfelt memorial is dedicated to those townspeople who lost their lives in World War I. Their names are inscribed on a metal plaque that faces the River.

Named after the late French President and leader of the French Resistance during World War II, the Charles de Gaulle bridge is well worth a visit. Leading to the Dinant Notre Dame and city center, you are provided with stunning views of both the River Meuse and its banks. There is also a connection to Adolphe Sax; the bridge is decorated with colorful saxophones.

Dinant is also known for its famous Couque Biscuit. Visiting the Couques Jacob, you will have the chance to try this cookie. Surprisingly though – a literal tough cookie! – it is made from wheat flour and honey. The best way to enjoy this cookie is to have it broken into pieces and enjoy with a coffee.

The best way to enjoy the views offered by the River Meuse, is to join the river cruise. The cruise lasts for one hour and gives you the chance to relax and take in all that Dinant has to offer, from its medieval architecture, saxophones, and natural rock formations.

For the adventurous, there is the Grotte la Merveilleuse. Situated close to the train station, it is a large underground cave. Exploring the cave you will find that it is filled with incredible formations of drapes, columns, and waterfalls. Make sure you’re wearing comfortable footwear as you are given a guided tour of this stunning natural space.

Renaissance Fortress – The Castle Of Freyr

Located on the left bank of the Meuse River, between Dinant and the settlement of Waulsort, this Royal Palace is a heritage site. Containing beautiful and labyrinthine gardens. The interior of the palace provides a snapshot into the history of Royalty, with its incredible architecture and original furniture.