Top 10 Things To Do In Kazakhstan 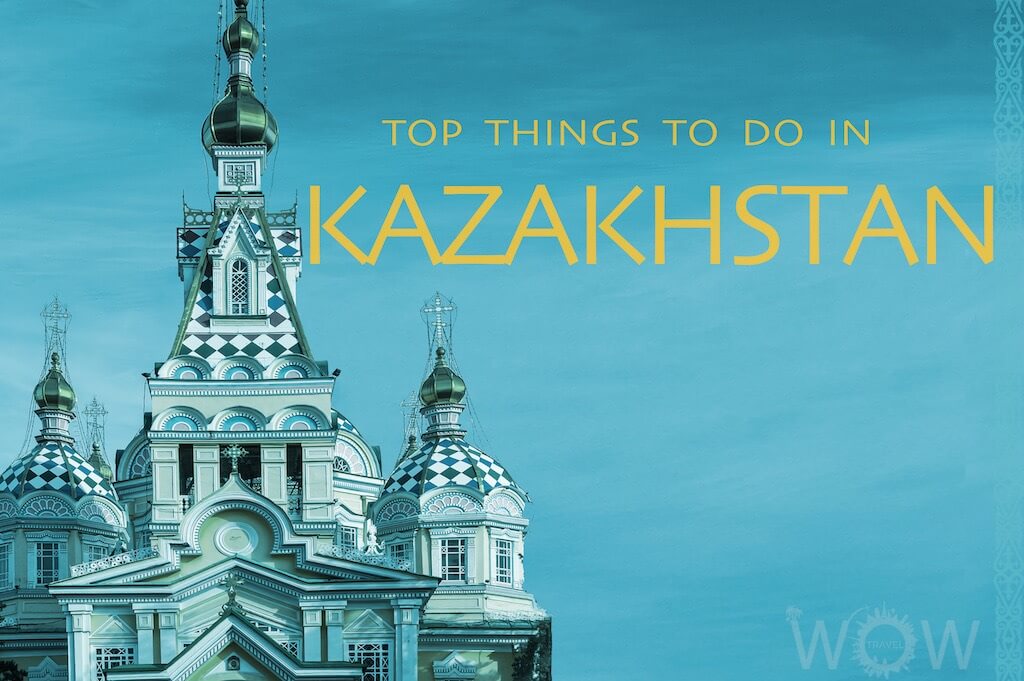 Kazakhstan is a vast country, the ninth-largest in the world as well as the world’s largest landlocked country, stretches from the deserts of Turkmenistan and Uzbekistan to Siberia, and from the Caspian Sea to China. Kazakhstan has a unique mix of deserts, steppes, savannas, wild forests, pristine lakes and rivers as well as modern cities, such as Almaty, a major commercial and cultural hub with leafy avenues, chic cafes, diverse dinning, stylish shopping centers and vibrant nightlife. Enjoy our Top 10 Things To Do In Kazakhstan.

Shymbulak Ski Resort is located 25 km (15.5 miles) from the city center of Almaty City, in the beautiful Zailiyskiy Alatau mountain at 2,260 meters (7414 ft) above sea level.It is an unknown area to most outsiders, but it is one of the best spots for snow-sports in all of Central Asia. Spanning over 920 meter (3000 ft) of vertical and nearly 12 km (7.5 miles) of ski runs. The air is crystal clear and it’s simply beautiful up there.

Zenkov Cathedral is located in Panfilov Park in Amati. It is one of the 8 most unique wooden buildings in the world and it was built without using any nails, which makes it pretty unique. After the revolution it was used as historical museum, and in 1990 again it was given a status of a Russian Orthodox cathedral. The uniqueness of the building expressed in the fact that it could withstand the strongest of earthquakes strikes: in 1910, when virtually all of Almaty was destroyed, but in the cathedral only dome cross bent.

Whilst you’re in the Almaty area it would be worth taking in the scenery of the Kolsai Lakes. The scenery is not too different from the lakes of Alaska, with snow-capped mountains reflecting in the clear blue water, contrasting with the bright green vegetation. Channel your inner Bear Grylls by following hiking trails and sleeping in yurts. Source: gapyear

Zelyony Bazaar, also known as the Green Market, is the main market in Almaty. Almaty’s prosperity and multi-ethnic heritage helps ensure a lively and cosmopolitan dining scene, and Almaty’s Green Bazaar is a great place to experience it. Spices, and a frenetic buzz, fill the air, while tempting pyramids of fruit and nuts from the country’s fertile plains provide the color. The horse-heavy meat hall may be a no-go zone for many, but the upstairs cafes should be visited. A serving of manti-steamed spicy minced lamb and dough served with butter and sour cream – may not be the dieter’s meal of choice, but it works well, particularly when washed down with a cup of koumiss, fermented mare’s milk, or, perhaps for the camel-lover, some shubat, the animal’s milk. Source: peregrineadventures

Bayterek is one of the most famous sites in Astana, the capital of Kazakhstan. The tower’s outer appearance goes back to ancient nomads. It represents the mythological tree of life where the magic bird of happiness Samruk has made its nest and laid its huge golden egg. The monument was built in 1997 as a symbol of transferring the capital from Almaty to Astana. You can take the elevator to the top and enjoy a beautiful observation.

Charyn Canyon, also known as the “little brother” of the Grand Canyon, is 161 km (100 mile) long gorge, famed for its Valley of Castles, where the pillars and rock formations are so impressive that they look man-made. The Charyn has some of the world’s finest rafting, mostly of the highest level of difficulty, which should only be attempted with professional equipment and accompany.

The Central Mosque is a truly magnificent building and the biggest mosque in Kazakhstan, accommodating up to 7000 worshippers. It was constructed in the Timurid style of architecture. The mosque looks ancient, with its Turkish calligraphy, domes and minarets, but was only completed in 1999. Though it was built on the site of an old mosque, which functioned here since 1890. Source: almaty-kazakhstan

Rising majestically from the Kazakhstan steppe, the Khan Shatyr Entertainment Centre in Astana is thought to be the world’s largest tent. The “tent” is made of a transparent material and suspended on a network of cables strung from a central spire 150 meters (492 ft) high. The structure has a 200 meter (656 ft) elliptical base enclosing an area larger than 10 football stadiums. It has an urban-scale internal park, shopping and entertainment venue with squares and cobbled streets, a boating river, shopping center, mini golf and indoor beach resort. The transparent material allows sunlight through which, in conjunction with air heating and cooling systems, maintains a comfortable internal temperature between 15–30 °C (59-86 F) while outside the temperature varies between -35 and 35 °C (-31 and 95 F) across the year. Source: amusingplanet

Bayanaul is one of Kazakhstan’s protected areas and the country’s first national park, located іn southeastern Pavlodar Province, 140 km (87 miles) frоm the industrially developed city оf Ekibastuz, оn the outskirts оf the Central Kazakh Uplands. There are more than 450 species of tree to be found in the park, including indigenous species such as Black Alder and Bayanaul Pine. In the meadows, strawberries grow in abundance when they’re in season, meanwhile the forests are full of mushrooms. What’s more, the park is inhabited by a myriad of birds and animals, delighting the visiting nature enthusiasts. With four lakes, watersports are popular, while geologists and climbers flock to Bayanaul National Park to gaze at its interesting rock formations. Source: remotelands

Taraz, formerly Auliye-Ata (until 1938) and Zhambyl (1938–1992), is wellknown as an ancient city which is more than 2000 years old in southern Kazakhstan. In the 11th and 12th centuries it was a wealthy Silk Road stop and capital of the Turkic Karakhanid state. Just outside modern-day Taraz (15-18 km away) are the Babaji-Khatun Mausoleum (10th-11th centuries) and Aisha-Bibi Mausoleum (11th-12th centuries), masterpieces of ancient architecture which are listed as world architectural treasures by UNESCO.