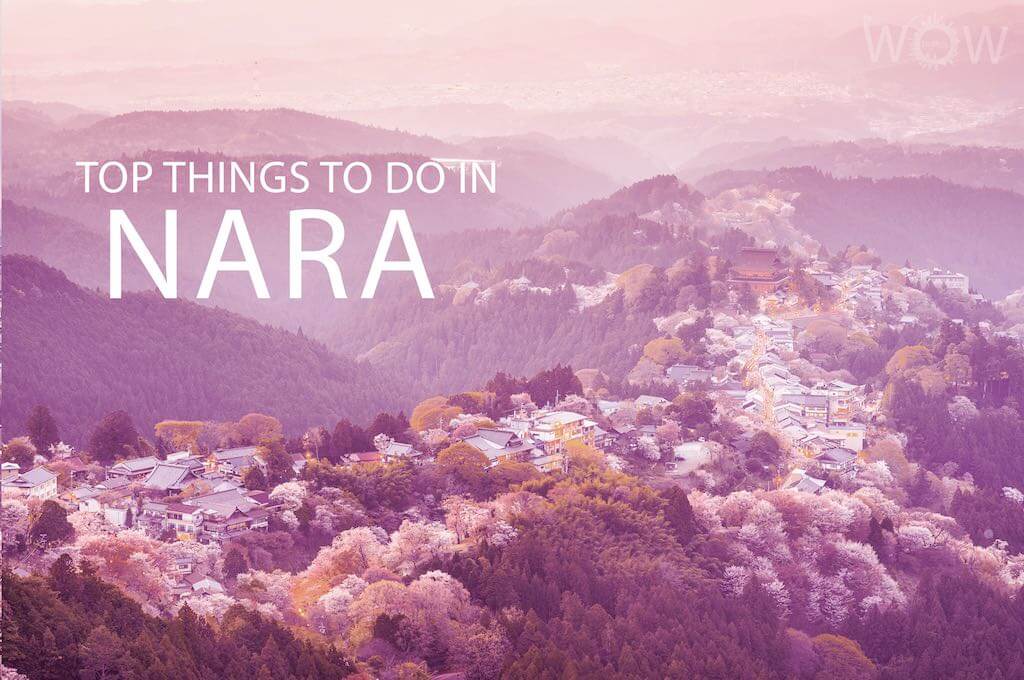 Established in 710 AD as the “Citadel of Peace” (Heijo-Kyo), Nara was Japan’s first permanent capital. It’s also the capital of the Nara Prefecture in Honshu’s Kansai region in central Japan. The city lies less than an hour’s drive from Osaka and Kyoto, and roughly 500 km (311 miles) southwest of Tokyo. There are plenty of things to do in Nara for everyone, from visiting some of Japan’s oldest temples and shrines to hand-feeding deer to participating in spectacular festivals. And when it comes to accommodations, you can choose from traditional ryokan (Japanese inns) and modern hotels in Nara.

A half-hour drive from central Nara will bring you to Horyu-ji, a temple complex that Prince Shotoku established in 607. Why is a visit here among the top things to do in Nara? For one thing, it’s home to the oldest surviving wooden structures in the world: a 5-story pagoda, the main hall (Kondo), and the central gate (Chumon). For another thing, Horyu-ji is also where you’ll find some of the oldest statues of Buddha in Japan; these date from the Asuka Period (538-710 AD). Other notable attractions here are the Hall of Visions (Yumenodo)—dedicated to Prince Shotoku—and the Gallery of Temple Treasures, which showcases beautiful Buddhist artwork.

Nara Park was established in 1880, making it among Japan’s oldest parks. It spans more than 600 hectares (1,483 acres)at the foot of Mount Wakakusa and is home to top attractions such as Todai-ji Temple, Kofoku-ji Temple, and the National Treasure Museum. However, there’s little doubt that the sika deer—more than 1,000 of them—are the park’s main draw. Once enjoying divine status, the deer are now considered national treasures. Feeding the deer with “deer-crackers” (Shika-senbei) is among the most popular things to do at Nara with kids. However, it’s important to keep a few simple rules in mind to ensure a safe and enjoyable experience. First, don’t tease the deer or refuse them a treat as this can confuse or anger them. Second, keep watch over your belongings; deer looking for food have been known to dig through purses and bags.

Though the structure we see now is a reconstruction of the original Heijo Palace, visiting this UNESCO World Heritage Site is still among the top things to do in Nara. The palace served as the residence of the emperor during most of the 8th century as well as the site of government offices. After the transfer of Japan’s capital from Nara to Heian, most of the palace structures fell into neglect and eventually disappeared. Today, visitors flock to the site’s many attractions including the Suzaku Gate, the Heijo Palace Site Museum, and the Excavation Site Exhibition Hall. For easy access to Heijo Palace, you can stay at the nearby Nara Royal Hotel, one of the premium 4-star hotels in Nara where you can enjoy a natural hot spring bath.

There are many places in Nara where time seems to have stood still. Naramachi is an example of such a place. This former merchant district, just east of Nara Park, features well-preserved traditional buildings, some of which are open to the public as museums. Several of these structures are machiya (townhouses), dating back to the Edo Period and even earlier, which functioned both as shops and merchants’ living quarters. See these and more by joining the Essence of Nara Cultural Tour, which includes Naramachi among its highlights. Visiting Naramachi attractions such as the Gangoji Temple and the Nara Craft Museum is one of the interesting things to do in Nara.

Mini-waterfalls, tranquil ponds, and lush greenery are some of the elements that make Isui-en among the most-visited destinations in Nara. Its name translates to “garden established on water,” reflecting the fact that the waters of nearby Yoshikigawa River feed the garden’s ponds. The front garden dates back to the 17th century (Edo Period) while the front garden was completed in 1899 (Meiji Period). Beside the garden is the Neiraku Museum, which showcases traditional Chinese, Japanese, and Korean ceramics. Visiting the garden is one of the popular attractions in Nara, particularly in the spring and autumn, when it’s at its most colorful.

This magnificent temple complex, built in 752, is famous for many reasons. First, it functioned as the head temple of all the provincial temples in Japan, wielding much political and religious power in the country. Second, its main hall was once the largest wooden building in the world. Third, this is where you’ll find the Daibutsu, one of the largest bronze Buddha statues in Japan. Finally, it’s the site of the annual Omizutori Festival, a dramatic event that combines purifying flames with sacred water. Taking part in this festival is among the liveliest things to do in Nara. Would you like a bird’s-eye view of the temple? If you’re staying in Osaka, you can book the hour-long Nara Iseshima Flight Tour and see Todai-ji and other landmarks from above.

Also called Mount Kasuga Primeval Forest, this is a UNESCO World Heritage Site that’s rich in history and ecological diversity. It sits behind the Kasugataisha Shrine, which has been protecting it since 841. For many centuries, cutting down any of the forest’s trees was a crime punishable by death. As a result, those who hike its trails today do so under maples, cedars, and other trees that are hundreds of years old. Also within the forest are caves, waterfalls, and Jizo statues. Discovering its hidden gems is one of the popular things to do in Nara. And if spending the night here sounds appealing, we recommend staying at the Tsukihitei. This luxurious 4-star Nara hotel, located inside the Kasugayama Primeval Forest, offers breezy rooms with relaxing forest views.

Visiting UNESCO World Heritage Sites such as this ancient Buddhist temple ranks among the top things to do in Nara, and for good reason. Built by Emperor Tenmu, it’s named after Yakushi Nyorai (Medicine Buddha), which arrived from China in 680. In the main hall is an impressive piece of Japanese Buddhist art called the Yakushi triad. This is a sculpture group composed of statues of Buddha, Nikko, and Gakko. Meanwhile, the Genjo-sanzoin Garan complex, completed in 1991, commemorates the monk Genjo-sanzo. Some of his remains are enshrined in the central octagonal hall. Of all the buildings in the Yakushi-ji Temple complex, the 3-story East Pagoda is the only remaining structure from the 8th century.

Approximately 53 km (33 miles) from central Nara, Mount Yoshino (Yoshinoyama) enjoys renown as Japan’s most famous cherry blossom spot. Legend has it that the first cherry trees were planted here more than 1,300 years ago. True or not, what’s known for sure is that today there are more than 30,000 cherry trees of different varieties covering its slopes. Yoshinoyama is a cultural UNESCO World Heritage Site and is one of the “Sacred Sites and Pilgrimage Routes in the Kii Mountain Range.” Strolling along the paths up the mountain in March and April, when the sakura are in bloom, is surely one of the most beautiful things to do in Nara.

Another popular spot for cherry blossom-viewing in springtime is this hilltop castle, located roughly a 15-minute ride southwest of central Nara. Constructed by the daimyo (feudal lord) Junkei Tsutsui in 1580, the castle passed through the hands of several prominent samurai clans during the Edo Period. Much of the castle saw destruction during the Meiji Period, though some of the inner and outer trenches remain intact. Today, visitors can see the stupa—Junkei Tsutsui’s final resting place—and look for the Jizo statue hidden in the castle wall. Visiting during the annual Oshiro Festival is one of the memorable things to do at Nara. It’s particularly attractive at night when the castle, trees, and ponds glitter with hundreds of lights.