Top 12 Things To Do In Astana 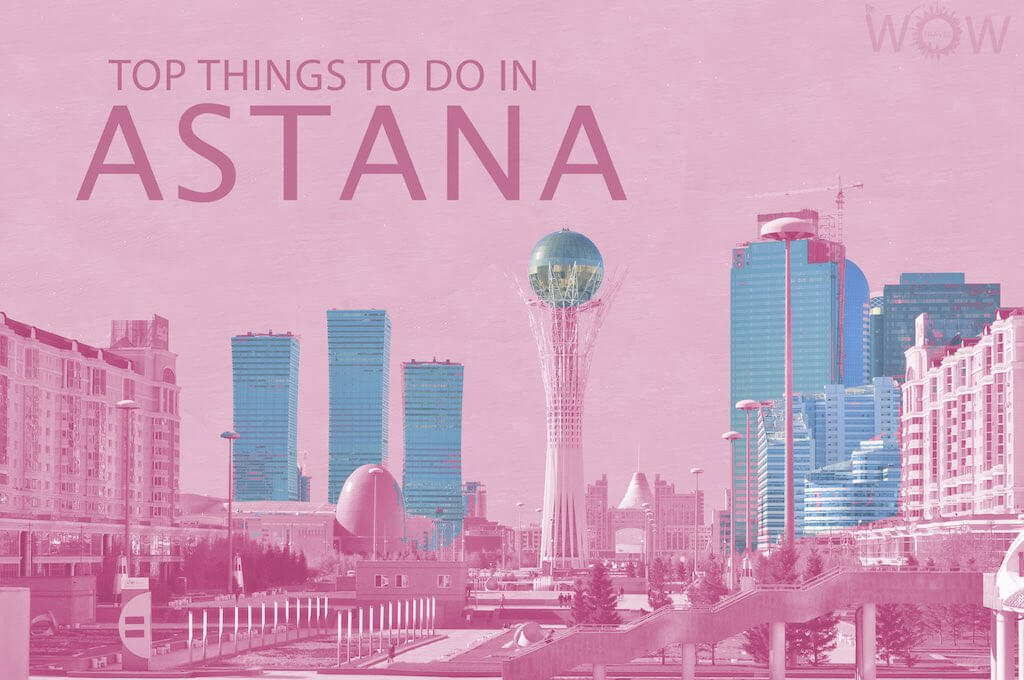 Astana, the capital city of Kazakhstan, spans the banks of the Ishim River in the north of the country. The city became the capital of Kazakhstan in 1997 and has since metamorphosed into one of the most modernized cities in Central Asia with many futuristic buildings. The well-planned capital city which was designed by Japanese architect Kisho Kurokawa was renamed Nur-Sultan on 23rd March 2019, in honor of the former president Nursultan Nazarbayev. There is much to marvel at in this new age city of the steppes. Whether it is the glass pyramid of peace, the giant tent shopping mall or a circus that looks like a UFO, the skyline of the city never ceases to amaze.

Baiterek is a monument and observation tower in Astana standing tall at 97 meters. The Kazakh word “Bayterek” translates to “tall poplar.” The tower is associated with a Kazakh legend about a mythical bird Samruk which is said to lay a golden egg containing the secrets of happiness and human desires in a tall poplar tree, which humans cannot reach. Visitors can travel to the top of the inside of the egg to marvel at the expansive views of the city.

Palace of Peace and Reconciliation

The Palace of Peace and Reconciliation also translated as the Pyramid of Peace and Accord is a 77-meter-high (253 ft) structure that was built in 2006 to house the Congress of Leaders of World and Traditional Religions. A 1500-seat opera hall, the Museum of National History, Library of Spiritual Religious Literature, and exhibition rooms are some of the interesting features of the pyramid. The apex conference room has windows that are embellished by stained-glass doves. A guided tour of the vicinity will give you a deeper understanding of the symbolism of the structure.

The Aquarium located at the entertainment center at Duman is extremely popular with locals and visitors to the city. It boasts of being the only aquarium that is located almost 3000 km away from the ocean and is, therefore, a big novelty for people who have never been near the sea. There are more than 3000 creatures from the oceans of the world and a 70m shark tunnel at the aquarium. Apart from the transparent shark tunnel, the other attraction at the aquarium is the shark feeding show wherein divers plunge into the water to feed the sharks.

One of the most extraordinary buildings in Astana is the 150m-tall Khan Shatyr. The translucent tent-like structure built in a neo-futurist style is a hub of activity. It prides itself on being a ‘lifestyle center with world-class shopping.’ The best thing about the structure is that the heat-absorbing material that it is made from maintains the summer like the temperature inside even when the mercury plunges to -30 degrees Celsius outside.

National Museum of the Republic of Kazakhstan

The National Museum of the Republic of Kazakhstan was opened on July 2, 2014, in a 74,000 square meter building. This enormous blue-glass-and-white-marble museum covers the past and ethos of Kazakhstan from olden to modern times. The themed halls of the museum include interactive displays and exhibits. The highlight of the visit to the museum is the Golden Hall, which has several thousand Bronze Age ornaments on display. Visitors are welcomed into the grandiose entry hall by a colossal golden eagle soaring over a massive map of the country.

Nurzhol Boulevard which is a pedestrian-only area is another iconic symbol of Astana. Located on the left bank of the Ishim River, the boulevard extends from the President’s residence to the Khan Shatyr Entertainment Center. The Nurzhol Boulevard connects all the main attractions and the most interesting sights of Astana. The iconic buildings and sculptures along the boulevard attract visitors from all over.

If you’re in Astana for a few days then one of those days should definitely include a day trip to Lake Borovoe located in the Burabay National Park north of the city. The breathtaking scenery along the way to the National Park will leave you quite amazed, given that Astana is quite flat and barren. The name of the lake Borovoe originates from the word ‘bor,’ meaning pine forest. Pine trees grow in abundance on the shores of the beautiful lake. You can take a dip in the waters of the lake or have a leisurely boat ride on the lake. There are plenty of hotels and restaurants in the vicinity.

The mosque which literally translates as ‘Holy Sultan’ is the largest mosque in Central Asia and regularly has up to 10,000 worshippers. The towering white turrets of the mosque are visible from many parts of the city. Opened to the public on July 6, 2012, the mosque has the largest dome in Kazakhstan at a height of 51 meters and a diameter of 28.1 meters at the base. The beautifully marbled interiors and the tiled dome are worth a visit.

The Metropolitan Circus building is another example of the quirky architecture of the city. It sits like a lost spaceship in the middle of a park, with an interesting fountain right in front of it. The Fountain Circus in front of this rather quirky building is fittingly filled with circus characters sculpted in their characteristic performances. The Metropolitan circus which can seat about 2,000 has inexpensive entertainment for people of all ages. The highlights of the circus are performances by touring circuses from different parts of the world.

The newly created opera house is a wonderful classic building with lovely acoustics, a grand main hall, sweeping staircases and lovely comfortable seating, giving a clear view of the stage. There are two halls in the opera house; The Main hall for opera and ballet performances which can seat 1250 people and the smaller Chamber Hall for chamber music concerts. The repertoire of the Opera House includes works of renowned composers from the region along with renowned Kazakhstani artists.

The popular football stadium holds 30,000 and has a retractable roof. Built between 2006 and 2009, the Astana Arena which serves as the national stadium for Kazakhstan’s national football team is the second largest in the country. It is well worth a visit if you are a football fan.