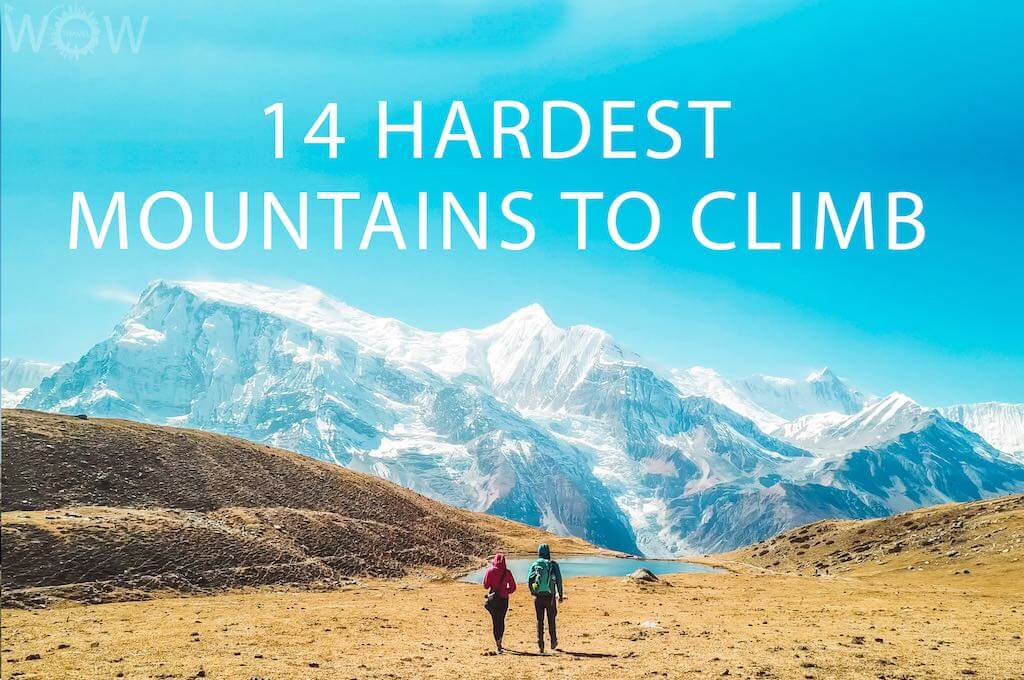 A euphoric experience awaits those brave enough to reach the top mountain peaks. Even more so, if you are to conquer some of the world’s hardest mountains to climb in the world. It’s no joke though because even seasoned hikers find these difficult due to unforgiving weather conditions, objective hazards, and potential altitude sickness, among many others. It’s a common thought that the tallest mountain is the most dangerous mountain to climb. However, don’t let the height fool you! Let’s break down the facts about the 14 hardest mountains to climb in the world. What makes them challenging, and how you can prepare for your exceptional journey?

Along the border of Patagonian Chile and Argentina in South America, Fitz Roy mountain is known for its notoriously steep slopes. After traversing the challenging terrain, hikers are bound to enjoy the incredible views, making the climb worth it. Be prepared by bringing hiking sticks, water, and some food because the route takes around 7-9 hours to complete.

Although its elevation is not amongst the eight-thousanders, Mt. Fitz Roy deserves to be one of the hardest mountains to climb in the world due to the dangerously strong winds – sometimes, hikers have to get on their knees to not get blown off!

In the west of Annapurna, inarguably one of the hardest mountains to climb in the world stands Dhaulagiri. It continues to entice elite climbers in spite of the high fatality rate – 73 climbers reportedly died trying to reach the summit. This majestic mountain is prone to avalanches and bad weather. Also, Dhaulagiri is the 7th tallest mountain in the world so hikers may experience altitude sickness. Remember to come equipped – know your gear and be wary of potential oxygen problems.

Mont Blanc seems to be a suitable name for this snow-covered mountain. It’s only 4,808 meters above sea level yet attained the highest fatality rate in all of Europe. This is undoubtedly the continent’s hardest mountain to climb. Be prepared since avalanches are common happenings and experiencing high-altitude sickness is possible especially if you are to stay there too long. Don’t be surprised to find a lot of tourists and locals flocking Mont Blanc in the Alps in good weather. It’s one of the most famous mountains in the region. Besides hiking, visitors of this beloved mountain go for skiing as well.

If you are a truly devoted mountaineer, would you be willing to travel to far and remote places? Vinson Massif is made for the bold adventurers willing to face the mountain’s greatest threat: extreme temperatures. Since this is located in Antarctica, expect overwhelmingly low temperatures and strong winds.

Depending on the weather conditions and skill level of the mountaineers, it will take about 7-21 days to reach its summit. The remoteness of Vinson Massif makes it difficult to access proper hospitals, so come prepared with all the tools needed for your expedition. 1,400 climbers have attempted to reach the top of Mount Vinson, one of the hardest

Between Argentina and Chile, there is a captivating mountain regarded as a climber’s dream destination. With this irreplaceable beauty, Cerro Torre challenges experienced mountaineers in a 4–7-day expedition. Even though the timeframe is relatively lesser than the rest of the hardest mountains to climb, be prepared to face overhanging and vertical sections. Because of this, it is recommended to have both alpine hiking and rock climbing skills to successfully conquer this legendary mountain.

Formerly known as Mt. McKinley, Denali is located in Alaska, North America. It is the tallest mountain in the region, exposing itself to bitter weather conditions. Mountaineers must brace themselves from potential altitude sickness and lack of oxygen. Be reminded to drink up and bring adequate water for your 21-day journey! Denali only has a 50% summit success rate but hikers won’t be discouraged. One elite climber expressed the view from the mountain is as spellbinding as looking out through the ”Windows of Heaven”.

Of course, we couldn’t miss out the world’s most famous mountain! The reason it rests in the middle of the list is its easy level of technical difficulty on certain stages. Many people unsurprisingly regard this is a destination. With that, Mount Everest in Nepal became highly commercialized, offering local assistants at the base camps.

However, don’t let your guard down as this is still one of the hardest mountains to climb, mostly due to unstable weather. Its fatality rate is 1.4%, relatively low in numbers, considering the number of people climbing here. Since this is the tallest mountain, altitude sickness, pulmonary edema, and frostbite are common occurrences. Mountaineers should consider the risk factors of falling, cold exposure, and avalanches. It might look easy, but it’s one of the hardest mountains to climb in bad weather.

If you know Toblerone, then this mountain in the alps of Switzerland would look familiar to you! The Swiss chocolate brand took inspiration from the famous Matterhorn. However, beneath that sweetness lies the bitter journey of climbers attempting to summit this stunning mountain.

A staggering 500 people already died from the avalanches and rockfalls. During the summer, lots of people visit to reach the peak in favorable weather conditions. It’s a golden rule to always check the weather forecasts to check the status before embarking your unforgettable hiking journey.

You might be surprised to know that a non-eight-thousander belongs to the higher ranking of the hardest mountains to climb. Don’t underestimate The Eiger’s technical difficulty. Rising only 3,970 meters above sea level, the mountain has a terrifying section known as ”Murder Wall.”

It is nestled in the north face, featuring a huge wall of shattered limestones and the melting of snow, posing the threat of falling debris. Not all mountaineers make their way to the top because of these challenges.

Only the brave ones can trek through the steep and rocky terrain of Baintha Brakk. Located in Pakistan, the mountain was coined as ”The Ogre” because of how menacing it is. The challenging topography made previous mountaineers suffer from broken bones.

Walking under the unstable ice walls remains a challenge. At the same time, unpredictable weather can make your journey tough. The rope is your best friend on the journey up Baintha Brakk. It helps to learn self-arrest techniques.

This is another notorious mountain in Pakistan – ”Killer Mountain. ” It claimed the lives of around 80 people based on official records as of 2019. Being caught by an avalanche is still the leading cause of death in Nanga Parbat. In addition, falling and exposure to coldness are other common threats. It is not only these dangers that took lives of climbers here, though.

In 2013, 11 people were killed due to a terrorist attack on the base camp. Snow blindness and frostbites are usual occurrences, but you can prevent them by wearing adequate and well-fitted hiking clothing plus wrap-style snow goggles.

Also known as the home of rakshasa or “Man-Eater,” Mount Kangchenjunga of Nepal and India is not only a tough mountain to climb but also a religious site for the region’s Buddhists. Because of the latter, not all climbers ascend to the peak. It is wiser to do it that way due to the difficulty of returning from the peak.

The leading causes of death are sudden avalanches and altitude sickness. To this date, Kangchenjunga has a high death rate of 22%, bagging third place of the hardest mountains to climb. It has been studied that most deaths take place around the 8,000-meter areas. Don’t forget to hydrate before and during your expedition to help prevent the lack of oxygen.

Located between China and Pakistan, the mountain K2 is the second tallest and second most challenging mountain. Why? Based on statistics, one out of four climbers never return. With this, only experienced hikers dare to attempt trekking this treacherous mountain. You have to cross the infamous ”Bottleneck,” which is the fastest route to the peak.

Consisting of an immense ice wall right under an overhanging glacier, this is the most dangerous section. Besides that, the objective hazards such as avalanches and even falling rocks can take place during your 40–50-day hike to the summit. Just a few tips: Move through the trickiest parts cautiously by always using a new rope. Never use an old one. Remember to pull the rope before clipping in.

Again, do not confuse yourself by correlating height and a mountain’s technical difficulty. Even though Annapurna is merely one of the Top 10 Highest Mountains In The World, it tops as one of the most difficult mountains to climb. Factors including the challenging terrain, climatic conditions, and its remoteness are the top reasons for this. Climbers are faced with many steep slopes, threatening crevasses, and gigantic ice walls.

Top that with the frequent avalanches and the falling of debris at any moment! Because of this, mountaineers should be aware of these dangers all, the time. Once you step into this menacing terrain, you are in a place of isolation. Local support is poor and due to the unstable climate, help either by air or land would be difficult, if not, impossible during emergencies.