Top 12 Things To Do In Gdansk 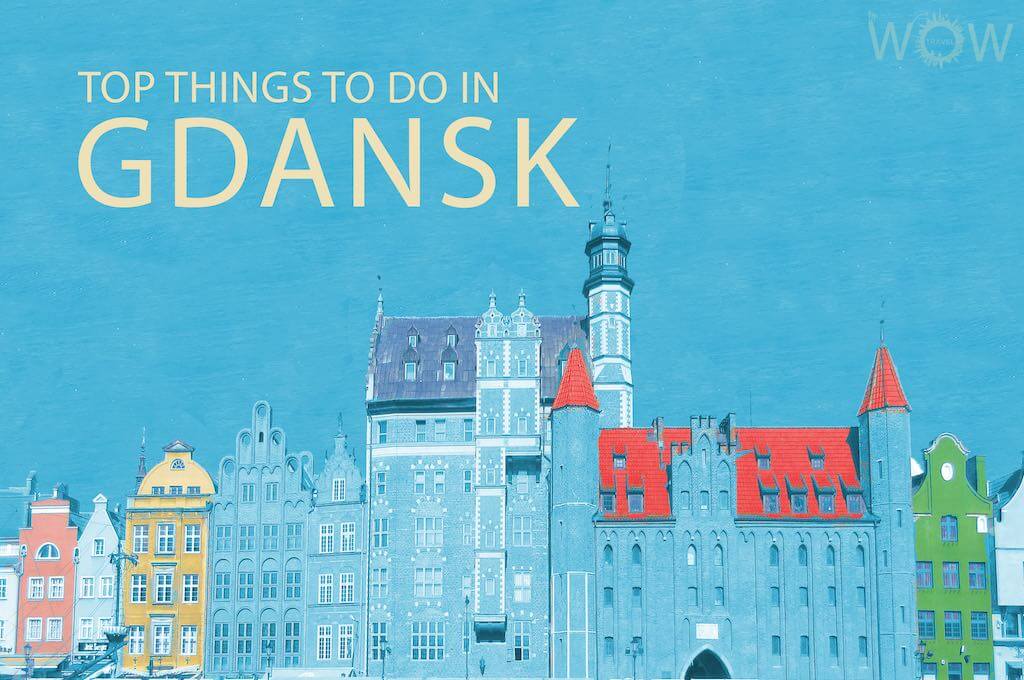 Gdansk or Danzig (in German) is a Polish port city stationed at the mouth of the Motlawa River on the coast of the Gdansk Bay (of the Baltic Sea). Originally a center for European merchants, Dutch traders, and shipbuilding, the city, later on, flourished as a major center of art, architecture, and education in Poland. The city of Gdansk is studded with historical monuments, palaces, museums, theatres, markets, fortresses and amazing water routes (famous for amazing ferry trips around the city!). The grandeur and architectural heritage of the Gdansk have been restored after World War II (WWII) damages. With an amalgamation of rich past and supreme modern urban attributes, Gdansk will take its visitors through an everlasting journey along the crests and troughs of time! Here are the top picks at Gdansk:
[booking_product_helper shortname=”gdansk”]

The landmark for the ceremonial entry of the Polish Monarchs, The Royal Road of Gdansk was constructed in the fifteenth century. The iconic Upland Gate (evidence of Polish fortification) marks the beginning of the long Trakt Królewski. There are numerous monuments and historically significant buildings along the Royal way which include the prison tower complex, the Amber museum, the Golden gate, Historical museum of Gdansk, Ferber House (Renaissance tenement house), the Lwi Castle, the town hall, the Green Gate, the Golden tenement house, etc. Besides these, the iconic Neptune fountain and the long market are also located along the Royal way. Undoubtedly, Trakt Królewski is the prime route of tourist interest in Gdansk.

The St. Mary’s church is famous for its distinctive fusion of medieval and modern architectural masterpieces. It is the world’s largest brick church with its quintessential tower being the prime attraction (one can certainly lose some calories here while climbing a good number of stairs!). The view of the city from the tower-top is certainly a treat for the visitors. The stunning medieval European glass art and the model of the weeping Christ (WWII memorial) further add to the splendor of the church.

Positioned at the old Gdansk city plaza, Neptune’s fountain is a small but astonishing landmark of tourist attraction. The original statue was built in the 17th century in front of the Artus court with Flemish mannerism. The sculpture was reconstructed and remodeled to Rococo style later to enhance the ornamental attributes of the Greek god of the sea (Neptune). The statue adds to the authenticity of Gdansk’s medieval attire and suits its backdrop comprising historical monuments. It is a certain halt of a huge number of tourists during the city tour and a hotspot to click some memorable postcard photos (or selfies!)

The earliest historic mention of the crane dates back in the fourteenth century which was remodeled numerous times. The giant wooden crane served the Gdansk Port for centuries to place masts on ships and to load ship cargo. The wooden part of the crane was destroyed during WWII leaving with the brick foundation intact. It was rebuilt to restore its former look and handed over to the Maritime Museum. The crane at present is an attraction for tourists as a museum due to its interesting historical exhibits related to the Gdansk port.

Westerplatte is one of the most famous battlefield memorial monuments. A tourist cannot but miss the opportunity to visit Westerplatte since it is the site of the first shots of WW II. The monuments are unique pieces of contemporary art that commemorates the bravery of Polish soldiers against the huge Nazi army. The park around the monuments is beautifully maintained to be the perfect war memorial. Many photographs from the day and personal stories are exhibited here as poignant reminders of all the sufferings of war.

Built during the early seventeenth century, the Golden Gate is situated at one end of Dluga Street and happens to be a popular historic site of tourist interest. It is the hallmark of old Gdansk fortification together with the Brama Wyżynna (high gate) and Wieża Więzienna (Prison tower). This architectural splendor is evidence of Dutch mannerism and late-Gothic building structure. The unique aspect of the gate lines in its attics, with figures depicting the qualities of an ideal citizen such as peace, liberty, wealth, fame, agreement, justice, pity and prudency. The iconic inscription at the gate (written in German) translates as “They shall prosper that love thee. Peace is within thy walls, and prosperity within thy palaces.” – Psalm 122.

The European Solidarity center of Gdansk, built in recent times is a museum library that houses 2,000 exhibits and 100,000 books and documents as permanent exhibits. It is a splendid building of tourist interest designed by Polish firm FORT Architects and was the winner of the esteemed International architectural competition. The walls of the Solidarity Center depict the hulls of ships that are built at the Gdańsk Shipyard. It is devoted to the history of solidarity, the Communist movements of Eastern Europe and Civil resistance movements.

Located at the Jantarowa region of Gdansk, the Jelitkowo Beach is an amazing place to escape from the city crowd and relax for a few hours. The Jelitkowo beach is one of the cleanest beaches of the world that attracts a huge number of tourists. This region of the Baltic Sea is calm, warm and perfectly poised for sea bathing as well as water sports. There are beach cafes and restaurants offering fine dining and refreshments to the visitors.

Museum of the Second World War

The Museum of the Second World War was opened in 2008 by Polish Prime minister Donald Tusk. The museum attracts tourists due to its unmatched 40-meter tall leaning tower with a glass façade structure that was designed by a Polish architectural firm and the design was selected through an architectural competition. The Motlawa River and historic Polish Post Office are located nearby. The museum contains military exhibits, books, photographs, epitaphs, vintage vehicles, writing-printing instruments and uncountable articles contemporary to WW II, of which, the most famous exhibit being Joseph Stalin’s pipe.

The Ronald Regan Park was opened in 2006 utilizing the barren lands of 0.4 square kilometers area in the outskirt of the main city of Gdansk. It was built in honor of the Polish President Ronald Reagan, who was a significant figure in the fall of Communism in Poland along with Pope John Paul II. The park is an amazing green stretch with scopes for cycling and jogging in well-paved paths besides relaxing in comfortable park benches.

Situated in the district of Oliwa, the Zoological Garden of Gdansk is the largest Zoo in Poland in terms of area. The zoo covers an area of 124 square kilometers and is a member of the European Association of Zoos and Aquaria (EAZA) and the World Association of Zoos and Aquariums (WAZA). The modern zoo has moved beyond the conventional zoo attributes by successfully participating in the breeding program of Andean condors (renowned around the globe) and conservation projects as a member of European Endangered Species Programme (EEP). The amazing wildlife includes Rothschild’s giraffes, leopard, meerkats, takin, lions, anoas, Javan lutungs, pygmy hippopotamuses, jackass penguins, bongos, Bali mynas, mandrills, yellow anacondas and so on! The wildlife of the zoo represents a fascinating unmatched fusion amidst a historic city to its visitors.

Wisłoujście Fortress – The Wisłoujście Fortress is a remarkable fortress of historic significance located by the estuary of the river Vistula and the Bay of Gdansk. The building is an architectural marvel owing to the amalgamation of different architectural styles (predominantly Gothic) and interesting building materials. The basement of the fortress is made of wood which is heaped upon with rubbles and bricks to form a steady masterpiece. The unique feature of the Fortress is its circular tower surrounded by a brick flange. The tower used to be a lighthouse till the nineteenth century. The fortress has been attacked by invaders numerous times especially to establish their naval base at this prime location. The fortress will take its visitors on a time trip of battles and braveries of European soldiers across centuries!