Top 8 Things To Do In Cayman Islands 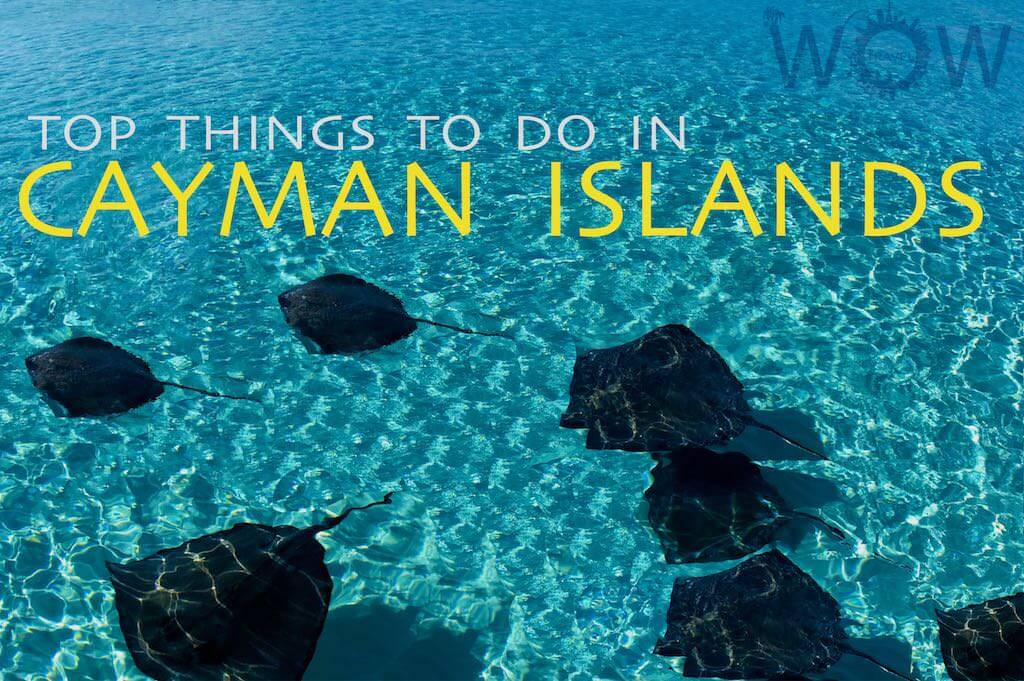 The Cayman Islands are an overseas British territory located on the Western Caribbean Sea, 145 km (90 miles) south of Cuba. The country is made up of 3 islands namely; Cayman Brac, Little Cayman, and Grand Cayman. It became famous in the 1980s for its rich offshore banking system and nowadays it is the world’s 5th largest financial center, only trailing London, New York, Hong Kong and Tokyo. But don’t let this banking capital fool you, there’s more to the islands than its international reputation would have you believe. The beautiful coral reefs and crystal clear waters have made this group of islands a favorite destination for divers. From top-notch resorts and sugary white sand beaches to exquisite dining and exciting nightlife. The Cayman Islands has it all. That’s why we suggest you take a look at the list of made of the Top 8 Things To Do In Cayman Islands.

The world famous Stingray City is an absolute “must-do” for any visitor to Cayman and is often described as the experience of a lifetime. Stingray City is home to approximately 75 Southern Stingrays that you can touch and swim with. These wild, gentle and graceful creatures roam free in the North Sound, a 35 square mile area of ocean protected by the reef. Even the most seasoned traveler will be enchanted by these beautiful animals. Source: explorecayman

Cayman Turtle Farm is Cayman’s largest land-based attraction. Swim with turtles in a lagoon full of colorful marine life. Come nose to nose with sharks & other predators of the sea. Explore a free flight zone filled with local and exotic birds. The Cayman Island Turtle Farm is home to 16,000 green sea turtles.

Seven Mile Beach (SMB) is a long crescent of coral-sand beach on the western end of Grand Cayman island. It is known for its beautiful coral sand, lined with the best hotels in Cayman Islands and provides plenty of water experiences including boating and snorkeling. People think the Seven Mile Beach is called so because of its length, but it is actually 5.5 miles (8.9 km) long. The Cayman Islands are filled with plenty of other great beaches such as: Cayman Kai Beach. Rum Point Beach and Heritage Beach.

George Town is an offshore banking hub (It has over 600 banks) and Cayman’s attractive capital. Grand Cayman’s bustling little town is home to many restaurants, activities and duty-free shops by the waterfront, as well as being the gateway to Cayman Islands cruise ships from around the world.

Pedro St. James Castle is the oldest existing building in the Cayman Islands. Pedro St. James has served a number of functions: plantation home, jail, the birthplace of Cayman democracy and the spot where slavery was abolished on these islands. The house’s sturdy walls have withstood two earthquakes, three fires and more than a dozen hurricanes, and the site is now home to a slick multimedia presentation and a small but surprisingly informative little museum that walks visitors through a thorough history of the Cayman Islands. Source: readersdigest

There is actually a town called Hell in the Caymans. Hell is an area of dolomite that’s been worn into sharp pinnacles by small, carbonate-eating organisms, a little imagination turns this place into a place of simmering brimstone.

The Mastic Trail, stretching for 3.2 km (2 miles), provides a rare chance to experience a fascinating journey into Grand Cayman’s wild interior, an area where woodland has been left virtually undisturbed for 2 million years. Guided tours along the length of the trail take 2 1/2 to 3 hours. Mastic Trail is home to a wide variety of plants and animals unique to the Cayman Islands. Fauna includes the stripe-headed tanager, along with various other species of birds, the Cuban tree frog, and the racer snake. You will be walking through one of the last remaining examples of the Caribbean’s dry, subtropical forest. Throughout much of the West Indies, these types of forests have been the victims of particularly intense deforestation. One part of the Mastic Trail on Grand Cayman goes through a black mangrove swamp. The highlights of this part of the trail are the mastic trees, from which the Mastic Trail takes its name. This type of tree is famous for the veins on its self-peeling bark, and there is both a black mastic tree and a yellow one on the trail. Source: grand-cayman-beach-suites

Grand Cayman diving lets visitors choose from a wonderland of more than 159 of the best dive sites in the Caribbean. It’s all here: steep, deep walls adorned with sponges and corals in a stunning array of colors, shallow reefs filled with schooling and solitary fish and small invertebrates, and wrecks featuring photogenic structures and curious marine residents. There’s also the World’s Best 3.7 meter (12 Ft) Dive – unique Stingray City. The Kittiwake is Grand Cayman’s latest dive attraction and is quickly becoming one of the most popular Caribbean dive sites. After a triumphant sinking in 2011, the former submarine rescue vessel has taken up vibrant residency along the northern tip of Seven Mile Beach. Grand Cayman’s reefs offer a variety of marine life encounters.