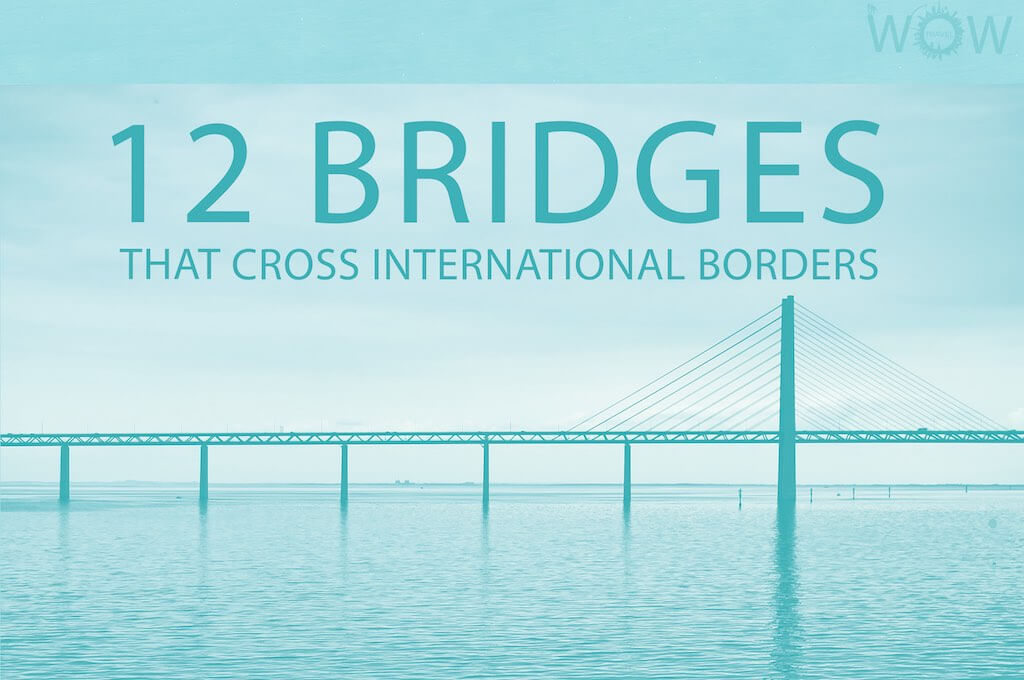 Bridges have been around since time immemorial, as man has attempted to cross raging rivers or great divides. From fallen trees and stepping stones to boardwalks, rope bridges, and the engineering wonders we see today, bridges have been the vital link for connecting places. Throughout history, bridges have also had their fair share of controversy especially when they have been the link between two different nations. Bridges that begin in one nation-state and end in another have been featured in quite a few films for the roles that they have played in shaping a nation’s history. The 12 cross border bridges listed below, may not all have grand designs but some do have a bit of intrigue and history attached to them.

There are two bridges 704 meters long (2,310 ft.) that span the Iddefjord River connecting Norway and Sweden. The old bridge called Svinesundsbron in Swedish was opened with great fanfare in 1946 by the king of Norway and the Swedish crown prince. Although the old bridge had been built during the period between 1939 and 1946, the opening was delayed because of the war. The newer version which cost £46 million was built between 2003 and 2005 and opened for traffic on June 13, 2005.

The arch bridge across the Niagara Gorge is a well-renowned tourist site connecting the cities of Niagara Falls in the United States and Canada. Both cities on either side of the 440 meters (1,450 ft.) bridge share the same name. The bridge was officially opened on November 1, in 1941 and has since been a popular destination for tourists wanting a better view of the beautiful Niagara Falls. Post 9/11 security on the bridge has been tightened and strolling over the bridge is not as easy as it used to be.

The River Oder serves as the border between Poland and Germany, extending for 200 miles (321 Km). The town of Slubice which is now a part of Poland sits just across the river from the town of Frankfurt an der Oder in Germany. The 220 meters (722ft) bridge that connects the two towns is an open border bridge which means that residents can walk across to either town freely, without having to prove their nationality. However, this was not always the case. During the Cold War and even after the reunification of Germany until 2007, rigid border controls made it difficult for residents between the two towns to cross over. This changed in 2011 when all barriers for Polish workers entering Germany were removed.

Bridge of The Americas, Panama–United States

Originally named Thatcher Ferry Bridge, the Bridge of the Americas is a cantilever bridge which has a total length of 1,654 meters (5,425 ft). The bridge which connects Panama to the United States of America was once a key part of the Pan-American Highway. Built between 1959 and 1962, the bridge was the main connecting route between America and Panama until the Centennial Bridge was opened in 2004 to ease the congestion on the bridge. The clearance under the main span is 61.3 meters ( 201 ft) which is quite restrictive for ships crossing under this bridge.

The cable-stayed bridge across the river Guardia is 666 meters long and connects the town of Ayamonte in Spain with that of Castro Marim in Portugal. Completed in 1991, the bridge links Portugal’s A22 motorway to Spain’s A-49 Motorway. The bridge is one of the longest in Spain and the third-longest bridge in Portugal. A smaller bridge 20 miles upstream, near the Portuguese village of Pomaro, the Lower Guadiana International Bridge, also connects the two countries.

The Victoria Falls Bridge was inspired by Cecil Rhodes who instructed his engineers to build a bridge across the Zambezi River so that the trains passing by would catch the spray of the Falls. Unfortunately, Rhodes never got to see the bridge as he died before construction began. The parabolic arch was prefabricated in England and then shipped and transported to the Victoria Falls where it was set up in 14 months. The 198 meters (650ft) bridge which was opened on 12 September 1905 by Professor George Darwin (son of Charles Darwin), connects Zambia and Zimbabwe.

This cantilever road bridge built across the Uruguay River connects Argentina and Uruguay. The total length of the bridge is 3,408 meters (11,181 ft) with a larger portion of it lying inside Argentina. Opened on September 16, 1976, the bridge was named after General Jose de San Martin, a key figure in both country’s struggle for independence from Spain.

Better known as Fraternity Bridge, this hollow box, cantilever bridge connects Brazil with Argentina. The 489 meters (1,604 ft) bridge built over the Iguassu River, was officially opened on November 29, 1985. It is named after Tancredo Neves, a Brazilian politician who was elected as the President of Brazil in 1985 but died before he took office. The bridge serves as a good vantage point for viewing the Iguacu Falls.

This rather fascinating bridge is located in the Joint Security Area and connects the two Koreas across the Sachong River. The bridge is no longer in use but has a lot of historical significance. The reason for its name is because of Operation Big Switch, a prisoner exchange agreement which took place here after the Korea war in 1953. Prisoners had to choose which side of the bridge they chose to live in and once they had made their choice, there was no turning back, hence the name. The bridge was used for prisoner exchanges once again in 1968 when the crew of the USS Pueblo were released and crossed into South Korea via the bridge.

Øresund Bridge which runs across the Øresund Strait connecting Copenhagen in Denmark to Malmo in Sweden is the longest combined road and rail bridge in Europe. This 7,845 meter (25,738 ft) cable-stayed bridge which starts at the Swedish coast ends on the artificial island Perberholm which is in the middle of the strait. The rest of the crossing is completed through the 4 km Drogden Tunnel. The reason for having a tunnel rather than continuing with the bridge was to avoid interference with air traffic from the Copenhagen Airport and also to provide a clear channel for ships no matter what the weather conditions. The Øresund Bridge which opened on July 1, 2000, received the IABSE Outstanding Structure Award in 2002.

This pale green suspension bridge built across the Saint Lawrence River and Saint Lawrence Seaway connects Ogdensburg in the United States to Johnstown in Canada, which is a few kilometers east of Prescott. Due to its proximity to Ottawa on the Canadian side, the 2.4 km long bridge is a popular border crossing for passenger vehicles. The bridge came into the public eye in 2015, when the Prime Minister of Canada at the time, Stephen Harper, made a faux pas when he stood in front of the bridge and praised the local shipbuilding industry. The problem was that he seemed to have stood in front of the wrong bridge as the shipbuilding industry he was referring to was in Halifax, Nova Scotia.

This 248 meter (814 ft) arch bridge is the world’s longest single-span bridge which is exclusively for pedestrians and cyclists. The Three Countries Bridge gets its name because of its location between Switzerland, Germany, and France. The bridge which was opened in July 2007, was assembled in Huninge and then transported to its current location on the river Rhine.