12 Most Polluted Cities In The World 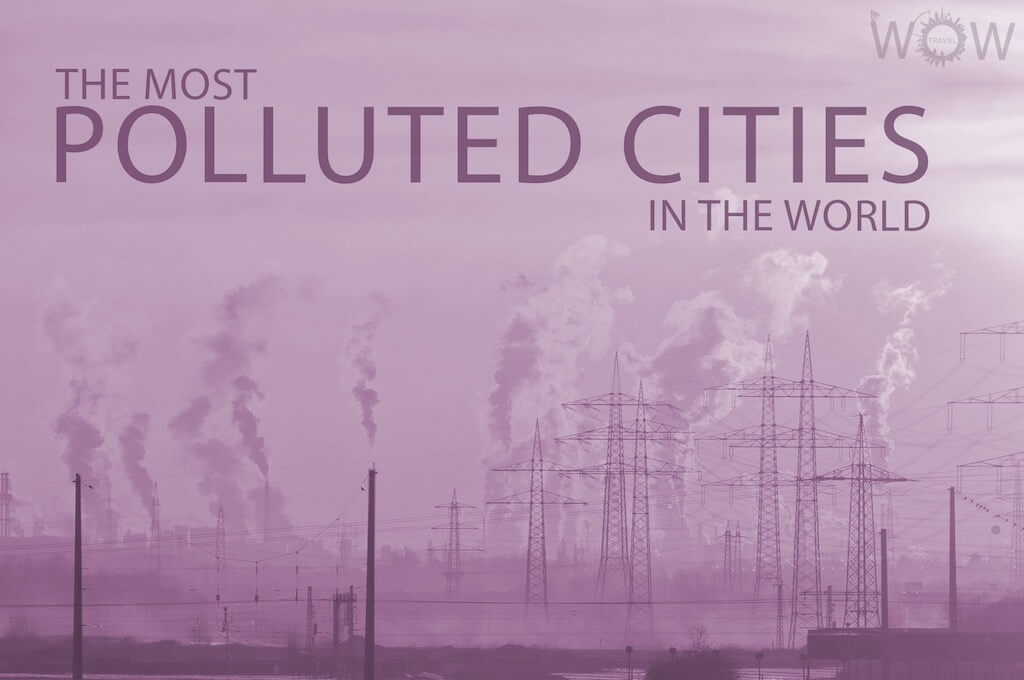 Every year, the World Health Organization releases its list of the world’s most polluted cities and this year, nearly all of them are in India. While the list mainly focuses on air quality, it does consider other types of pollution. Not only do these cities experience a higher rate of health conditions, but pollution also has a significant effect on the climate. Let’s take a look at some of the cities who need to clean up their act.

Gurugram, also known as Gurgaon, is a city located in the northern region of Haryana, India. The city which has an estimated population of 900,00 has been named the most polluted city in the world. The former head of the Central Pollution Control Board, Dipankar Saha has claimed that “the air quality in the region is problematic due to the accumulation of dust from neighboring areas and poor ventilation index”.

Ghaziabad, often referred to as the “Gateway of UP” is a city located in the state of Uttar Pradesh, India. The city is home to many beautiful temples, but it is one of the most polluted cities in the country and the world by extension. In some parts of the city, the air quality is so bad that it causes breathing discomfort for most people during prolonged exposure. Drinking water pollution and inaccessibility is also an issue in Ghaziabad.

Once called Lyallpur, the city of Faisalabad is the third most populated city in Pakistan. The city has grown as a major industrial and distribution center and with that, so has the city’s pollution. Faisalabad is currently listed as the third most air polluted city in the world. The smog in the city is often very thick, and there are times when it is recommended to wear masks outdoors. Improper disposal of garbage is one of the most significant problems in the city.

Faridabad, which is located in the north India state of Haryana, is the largest and most populated city in the region. Described as one of the fastest growing cities in the world, the city’s pollution has increased significantly over the last few decades. In October 2018, local news outlets stated that the pollutions level are 25 times higher than what is considered safe. It is thought that everyone living there may begin to experience health effects as a result.

Noida, which is short for New Okhla Industrial Development Authority, is a planned city in the Uttar Pradesh, India where it was ranked as the Best City. The city is also one of the top realty destinations in the country. Water, noise and air pollution seem to be at the top of the list of issues that the city faces, and quite a number of residents are dissatisfied with the amount of green space and parks there are in the city.

Panta, the capital and largest city of Bihar, India is one of the oldest inhabited cities in the world, and as it turns out, it is also one of the most polluted. Because of this, there has been a rise in respiratory ailments including asthma, lung cancer as well as many other diseases. The dense smog, especially during the winter months, has resulted in both air and traffic disruptions. Noise and light pollution also pose a threat to the city.

Kanpur, home to the J.K. Temple, Moti Jheel, the Blue World Theme Park, and the Kanpur Zoological Park, is a city in Uttar Pradesh, India. The city which was once called Cawnpore is known for its different chemical and textile industries. In 2018, WHO listed the city as one of the worst when it comes to air pollution in the world. Its biggest hospital is said to be overcrowded with patients suffering from respiratory ailments.

Lucknow is the largest city and the administrative headquarters of the Uttar Pradesh, India. Lucknow is an important tourism center, and it is home to monuments like Bara Imambara, Rumi Darwaza, and Ambedkar Memorial Park. Despite the fall in pollution levels, the city is still one of the most polluted in the world. It faces a number of issues, from air to water, as well as noise pollution.

Lahore, a city located in the Punjab province of Pakistan. The city is currently ranked as the 10thmost polluted in the world. It’s the biggest issue is air pollution which is in part due to crop burning, traffic and industry pollution as well as the burning of solid waste. According to Airvisual.com, the air quality in some regions is unhealthy for sensitive groups of people. That said, there are still things to do in Lahore which make it worth a visit or two.

Dehli, the location of Red Fort, Qutub Minar, and Humayun’s Tomb, is one of the most visited places in the world and it is also one of the most polluted. Some sources indicate that as of December 2018, the pollution has reached its worst levels causing measures such as shutting down factories to be taken. There has also been an increase in respiratory illnesses such as asthma and lung cancer in the region. Planning to visit? Consider staying at one of the 11 Best Hotels Near New Delhi Airport.

The city of Jodhpur is the second largest in the Rajasthan, India. The popular tourist destination which has many forts, temples, and palaces is also one of the most populated cities. Health experts in the area have linked the increase in strokes, heart disease, and lung cancer to the increased presence of particulate matter in the air. Water, noise, and improper garbage disposal is also an issue.

Varanasi, sometimes called Benares, is a city located in the North Indian state of Uttar Pradesh. The city is also one of the holiest of the seven sacred cities in Hinduism, and it is also home to the Shri Kashi Vishwanath Temple, the Ramnagar Fort, and the Manikarnika Ghat. The city’s high population density has led to an increase in sanitation issues, mainly drainage and sewage. This has led to a higher risk of contracting water-borne diseases.