12 Places To Visit Before They Disappear 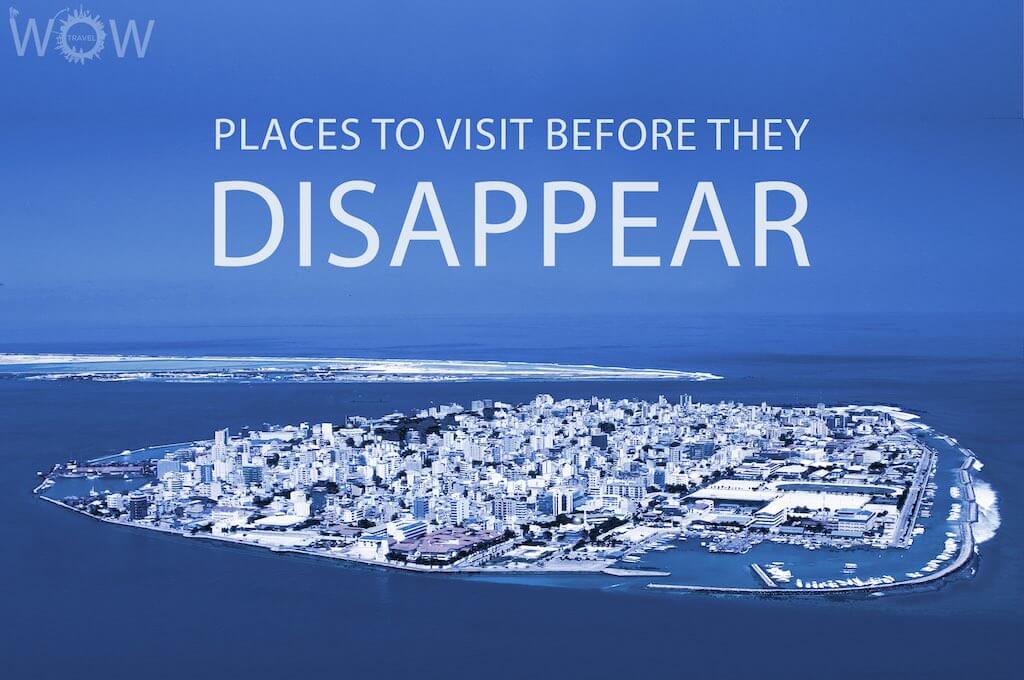 Traveling the world has been a lifelong dream for many of us. Yet our dreams are challenged year-by-year against some natural conditions causing the extinction of both more familiar and off-the-beaten-track places around the world and their ecosystems. Thousands of indigenous species, habitats, islands and mountains have been at risk for several decades now, perhaps, pushing dyed-in-the-wool travelers to their ultimate travel itineraries. To make the long story short, here’s our pick of the top 12 places to be visited before they disappear.

The largest and northernmost US state and home to Mount McKiney – the highest mountain throughout the continent, Alaska, comes on top of our list of the places exposed to climatic changes and namely, to ever-increasing global warming. High temperatures have reportedly induced glacial melting in great amounts that might enhance your interest in this travel destination. Chances are, ‘The Proposal’ starring Ryan Reynolds and Sandra Bullock may well further boost your passion in this direction.

The innate driest and coldest climate coupled with present-day atmospheric overheating has been the reason for the alteration of natural habitat on the southernmost continent, Antarctica. Since the continent is losing ice at a rapid rate thus threatening to the local fauna, traveling to Antarctica today seems to be both challenging and interesting.

After exploring the furthermost north and south, the European Alps spanning over several countries take the lead on our list of the top places worth visiting ad hoc. The reason consists of a relatively small height of the mountains compared to those scattered over the northern continent. Conspicuous changes in the ice layers reducing by 3% every year might well serve as a warning for their future loss. Until it is the case, we recommend fulfilled skiers and amateurs to make the best of their Alpine vacations.

The evocative mount of Kilimanjaro in Tanzania appeared to be equally vulnerable to the prevailing global climatic changes. A large amount of snow disappears regularly making the glacier reduce in size. Although many pieces of evidence have been introduced so far blaming global warming, the information about clear-cutting and dehydration seems to be more trustworthy.

Flat terrains are equally prone to hazard exposure due to the continuous rise of water level and climate changes. The renowned Galapagos Islands stretched along the shores of Ecuador in the Pacific make this fact explicit. The modification of the underwater ecosystem has a huge impact on the land surface and its habitat leading to the destruction of natural resources necessary for maintaining the existing species in their original condition. The local government has already taken measures with regard to this issue by reducing tourist flow to the destination and forming special shelters for penguins. This might serve as a primary reason for adventure seekers to head off to the Galapagos.

Another ambiguous destination is the Joshua Tree National Park in southern California. Located in the Mojave Desert and presenting a kind of a fusion of the Mojave and Colorado ecosystems, the park area still suffers from rainfall scarcity making it hard to maintain the natural ambiance. Regardless of that, the Joshua National Park worthily takes its place on our list of top travel spots to be visited before they disappear around the world.

Madagascar off the eastern shores of Africa has also been the victim of changes in the ecosystem as well as timber poaching over the past decades. Although unique Madagascar seems to be on the edge of extinction, adventure and luxury tours through Antananarivo, Ambositra, Antoetra and other destinations are still in demand.

Being included in the UNESCO World Heritage list, the Australia-based Great Barrier Reef has also been ranked among the top travel destinations this year. The natural biodiversity though originating from miniature algae and attracting thousands of tourists is at risk of vanishing that someday might result in the disappearance of the entire intensely hued reef. Hurry up to replenish your travel itinerary.

The next soon-to-be-doomed destination will lead you to the Dead Sea merging with the famous Jordan River. Being a relatively small body of water, it denotes the lowest point on earth that is also clearly visible on many photos. Highly salinous waters of the Dead Sea are said to possess some healing powers as well making the tourists happier after immersing into its muds. Yet, considering water reduction and condensation in great amounts every year, you are recommended to share the joy of other travelers in the near future.

Comprising a plethora of islands, this Indian Ocean-based resort offers the lowest stretch of terrain. This said, you can easily imagine the hazard caused by the water level elevation due to the rampant climatic changes.

Beloved by all, this Italian gem has allegedly been at risk of sinking for many years now. Special signs in the canal waters of Venice indicate the elevation rate throughout the year. Since alarming signals have not been received so far, the tourist flows never seem to decrease in number.

Rediscovered in 1911, the land once inhabited by Inca tribes is now among the top tourist sites. Atmospheric changes over the years have caused damages to the site that resulted in a deliberate reduction of travelers by the Peruvian authorities.

Having listed only a small number of the top travel destinations at risk of vanishing, we simply wanted to bring your attention to the marvelous bodies of land or waters worldwide in hopes that our survey will make you easily decide on your next destination.