11 Most Visited Cities in the World 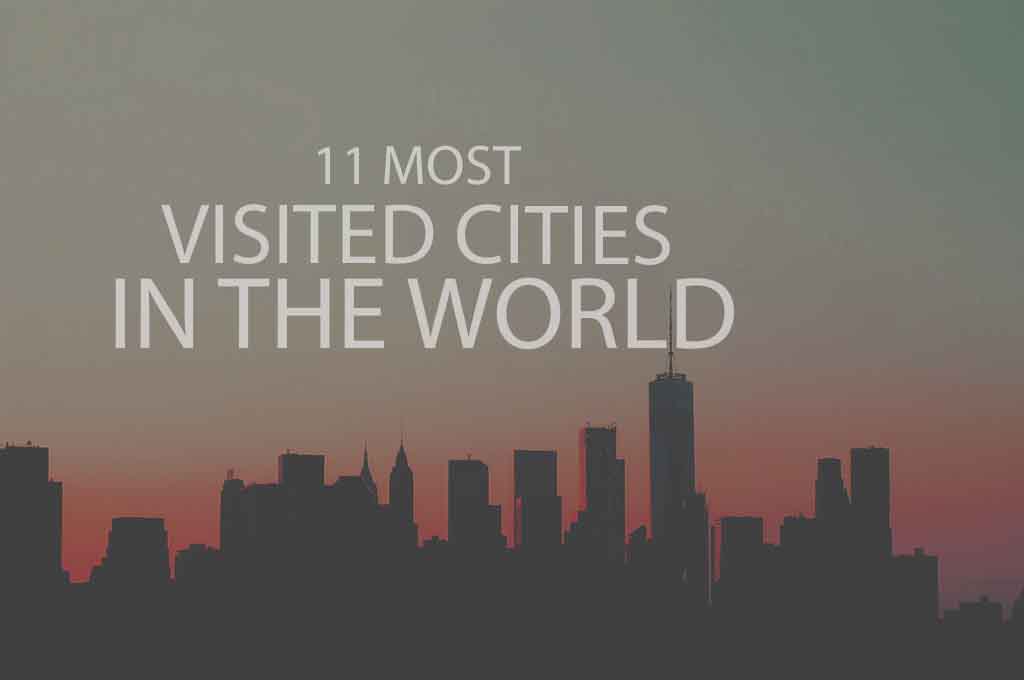 After being relatively quiet for the past two years, the most visited cities in the world are once again pulsating with life. Visitors are ticking off the places to visit on their bucket lists to make up for the lost time. While many are looking to quieter destinations away from the crowds, others are checking out the list of most visited cities in the world to marvel at their sights.

Given the seamless blend of diverse cultures, many of the most visited cities in the world lie in Asia. Delicious food, endless shopping, a vibrant nightlife, and mind-boggling attractions push these cities high up on people’s list of places to visit. Some of the cities on our list are so steeped in history that visiting them is like taking a step back in time.

As with many Asian cities on our list of most visited cities in the world, Kuala Lumpur is a treat for the senses. Whether it’s lip-smacking food, history, or shopping you seek, you will find all that and more in Malaysia’s capital city. Although the towering Petronas Towers brought KL into the world’s focus, visitors to the city have discovered there is so much more to explore.

And if you think steel-clad skyscrapers and mega-sized shopping malls are all that make up this city, you will be quite mistaken. Although the city does not have a very illustrious past, it has been the center stage in Malaysian history since being made the capital in the late 19th century.

With over 900 churches, 280 fountains, and museums galore, the ‘Eternal City’ tops the travel lists of many. Very few cities can rival Rome when it comes to its artistic heritage. Masterpieces abound in this city that shows off sculptures by Michelangelo and paintings by Caravaggio.

However, history and art are not the only features that bring visitors to Rome. The dolce vita lifestyle and delectable cuisine seduce the less discerning traveler into lingering here.

Turkey’s capital city Istanbul holds the distinction of being the only city in the world that straddles two continents. Due to its strategic location, it has seen many invaders over the years. However, the good thing about this is that many left their indelible print on the city.

The mark of the Byzantines is visible in the gorgeous mosaics and frescoes in churches and palaces. Subsequently, their successors, the Ottomans, put up magnificent buildings that give the city its unique look. Some of the top things to do in Istanbul is to visit these architectural wonders.

While the city’s monuments are the city’s main attraction, visitors also come here to soak in the culture. The infectious positivity of the locals, who seem to enjoy everything they do, also adds to the allure of the city.

Dubai is another land of superlatives, showcasing some of the best man-made structures in the world. Tallest, biggest, and most spectacular seems to be Dubai’s mantra. From the futuristic Burj Khalifa, one of the most expensive hotels in the world, to the Burj Al Arab and the artificial islands of Palm Jumeirah, these man-made attractions are worth the travel.

The annual Dubai shopping festivals also bring in the masses, pushing it up the ranks of the most visited cities in the world. Dubai’s shopping malls also wow customers with their fantastic range of products and snazzy designs.

While Dubai may not be the answer to the question of what’s the most visited city in the world, it is a magnet for visitors. Given its ease of doing business, the city does not only attract tourists but business people too.

New York, New York! Much has been said about the most populated city in the United States. It is a city that speaks many languages and dazzles with its diverse attractions. You will run out of time before you run out of things to do in New York City. Thousands pour into New York every year, pushing it to the top of the list of most visited cities in the world.

There is so much that makes New York City special. Attractions like the Statue of Liberty, Central Park, and The Empire State Building tick all the right boxes. Added to this is Times Square and Broadway, the place where dreams become a reality.

Like many of the most visited cities in the world, the pulse of New York is on its streets and restaurants. Home to a melting pot of cultures, the city has some of the best restaurants and excellent gourmet food trucks.

Reams have been written about Paris, the city of love. The favored destination of many star-struck couples, the city leaves one with a myriad of emotions. Beginning with its iconic architecture, most famously the wrought-iron Eiffel Tower and Notre Dame Cathedral, Paris will have you sucking in your breath in awe. A visit to the Le Grand Rex theater, one of the most amazing cinemas around the world, is also worth the hype.

Paris hits the top of the list of what’s the most visited city in the world. There is much to explore in Paris. Predictably it’s not just the architecture that brings people here. The city is about fashion, food, and artistic treasures. Art aficionados descend on the city that was once home to Picasso, Monet, Dali, and Van Gogh, among others. Marveling at the works of these masters at the Louvre or other renowned museums is an unparalleled experience.

And when one is done with all the wanderings, all you need to do is follow the aroma into a heavenly dining experience. France’s culinary scene will knock your socks off. Whether you’re popping into a neighborhood bistro or fine dining at a Michelin-starred restaurant, your tastebuds will sing!

Visitors to Singapore are often quite taken aback by the number of attractions the island city offers. Although you won’t find mind-boggling historical landmarks, there is plenty to see and do in Singapore.

The reason why Singapore makes it to the list of most visited cities in the world is its growing commitment to the environment. This, combined with lip-smacking cuisine and futuristic architecture, make it a popular travel destination.

The city’s repertoire of being among the top safest cities in the world and its excellent public transport system also makes it a favored choice for travel. Being a major financial and shipping hub, Singapore also attracts a large business clientele, making it one of the busiest cities in the world.

Often referred to as the ‘Vegas of China,’ Macau enthralls with its glitz and glamour. This thriving metropolis sees a huge footfall of visitors throughout the year, putting it right up there on the list of most visited cities in the world. You can be certain you won’t be bored with the things to do in Macau.

Whilst many visitors to the city are here for business, there is an equal number here for pleasure. The city is a hotbed for gambling. In fact, Macau generates more revenue from gambling than anywhere else in the world!

As one of the earliest European colonies in Asia, the former Portuguese colony has many European influences. Visit the UNESCO World Heritage old city center to witness this interesting blend of cultures. Streets with Portuguese names resound with Cantonese while restaurants serve up the Chinese take on Portuguese cuisine.

Given its rich history and exciting present, London figures high on the travel lists of many people. There is much to do in London that could be the answer to what’s the most visited city in the world. While one of London’s main draws is the royalty associated with Buckingham Palace, the city’s popular landmarks also bring in the crowds. Iconic places like Westminster Abbey, Big Ben, Kew Gardens, and its numerous museums are big draws for visitors.

Another reason visiting London is so great is its efficient public transport system. Getting around one of the most visited cities in the world is pretty easy. In fact, The Shard, the Tower Bridge, and the Skydeck can all be visited in a day, even without a car.

London is not only about its rich architecture but is also the wide-open vistas and interesting markets. Hampstead Heath and the Queen Elizabeth Olympic Park are excellent places to get away from the crowds. Bargain hunters can head to Camden Market or the Bermondsey Antiques Market, one of the best flea markets in the world.

Thailand’s vibrant capital city, Bangkok, hits all the right notes when it comes to tourism. The myriad attractions that the city has to offer are quite bedazzling. The city has something for everyone, from awe-inspiring temples to its floating markets and ‘sordid’ nightlife. It’s no wonder Bangkok is a magnet for visitors, making it one of the most visited cities in the world.

Visitors to the city are often quite astounded by its multifaceted personality. Megamalls vie for space with ancient villages, while gold-spired temples often share their boundaries with sleazy strips. Here, street food is as popular as fine-dining restaurants. It goes without saying that Bangkok has the best value dining destinations in the world.

The street is where you’ll find the real Bangkok. Whether haggling for a good bargain at the markets or digging into a bowlful of Thai flavors, much of the city’s vibrancy is on its streets.

There is no doubt colonialism has left a distinct mark on the city. However, its Chinese roots are as evident. You can experience this vibrant culture at the marketplaces, galleries, theaters, and numerous concert halls and museums. It is quite safe to say that you will never run out of things to do in Hong Kong.

Besides the top-notch attractions, another reason for it being on the list of most visited cities in the world is its booming economy. It sees not only a huge footfall of tourists but also people who are here on business.

Hong Kong holds the distinction of having the largest number of skyscrapers in the world. However, this city of mortar and steel also has its fair share of expansive parks and mountains. You can take in the spectacular view of the city by riding to the iconic Victoria Peak in the 125-year-old Peak Tram.