11 Longest Rivers In The World 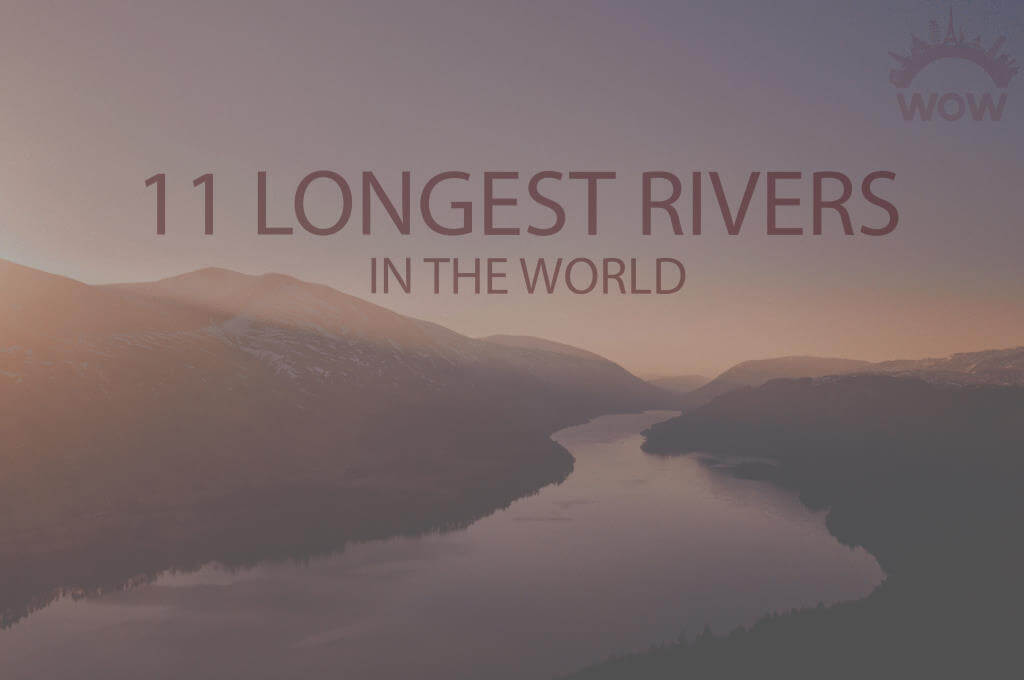 For thousands of years, rivers have always been the source of humans need from mother nature. We use them for drinking water, irrigation in agriculture, and transportation. Not to mention how rivers can produce electricity through hydroelectric dams. Nowadays, we seek leisure activities such as swimming, fishing, and boating in some of the best rivers. Now the question is: what are longest rivers in the world?

Some rivers in the world can be thousands of kilometers long. Besides, some of them even flow through several countries. To come up with a list of the longest rivers in the world, we need to consider many factors, such as the headwaters or the origin of a river. Some large and long rivers, like Nile and Amazon, have several sources and many tributaries.

Being the third-longest river that flows totally within Russia, the Lena River opens our list of the longest rivers in the world. It’s 4,400 kilometers long (approximately 2,734 miles). And it’s the easternmost of the three great Siberian rivers – about six thousand miles from St. Petersburg – that flow into the Arctic Ocean.

Covered by ice during the winter, it originates in the Baikal Mountains at the height of around 1,640 meters, more than a thousand miles. That’s west of Lake Baikal and south of the Central Siberian Plateau. Lena River flows northeast to the Arctic Ocean and the Laptev Sea.

As a traveler, you can experience a pioneering adventure by embarking on the Lena River Cruise. Cruising along the Lena River allows you to enjoy the most breathtaking and pristine scenery. You’ll also meet local families living in remote villages and visit the Lena Pillars, a UNESCO site.

Lena River Cruise is only available four times during summer as the river freezes during the winter. Generally, the cruise trip takes 13 nights. This is a unique and once-in-a-lifetime trip through the vast Siberian land. That said, the river can be visited during winter as well. Join the Ice Fishing Tour in Yakutsk for hours of fun!

The Amur – or Heilong Jiang in its native language – means Black Dragon River. It’s also known as Kharamuren by the Mongolians. The river flows 4,444 kilometers (approximately 2,761 miles) long. And it extends along the border of Heilongjiang Province in China and southeastern Siberia, Russia.

The Amur River is also one of the longest rivers in Asia. Its headwaters rise in the mountains of Russia, Mongolia, and Inner Mongolia. It flows from the Savana of Mongolia through the untamed wilderness of China and Rusia. The Amur ends at the Tatar Strait and empties into the Pacific Ocean.

The Heilong Jiang Province itself is a cold region in the farthest northeast China and famous for the Ice and Snow Festival. Its culture is mainly influenced by Russian customs, lifestyle, and traditions.

Next on our list of the longest rivers in the world is the Congo River. This one is a comprehensive course of water that provides food, water, transport, and medicine to about 75 million people along the basin. With a length of 4,700 kilometers (approximately 2,920 miles), it flows through nine countries in West Central Africa, making it the ninth-longest river in the world.

Formerly known as the Zaire River, The Congo is Africa’s second-longest river after the Nile. Its drainage basin takes in almost the entire territory of the Democratic Republic of the Congo. The river also crosses the Republic of the Congo, eastern Zambia, Northern Angola, and the Central African Republic, besides some parts of Cameroon and Tanzania.

Not only is it one of the longest rivers in the world, but the Congo River also holds the record as the deepest river on earth at 720 feet (220 meters). What’s more, the Congo River flows from eastern Africa through the Congo rainforest to the Atlantic Ocean. As a result, it crosses the equator twice!

Have you ever wondered what are longest rivers in the world that flow in South America other than Amazon? Paraná River, also known as Rio Paraná, is the second-longest river in South America after the Amazon. The river is 4,880 kilometers (around 3,032 miles) long. Its source lies in southern Brazil. And it flows further down through Paraguay, Bolivia, and Argentina, all the way to the Atlantic Ocean.

The name Paraná comes from the Tupi language to abbreviate the phrase “para rehe onáva,” which means ‘like the sea.’ It refers to the river’s size, which is as big as the sea to the people’s eyes. The river has about 2,8 million square kilometers of drainage basin, making it the second-largest on the continent.

The Paraná River ecosystem supports diverse animals and flowers, including endangered species like jaguars. It’s also home to migratory fishes, such as catfish, piranhas, and the Atlantic saber-tooth anchovy. Is it one of the most beautiful places in Brazil?

If you want to know what are longest rivers in the world that end in the Arctic Ocean, one of them is the Ob-Irtysh River. The Ob-Irtysh is also known as the Irtysh River or Ertis in Kazakh. It’s formed out of two rivers, the Ob and Irtysh Rivers which headwaters are in the highland on the borders of Mongolia.

The Ob-Irtysh River extends about 5,410 kilometers (around 3,193 miles) from the Altai Mountains in Central Asia. It’s the seventh-largest river in the world that stretches through Russia, Kazakhstan, China, and Mongolia. In fact, some of the top things to do in Mongolia lie near this river.

Its basin covers around 2,9 million square kilometers and mainly lies within Russia. Most of the waterways are frozen nearly all year long. While not frozen, it’s primarily used for transportation. The river basin stretches across grassland, semi-desert areas, hills, plains, and coniferous forests.

Next on our list of the longest rivers in the world is the Yellow River. Yellow River is also known as Huang He and also called Mother River. It’s originating on the Tibetan Plateau in the southern Qinghai province and passes over six other provinces and two autonomous. The river is the principal river of northern China and eastern and east-central Asia.

Its 750,000 square kilometers drainage basin is the third-largest in China, also considered the support of Chinese civilization for thousands of years. With a total length of 5,464 kilometers (approximately 3,395 miles), it is the sixth-longest river on the earth. It’s also the second-longest river in China after the Yangtze River.

Yellow River is also the world’s muddiest major river because of its slow and sluggish course. The river got the name because it contains vast amounts of loess sediment. You’ll find some top attractions around the Yellow River. These include Hukou Waterfall, ancient cities, Loess Plateau, and forest parks.

The Yenisei is a river in central Rusia that flows mainly in Central Siberia and empties into the Kara Sea. The city of Yenisei has various landscapes along the river, from valleys, mountains to the Arctic tundra. Unlike other rivers, you’ll find expedition cruises on this Siberian river. Travelers can experience a once-in-a-lifetime expedition trip cruise, including the Krasnoyarsk: Tour with Private Guide.

The river is an excellent source of hydroelectric power and fish, including salmon and sturgeon. Meanwhile, Lake Baikal is Yenisei River’s significant upper part of its basin. The lake is one of the deepest and oldest lakes in the world, also home to some plant and animal endemism.

Comprising of the Mississippi, Missouri, and Jefferson rivers, the river empties into the Gulf of Mexico. The Missouri River is the longest in the US. The Mississippi River itself is the second-longest in the country. The Missouri River comes across the Mississippi River near St. Louis – which makes the best view of some of the most romantic hotels in this city – and then joins the Jefferson River in Montana. As a result, these three rivers are grouped and become the fourth-longest river system in the world.

Mississippi River is home to a diversity of animals, including 25% of North American fish species. At least 326 species of birds, 50 species of mammals, and 145 species of amphibians inhabit this river.

Yangtze River has become essential to China’s civilization and houses one-third population in this country. It’s also the busiest river in the world and the home of the Three Gorges Dam, the biggest hydroelectric dam in the world.

This river has more hundreds of tributaries. Meanwhile, the river source is on the Tibetan Plateau glaciers in the mountains of Qinghai Province, China. The headwaters come from the Dam Qu tributary in Jari Hill, and the river empties into the East China Sea. In Forest of Stele Museum, Xi’an, you get to see the river’s flood control project.

The Amazon River flows through several countries, including Brazil, Peru, Bolivia, Ecuador, Colombia, Guyana, and Venezuela. In some studies, it’s believed that the origin of the Amazon can be traced to the Cordillera Rumi Cruz, north of Lima, on the glacial stream in Peruvian Andes.

As the largest river delta on earth, the Amazon River provides 20% of the ocean’s freshwater supply. It has countless tributaries that become home to hundreds of amphibians and thousands of fish. Amazon River is also home to famous animals, such as anacondas, piranhas, sloths, river dolphins, and many more. Witness them by joining the 8-hour Amazonas Jungle Treck.

Even without reading this list, when people think about what are longest rivers in the world, the Niles River usually comes to mind. Niles River, also called the father of African rivers, has a total length of 6,650 kilometers (around 4,132 miles). It’s known as Baḥr Al-Nīl or Nahr Al-Nīl in Arabic. The river is also the longest in Africa. But did you know that it’s one of the smallest rivers by water flow?

The two most important tributaries of the river are the Blue and White Nile. The Niles River flows over eleven countries. It flows all the way through Tanzania, Uganda, Burundi, Rwanda, Kenya, Egypt, the Democratic Republic of the Congo, Ethiopia, Eritrea, and South Sudan. It empties into the Mediterranian Sea.

In Egypt, some of the best hotels in Cairo near the pyramids offer magnificent views of this river. As one of the longest and largest rivers, the Nile has several sources of water. Also, it consists of large and small tributaries. Nile River has become the primary source of fresh water in ancient Egyptian dynasties and a source of irrigation. It’s the main source of water in Egypt and Sudan, also an important economic driver that supports agriculture and fishing.