14 Places You Are Probably Pronouncing Wrong 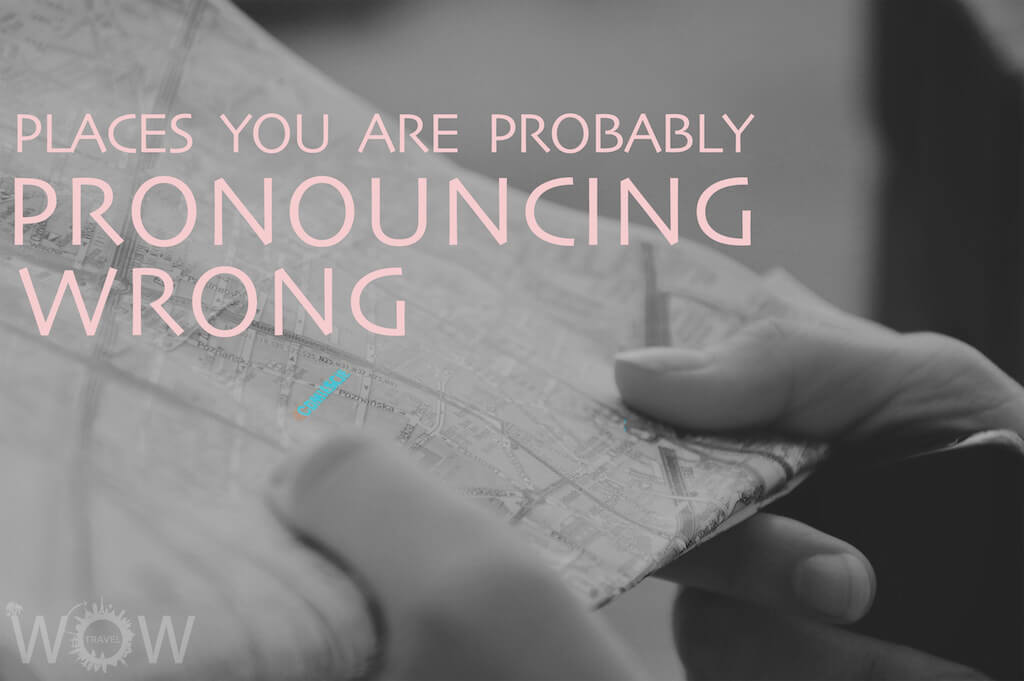 Google is considering a new map tool that will offer help pronouncing difficult place names. But meanwhile, many cities and places will continue to suffer as people carelessly botch their names. Most of us will probably never be able to pronounce “Beijing” exactly the way that a native speaker might, at least we should try. Check out these 14 Places You Are Probably Pronouncing Wrong.

There are over 31,000 Buddhist temples spread around Thailand and some of the most impressive are located in Bangkok, the capital city of Thailand and its political, social and economic center. These spectacular palaces and dazzling temples illustrate the glorious past of this great city. Their colorful street food stalls, a world-famous floating market and vibrant Chinatown, where you can buy clothes, accessories, shoes and souvenirs make of this city an unforgettable experience and a must on your travel agenda.

Budapest, the charming capital of Hungary is one of the most beautiful, delightful and hospitable cities of Central Europe. Attractions in Budapest are divided by the River Danube between the ‘Buda’ side with medieval heritage of Castle Hill and ‘Pest’ with wide 19th century boulevards and parks. Budapest is an easy city to fall in love with, there is everything from funky bars and local wine to gorgeous architecture and streets loaded with history. All major European roads and railway lines lead to Budapest, so it definitely should be on your itinerary when traveling to Europe.

Dubai, the world’s fastest growing city and one of the leading cities in the world, is quickly becoming a top glamorous, spectacular and futuristic urban destination among both tourists and businessmen for its warm climate and all year-round sunshine, white sand beaches, glitzy hotels, shopping malls, charming heritage attractions and a thriving business community. Dubai is one of seven states that comprise the United Arab Emirates (a country formed in 1971 from individual sheikdoms) and it is also its most populous city. It is a cosmopolitan, developed and sophisticated city filled with infinite attractions such as the world’s biggest mall, world’s tallest hotel, world’s second largest man-made marina, the world’s largest aquarium, the biggest indoor snow park in the world and man-made islands.

Iraq is the birthplace of many of the Earth’s oldest civilizations, including the Babylonians and the Assyrians. A part of the Ottoman Empire from 1534, the Treaty of Sèvres brought the area under British control in 1918. The political situation in much of Iraq remains extremely unstable and travel within Iraq remains dangerous.

If there is one city where everyone feels at home, that is Melbourne. This beautiful metropolis is made up of people from all over the world, 38% of its population was born overseas. Victoria’s vibrant capital is a wonderful city that is often ranked amongst the world’s most livable each year. It is a city that offers great hotels, excellent and diverse gastronomy, shows and entertainment for all ages and tastes. It has the highest number of restaurants and cafes per capita than any other city in the globe. Moreover, it is very easy to go from place to place in the city, Melbourne has the largest tram system outside of Europe, and the fourth largest in the world overall. Great weather, friendly and smiley faces everywhere, delicious food and more await you in Melbourne.

Although Phuket is only one of the 76 provinces that make up the country of Thailand, it is definitely the most beautiful one. Visited by millions, tourism has helped convert Phuket island into Thailand’s wealthiest province. 60% of the island is covered by tropical forest, rubber and palm oil plantations, and the rest is dozens of paradisiac beaches where snorkelers and scuba divers from all over the world spend weeks looking for exotic species of fish in this almost virgin oasis of life and beauty. For those who look for more than palm trees and beach, Phuket also offers many festivals, concerts, restaurants and a very exciting and different nightlife.

In the small Persian Gulf nation of Qatar, there is always something to do. You can play world-class golf, cycle along hundreds of miles of desert offroad, take road-trips to beaches, hunt for fossils or get lost in the desert dunes at the inland Sea. and visit the beautiful capital Doha. Qatar is the richest country in the world per capita (according to Forbes) and considering the money being poured into construction, Doha looks like it is set to become one of the premier cities in the gulf within a few years.

River Thames, crossing the city of London, is the longest river in England, it has 45 locks and it is home to over 25 species of fish. It is the only river in Europe to have a national trail follow its entire length.

Beijing, the Capital of China and one of the most populous cities in the world, is the center of the nation’s politics, culture and international exchanges and a modern metropolis full of vitality. Discover a metropolis filled with history and ancient sites racing into the future with its modern architecture and advanced technology. Walk along the world’s longest wall and biggest ancient architecture, the Great Wall or go back in time at the world’s largest palace, the Forbidden City. Beijing is significant in a number of ways and attracts visitors from all over the world.

It is the second largest French speaking city in the world (after Paris), originally called Ville-Marie, Montreal is named after Mount Royal, the triple-peaked hill located in the heart of the city. The main city of Montréal occupies a 48 km (30 mile) long island along the convergence of the St. Lawrence and Ottawa rivers. The island is linked to the mainland by a tunnel and 15 bridges, though most of the city’s main attractions are within decent walking distance of one another. Montreal diversity of restaurants, attractions and festivals makes it the perfect destination, whether your goal is romance, sightseeing or family fun.

This incredible city is one of the cleanest, safest, most peaceful and cosmopolitan cities in the world. One can listen to more than 180 languages in one day while wandering around Toronto. It truly is a melting pot, always ready to welcome visitors with open arms. Studies say that it is the 4th most livable city in the world. Tourists have an endless list of options when it comes to hotels, restaurants, museums, galleries, events, parks along with outdoors full-day activities. Toronto has more than 1,600 public parks and 600 km (373 miles) of trails which are visited by locals and visitors alike throughout the Spring and Summer months. Traveling between tourist attractions is really easy, Toronto has North America’s third largest public transit system after New York City and Mexico City, it is clean and efficient. Toronto’s unmatched diversity is incomparable, it is without a doubt Canada’s cultural heartland.

Located in the central highlands of Guatemala with charming old buildings, crumbling cathedrals, cobblestone streets, colorful palettes, bustling markets and buzzing cafes, Antigua is the last true Colonial City remaining in Latin America. It was once the glamorous capital of Guatemala before it was largely destroyed by an earthquake in 1773, left it mostly abandoned. Now the ruins are a tourist attraction. Antigua has retained its quaint, colonial charm and it is a perfect place for visitors to experience the true Guatemalan life.

Facing the incomparable Mediterranean Sea, in the heart of the French region of Provence-Alpes-Côte d’Azur, is Nice. France’s fifth largest city, a cosmopolitan town in the French Riviera near the border with Italy. Locals call this city, Nice la Belle, and it is in fact gorgeous. Everywhere you go, you will be amazed with its natural beauty and the warmth of its people. It was the inspiration of various painters in the world such as Arman, Niki de Saint Phalle, Henri Mattisse, and Marc Chagall. There are lavish and astonishing hotels, endless number of incredible restaurants, a vibrant night life, a breathtaking green sea and more attractions that bring at least 4 million tourists annually. Nice has a hot-summer Mediterranean climate, enjoying mild winters with moderate rainfall which makes it perfect for a vacation at any time of the year.