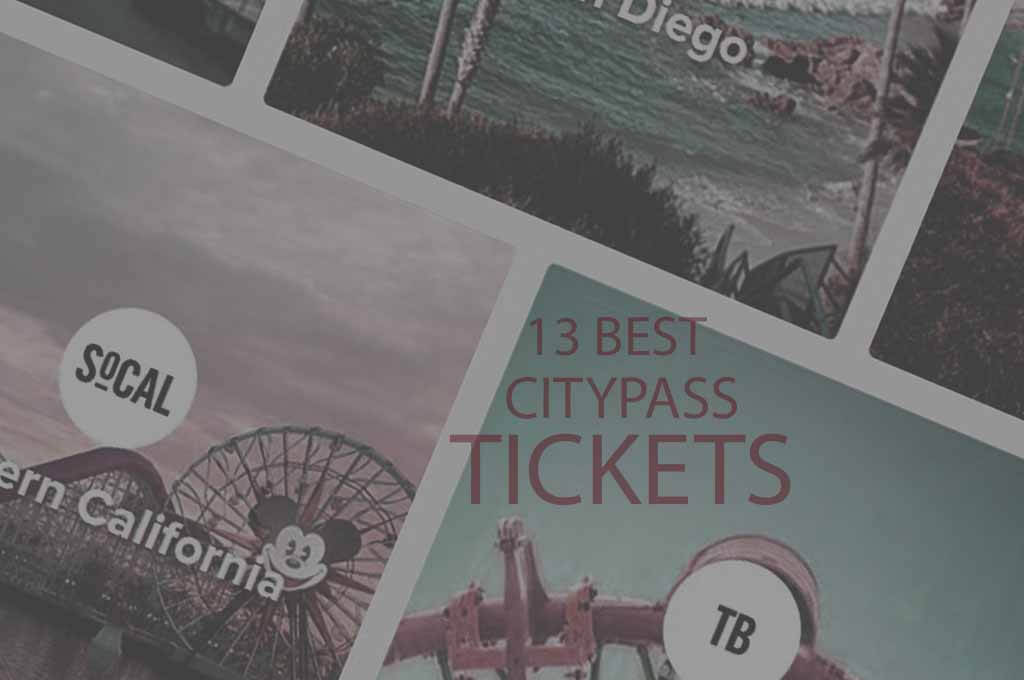 Many travelers agree CityPASS has made their trips so much easier. Whether it’s the chance to save up money (up to 55%!) or that you can enter some of the top attractions with just one ticket, CityPASS tickets are more than worth it.

The best part about these tickets is that they are valid for one year so that you can plan your trip way ahead. But please note that once you use it by visiting one attraction, it’s only valid for 9 (nine) consecutive days. Among all CityPASS attractions offered, we’ve handpicked the top 13 that are either bestsellers or come at the best deal. Let’s take a look!

Two of Boston’s must-visits are included in this pass: New England Aquarium and the Museum of Science. You also get to pick two more for the available three: Boston Harbor City Cruises, Franklin Park Zoo, and Harvard Museum of Natural History. If you’re still unsure which ones to visit, you can pick later after the purchase.

Get admission to all four attractions at 47% cheaper than purchasing them at the counter! For children aged 3-11, you get an extra discount with this Boston CityPASS. And those under 3 are eligible for free entrance to some of these CityPASS attractions.

What makes this pass an excellent value is that each pass includes admission to Perot Museum of Nature and Science, Reunion Tower GeO-Deck, and plus two others of your choice. The choices are the Sixth Floor Museum at Dealey Plaza, Dallas Zoo, and George W. Bush Presidential Library & Museum. Can’t decide which one to visit? No worries. You can pick later!

Get admission to all four of Dallas’ top attractions at 46% cheaper than purchasing them separately at the attraction’s ticket counter. For children aged 4-12, you get an extra discount. And those under 4 are eligible for free entrance to some of these Dallas CityPASS attractions.

Covering five of the top things to do in Chicago, this pass is an excellent purchase. The best part? You can save 50% of what you usually would pay. The Chicago CityPASS includes admission to the Shedd Aquarium, Skydeck Chicago, Field Museum, and two others you can choose from the available three options.

But that’s not it. As some of the best CityPASS tickets, you’ll see on this list, there’s another deal you can choose from: the C3 ticket. This option is best for a shorter stay. It lets you save up to 34% on admissions to three of Chicago’s main five CityPASS attractions.

This pass is one of the best-selling CityPASS tickets. With over 6,000 reviews online, it’s safe to say that thousands of people cannot say no to its super deal: 46% smart saving! What makes it a great value is that each pass includes three of Atlanta’s main attractions (the Aquarium, World of Coca-Cola, and the Zoo) plus two others of your choice.

The Fernbank Museum of Natural History, College Football Hall of Fame, and National Center for Civil and Human Rights are among the selections included in this Atlanta CityPASS. Can’t decide which one to visit? No worries. You can pick later!

Save up to 40% when purchasing this San Diego CityPASS. There are three ticket packages available as your option. Each one includes SeaWorld San Diego or LEGOLAND California or both, plus three other CityPASS attractions of your choice! The third option, which allows you to enter both SeaWorld and LEGOLAND, offers the biggest discount. And children aged 3-12 get even better deals!

Two of Seattle’s must-visits are included in this pass: Space Needle and Seattle Aquarium. You also get to choose three more for the available four: Argosy Cruises Harbor Tour, MoPOP, Woodland Park Zoo, and Chihuly Garden and Glass. If you’re still unsure which ones to visit, you can pick later after the purchase.

Get admission to all five attractions at 47% cheaper than purchasing them separately. For children aged 5-12, you get an extra discount. And those under 5 are eligible for free entrance to some of these Seattle CityPASS attractions.

Covering five of Houston’s top things to do, this pass is an excellent purchase. The best part? You can save 47% compared to purchasing them separately. The Houston CityPASS includes admission to the Space Center Houston, Downton Aquarium, Museum of Natural Science, and two others you can choose from the available four options.

The pass is valid for 9 (nine) consecutive days, starting with the first day you visit one of the attractions. But from the date of purchase, you have one year to use it. So, go ahead and purchase one now, even if you’re not sure when you can visit Houston.

Besides the chance to save up, CityPass also offers you more great deals. For this New York CityPASS, for example, you have two options. The first deal lets you save 42% on a 6-attraction bundle. It includes tickets to the Empire State Building, the American Museum of Natural History, the Metropolitan Museum of Art, and three other attractions of your choice. Definitely the best pass for those who live to tick the top things to do on the New York checklist!

The other deal lets you save up to 36%, the New York C3. You can choose three among the available attractions with this pass, making it an excellent option for a shorter stay.

Though Tampa Bay is not the go-to destination in Florida, the bundle of CityPASS tickets is one of the best as it offers 55% saving. That’s right, more than half! What’s more, the bundle includes five of Tampa Bay’s top attractions. It should come as no surprise that it’s also the best-selling one on CityPASS for this region.

Each purchase of Tampa Bay CityPASS includes admission to Busch Gardens, the Aquarium, Marine Aquarium, ZooTampa, and a choice between the Museum of Science & Industry and one of the two available tours. Better yet, toddlers under 2 may enter for free!

Explore Toronto’s top things to do with just one purchase of CityPASS tickets. Not only does it save your research time, but this pass also lets you save 40% than the tickets’ original price if you purchase them together. No kidding!

The Toronto CityPASS is valid for 9 (nine) consecutive days, starting with the first day you visit one of the attractions. But from the date of purchase, you have one year to use it. So, go ahead and purchase one now, even if you’re not sure when you can visit Toronto.

Buy your CityPASS tickets separately with Orlando CityPASS. Though it only includes four CityPASS attractions, it’s still one of the best options out there for the amount of money you save. Besides, these four attractions are among the top things to do in Orlando.

“We purchased 2 city pass tickets to legoland. 74 dollars instead of 99 a piece. Cant pass that up”

Most attractions come in two purchase options: Base Ticket only or Park-to-Park. You can have the exact dates or make your tickets flexible to visit anytime. There’s also a special offer if you plan on visiting three of the Universal Orlando Resort’s parks.

CityPASS offers you two great deals that include some bestselling San Francisco CityPASS tickets. The first deal lets you save 45% of a 4-attraction bundle. It includes tickets to California Academi of Sciences, Blue & Gold leet San Francisco Bay Cruise, and two other attractions of your choice. Definitely the best CityPASS in San Francisco for those who live to tick the top things to do on the San Francisco checklist!

“We bought the CityPASS and used it dedicated attractions. All transportation such as Cables, Bus.. It was really convenient and amazing attractions I have been to. I recommend the CityPASS in San Francisco.!!”

The other deal lets you save up to 37%, the San Francisco C3. With this pass, you can choose three among the available CityPASS attractions in San Francisco.

Last but definitely not least in our list of the best CityPASS tickets is the South California CityPASS. Not only does it provide you the chance to spend less, but it also offers more experience and attractions. This pass includes tickets to the two magical theme parks of Disneyland and a full day of rides and shows in the Universal Studios Hollywood, where The Wizarding World of Harry Potter is. All aboard the 9¾ platform!

“It was easy and fast. I bought the Legoland tickets and was happy I did. And I had the best ticket prices for four. I was also satisfied with the chats I had with a rep who answered all my concerns. I will for sure use the City PASS on my next trip.”

Let’s not exclude the fun at SeaWorld San Diego and California Resort’s Legoland. Yep, both are also available with the purchase of South California CityPASS. As icing on the cake, you get to choose not only one but two of San Diego’s zoological parks. With this pass, you have unlimited access to the guided bus tour and Skyfari Aerial Tram. All shows and exhibits too!

Is a CityPASS worth it?

Definitely! Bundling admissions to each destination’s top attractions at a lower price makes CityPASS tickets worth every penny. It saves you from researching the places to visit, contacting each attraction, purchasing each admission, all with the best deal of discount.

How long is the Atlanta CityPASS good for?

Like most CityPASS tickets, Atlanta CityPASS is valid for 9 (nine) consecutive days, starting with visiting one of the attractions. But from the date of purchase, you have one year to use it. So, go ahead and purchase one now, even if you’re not sure when you can visit Atlanta.

How does Dallas CityPASS work?

Use the pass to enter four of Dallas’s main attractions. As simple as that! Note that one attraction’s policy is different from another. You may use the pass as a ticket to use all facilities in one, but only for admission for another. CityPASS website explains this in detail for each destination.