Top 12 Things To Do In Arequipa 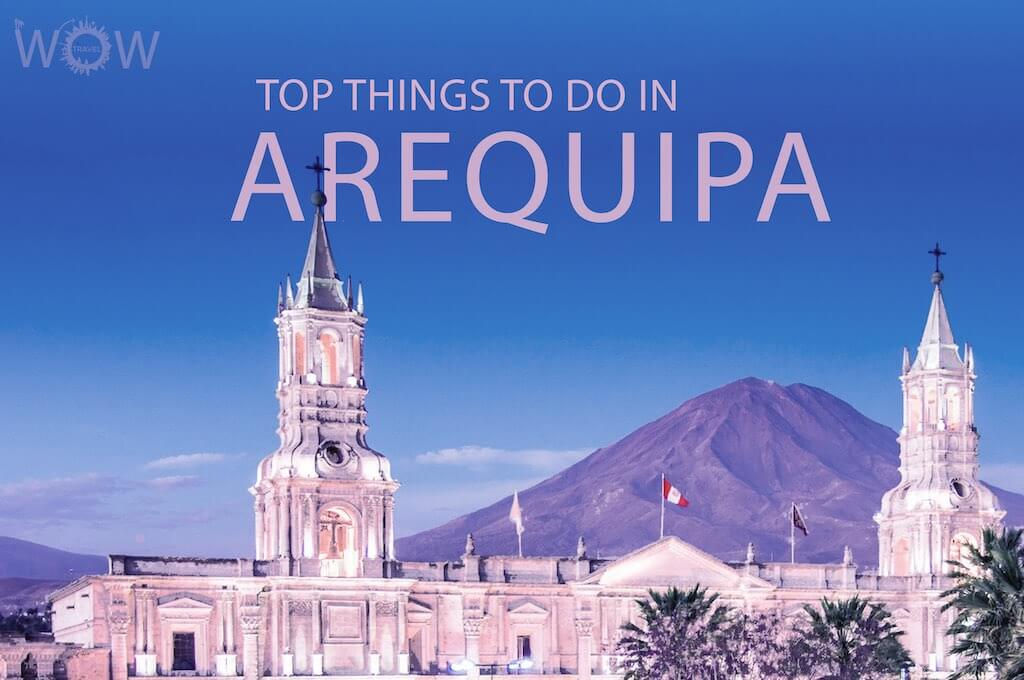 Arequipa, the second-largest city in Peru after Lima, has earned the sobriquet of the ‘legal capital of Peru’ since it is the seat of the Constitutional Court of Peru. It is also part of the Southern Peru Tourist Corridor along with Cusco, Puno, and Nazca. The city which was founded in 1540, has maintained a lot of its historical charm, especially in its historical center which covers an extensive area of 332 hectares. Out of the 5817 properties in this UNESCO World Cultural Heritage site, there are 500 which are listed. Most of these buildings have been built using the volcanic stone, ashlar, giving this area of the city a white look and giving it the nickname, White City. Besides the historic buildings in the city that are worth exploring, the surroundings are a photographer’s delight too with three dramatic volcanoes looking over the city.
[booking_product_helper shortname=”arequipa”]

The 17th-century Basilica Cathedral of Arequipa towers impressively over the Plaza de Armas. The stark white cathedral made from volcanic rock has the distinction of being the only cathedral in Peru that stretches the length of a plaza. Although the church stands tall today, it has suffered from natural disasters right from its inception. The original cathedral was built in the 16th century but was reduced to rubble by an earthquake a few decades later. It was rebuilt in 1600 but was severely damaged just before completion by the eruption of the Huaynaputina stratovolcano. Whatever of the structure survived the earthquake was once again completely destroyed by another earthquake four years later. The church was rebuilt and subsequently suffered damage from some more earthquakes and a fire in 1844.

This is one of the historical sites in Arequipa that should definitely make it to your itinerary. Built by a rich widow, Dona Maria de Guzman in 1580, this impressive convent is a town within the town, complete with street names and a square. There are three cloisters within the 20,000 square meter complex, the Novice Cloister for the novices who spent four years of their lives here, the Orange Cloister named after the orange trees that were a symbol of renewal and eternal life, and the Great Cloister. A good idea is to use the services of a guide to get a better understanding of what life in the convent was like.

This 18th century ancestral home is one of the best well-preserved examples of Andean baroque civil architecture. Deriving its name from the 200-year-old mulberry tree which stands prominently in its central courtyard, the museum that is Casa del Moral is an interesting visit. The museum is noted for its furniture, religious art, and antique maps. It also has an extensive collection of coins and banknotes of Peru.

Church of the Company of Jesus

On the opposite corner of the plaza from the cathedral is the more modest Jesuit church, Iglesia de la Compania. Construction on the church began in 1590 but was only completed a century later in 1699. Like most of the buildings in the vicinity, the church is also built from volcanic rock. The intricately carved masterpiece on its facade is a beautiful example of the ‘churrigueresque style’ of architecture which emerged in the 1660s in Spain. The detailed altar too bears a close resemblance to the Seville cathedral in Spain. Noteworthy too is the painting of the Virgin with the Child by Italian painter, Bernando Bitti.

A visit to the Plaza de Armas is like a step back in time. Unspoiled by modernity, the park is surrounded by the most prominent buildings of the historic center which showcase ‘sillar’ architecture. On one side of the plaza is the massive cathedral and the other three sides are flanked by spectacular colonnaded balconies. The plaza is a popular spot for locals and visitors. It also offers beautiful views of the snowcapped Misti and Chanchani.

The majestic volcano sitting at a height of 5,825m, forms the perfect backdrop to the White City of Arequipa. El Misti is one of the most iconic sights visible from almost anywhere in the city although it is about an hour’s drive away. The more adventurous can choose to go on the two-day hike to the top to avail of some spectacular views. Hiking to the top is not easy at all as it is a constant upward climb and is done with just about four hours of sleep. If you do plan to do the hike then it is highly recommended to take along ski poles for your additional safety and acclimatize yourself well to avoid altitude sickness. However, a day hike in and around the Misti foothills is also possible for those wanting an easier climb.

It’s a pleasant walk to this tranquil neighborhood from the Puente Grau. The mirador (lookout) with poetry inscribed arches, in the neighborhood of Yanahuara, is one of the most popular spots to visit. The lookout offers some spectacular views of the city and the volcano Misti. A leafy plaza surrounded by a beautiful blend of colonial churches and stylish archways is extremely popular with visitors.

Don’t expect a big spectacular museum when you get here or you’ll be sorely disappointed. The Museo Santuarios Andinos is a small museum which has one of the most prized exhibits in Peru, that of the ‘Ice Maiden,’ a 12-year-old Inca girl named Juanita. She was sacrificed to the gods in 1450 and is now preserved in a glass refrigerator. Before you finally get to see the frozen mummy that was unearthed from the top of Nevado Ampato, a guided tour will fill you in on all the details of the discovery.  The mummy is not displayed between January to April as it is placed in a deep freeze for conservation.

One of the most beautiful natural wonders in all of Peru is the Colca Canyon. The canyon is the second deepest canyon in the world, behind China‘s Tsangpo Canyon and is twice the depth of the Grand Canyon in the United States. The one day tour from Arequipa will take you to the best lookout points around the canyon but if you want a true feel of its depth, do the two-day hike. Hiking down to the canyon is pretty easy but the hike back to the top is quite difficult. However, there is an option of riding a horse in and out of the canyon. Besides the spectacular scenery, one of the highlights of visiting the canyon would be to spot an Andean condor.

The historic Sabandia flour mill which was built in the late 18th century is set in the old Arequipa countryside, 9km southeast of the Plaza de Armas. It was the first of its kind, built from the famous white volcanic stone (sillar). Powered by a beautiful cascade of water and surrounded by hundred-year-old trees, the restored mill is a popular spot for picnickers. There is an extensive variety of succulents and cacti at the mill, which is also home to a variety of local animals including an immense Arequipa fighting bull.

Aguada Blanca National Reserve – About 2 hours away from the city is the Aguada Blanca National Reserve, an impressive landscape of fanciful rock formations, rivers, volcanoes and salt flats. The national park which is spread over 366,936 hectares is home to many indigenous species like vicunas, alpacas, and llamas. The Lake Salinas located within the reserve is also a beautiful spot to visit with its breathtaking scenery and flamingoes.

Located in the village of Huasacache, 9km from the city center, the 17th-century mansion was once owned by Garci Manuel de Carbajal, the founder of Arequipa. The mansion has been restored with its original furnishings and paintings. It even has its own chapel.