Top 12 Things To Do In Edirne 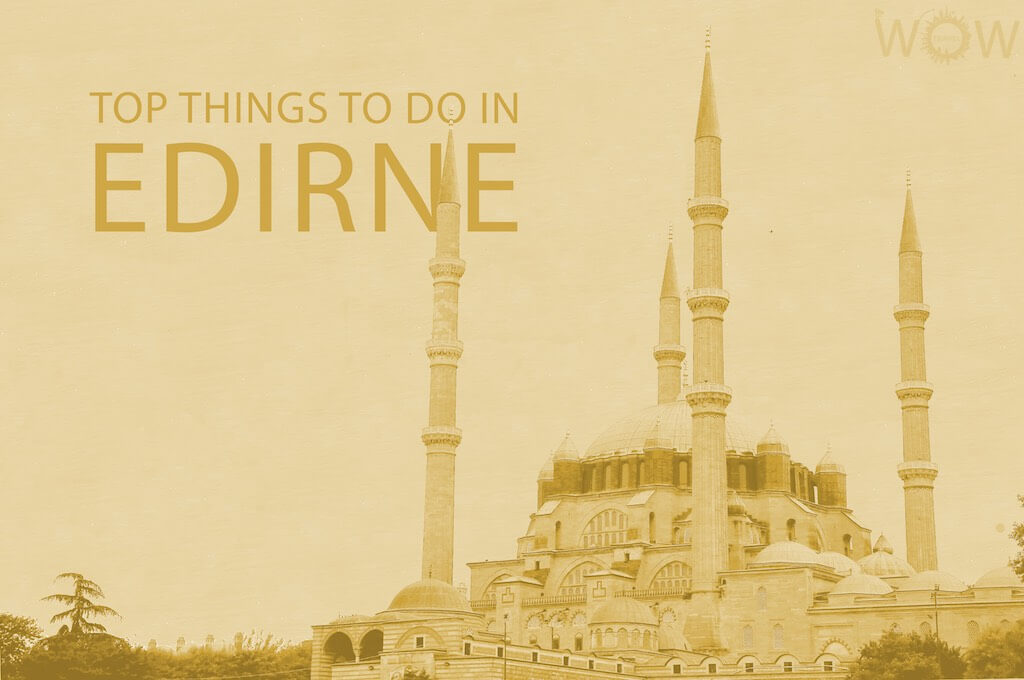 The city of Edirne, or Odrin as it was historically known, was the third capital city of the Ottoman Empire and the site of numerous sieges and battles. In fact, Edirne has the dubious distinction of being the most frequently contested place on the globe. The Ottoman influence on the city is evident in the beautiful historic buildings that form prominent landmarks. Edirne is renowned for its minarets, mosques, and domes. The city which is located in the northwestern province of Turkey close to the border of Greece and Bulgaria has an interesting amalgamation of cultures in food and habits. The European flavor of the city comes to the fore in summer when the banks of the Tunca and Meric Rivers become venues for the locals to party as they cheer on contestants in the oil-wrestling festival, Kirpinar.

The World Heritage-listed Selmiye Mosque, constructed at Edirne’s highest point, is one of the most outstanding and cherished landmarks of the city. Built between 1568 and 1575 by the imperial architect Mimar Sinan, the mosque is considered to be one of his masterpieces. There is no denying the beauty of this incredible structure, especially the domed ceiling which is covered in intricate calligraphy. In 1913, during the Bulgarian siege of Edirne, the dome suffered some minor damages when it was hit by Bulgarian artillery. On the orders of Mustafa Kemal Pasha, the dome was not repaired to serve as a warning to future generations.

In order to travel from Edirne to the district of Karaağaç which is southwest of the city, two rivers the Maritsa and Tunca need to be crossed. Two bridges built across these two rivers, the Ekmekçizade Ahmet Pasha Bridge (Tunca Bridge) and the New Bridge (Meric Bridge) are of historical significance. The Tunca Bridge was built between 1608 and 1615 by Sedefkar Mehmed Aga, an architect from present-day Albania, who was an assistant to Mimar Sinan. The bridge is considered to be one of the most beautiful in Edirne. Further ahead is the New Bridge, which isn’t as new as the name indicates but is the latest of the Ottoman bridges, which was built in 1847. The bridge is a great place to capture a beautiful sunset.

The Great Fire of Edirne in 1905 resulted in the destruction of several synagogues in the city, leaving the twenty thousand strong Sephardic Jewish community with no place to worship. With permission from the Ottoman Government and on the edict of Sultan Abdul Hamid II, a new synagogue was built at the site of the ruined synagogues. The Grand Synagogue designed by Frech architect France Depre was the third-largest in Europe and the largest in Turkey when it opened in 1909. The mass exodus of Jews from the city in the early 1980s led to its closure and subsequent ruin until it came under the control of the government’s Turkish Foundations Institution in 1995. The synagogue was restored and reopened in 2015 with a celebration and prayer service. Ironically the opening prayer service was overseen by the same Rabbi who had led the service on the day the synagogue closed 36 years before!

Edirne’s historical center is embellished by three beautiful mosques; two which dominate the skyline of the region, the Üç Şerefeli Mosque, and the Selmiye Mosque. The Üç Şerefeli Mosque which has four minarets of various heights in the four corners of the courtyard derives its name from the three balconies on the tallest minaret. It was built between 1438 and 1447, during the reign of Ottoman Sultan Murad II. A fire in 1732 and an earthquake in 1748 resulted in severe damages to the mosque which were later repaired under the orders of Mahmut I. Another major renovation was carried out in 1930 and restoration of the frescoes was done in 1999.

Previously known as the New Imperial Palace, the Edirne Palace was the palace of the sultans of the Ottoman Empire when the city was the capital. Construction of the palace began in 1450 and expansion of its grounds with new buildings continued with subsequent sultans. The palace complex eventually had 72 different buildings with the Cihannuma Kasri (Panoramic Pavilion) as the main building. An earthquake in 1752 and fire in 1776 caused significant damage to the complex but irreparable damage was done during the Russo-Turkish War. The only part of the palace to remain intact was the Justice Pavilion. Many of the palace buildings like the Imperial Kitchen and Sand Pavilion Bathhouse have since been restored by the National Palaces Administration.

The health museum of Trakya University is housed within the Complex (kulliye) of Sultan Beyazit II, located on the banks of the Tunca River. The hospital that was originally a part of the complex was renowned for its holistic treatment of mental disorders. It functioned for four centuries until the Russo-Turkish War between 1877-1878. In 1993, the historic medical center became a part of the Trakya University and was subsequently converted into a health museum, which is the second most visited site in Edirne.

The Janissary Gravestones are a part of the Selmiye Mosque museum. They are not actual graves but a display of various gravestones of Janissaries collected from Edirne’s numerous cemeteries. Most of the gravestones of the Jannisary troops were destroyed during the mutiny against Sultan Mahmud II, so the ones on display at the museum are quite rare. The Janissaries were soldiers who were handpicked to serve in the sultan’s personal army. Many of them were young Christian boys who were forced to convert to Islam and serve the state. One of the most notable Janissaries was Mimar Sinan, the great architect.

Church of Sts. Constantine and Helen

Built in 1869, the Bulgarian Orthodox church is a good example of Eastern Orthodox church architecture. It has a three-nave pseudo basilica and a single pitched roof above all three naves. The original church was built in less than seven months but had fallen into neglect as it was abandoned when the Bulgarians were exiled from Thrace after the Second Balkan War in 1913. A restoration project carried out with partial funding from the Bulgarian government was completed in 2008. During the restoration, several historical inscriptions were discovered which have now been incorporated into the church. Although the church is not open to the public, you can request the caretaker to allow you to visit.

Kaleici, the old city of Edirne is a poignant reminder of a bygone era. The old streets south of Talat Pasa Caddesi and west of Saraclar Caddesi date from the medieval period. A large number of ornately decorated timber houses that date back to the 18th, 19th and 20th centuries can be seen here. Although time has not been kind to many of the traditional houses, which are in a sad state of disrepair, a few of them like the beautiful Mihran Hanim Konagi and the Great Synagogue have been restored.

Edirne was once a part of the Roman empire, refounded by Emperor Hadrian who made it the capital of the Roman province of Thrace. Evidence of its Roman past can be seen in the walls of the ruins of the Roman fortress which are a part of a small archaeological park in the heart of the city. The first line of the fortifications called Hadrian’s Walls was built during the Roman era but the second line of fortifications are from the Byzantine period. One of the bastions, the Macedonian Tower stands prominently amidst the remains of the fortifications. In 1884 a wooden Clock Tower was constructed on the bastion on the orders of the governor. The original clock that adorned the tower was brought to the city from France but was replaced two years later.

The Old Mosque of Edirne is not as prominently visible from a distance like the other two grand mosques in the region, but it is not one to be dismissed. This is the oldest of the city’s imperial mosques, built between 1403 and 1414, and has a large local congregation. Unlike the other mosques, the extensive complex that it once had is no longer visible, only the covered bazaar remains. The mosque was originally built with a single minaret but the second taller minaret was added by Sultan Murad II. The large calligraphy works inside the mosque are quite notable.

One of the highlights of visiting a city so rich in history is to be able to sample the wares of the traditional, covered bazaar. Ali Pasha Bazaar is just one of the three traditional bazaars in the city. It was built between 1568 and 1569 by Edirne’s most loved architect, Mimar Sinan and named after the Grand Vizier Hersekzade Semi Ali Pasha, who died four years before the bazaar was erected. There are about 130 shops on both sides of the covered street selling everything from souvenirs and shoes to household items. Located along Saraclar Street, you can enter the bazaar from any of the six gates.