The 10 Most Impressive Walled Cities 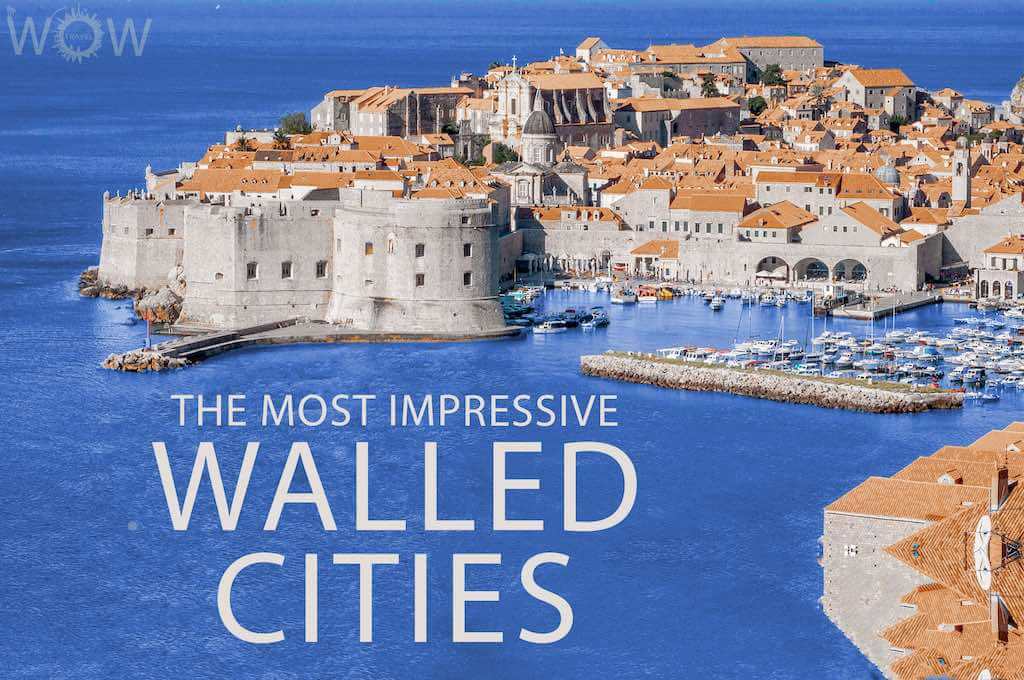 Defensive walls were built over the centuries to protect a city or settlement from potential aggressors. Beyond their defensive utility, many walls also had important symbolic functions, representing the status and independence of the communities they embraced. Nowadays these walls are UNESCO monuments visited by millions of people. These walls are silent witnesses of glorious pasts and wonderful stories. WOW Travel invites you to explore the 10 Most Impressive Walled Cities.

Toledo is one of the former capitals of the Spanish Empire. The history of Toledo dates back to Roman times. Roman occupation was followed by Visigothic rule, Muslim rule and finally the Reconquista of Toledo in 1085 AD. It was the capital of the Spanish empire until the mid-1500’s when the royal court moved to Madrid. The city is surrounded by the River Tajo on three sides and two medieval walls on the fourth side. Planning to visit? Always pick one of the 11 Best Hotels in Toledo for the best experience!

Ping Yao is an exceptionally well-preserved example of a traditional Han Chinese city, founded in the 14th century. Its urban fabric shows the evolution of architectural styles and town planning in Imperial China over five centuries. Of special interest are the imposing buildings associated with banking, for which Ping Yao was the major centre for the whole of China in the 19th and early 20th centuries.

Québec was founded by the French explorer Champlain in the early 17th century. It is the only North American city to have preserved its ramparts, together with the numerous bastions, gates and defensive works which still surround Old Québec. The Upper Town, built on the cliff, has remained the religious and administrative centre, with its churches, convents and other monuments like the Dauphine Redoubt, the Citadel and Château Frontenac. Together with the Lower Town and its ancient districts, it forms an urban ensemble which is one of the best examples of a fortified colonial city.

Ávila is a medieval city in the province of Castile-Léon in western Spain, about 70 miles northwest of Madrid. Founded in the 11th century to protect the Spanish territories from the Moors, Ávila has a magnificently well-preserved city wall, a historic cathedral, a number of Romanesque churches, and an authentic medieval atmosphere. For all these reasons, the entire Old Town of Ávila has been designated a World Heritage Site by UNESCO. For pilgrims, the city of Ávila is important because of its association with the great mystic and reformer St. Teresa de Jesus, better known as St. Teresa of Ávila.

A majestic, brown-walled city situated between Agadir and Ouarzazate. It is sometimes called the ‘Grandmother of Marrakech‘ as it seems to be a smaller, slower-paced version of Marrakech. The city is one of the most elegant in the country and you will see beautiful buildings and the stunning craftsmanship that adorns the city’s facades. Taroudant is perhaps most noted for its crafts – so if you plan to shop, this is the place to do it.

The best-preserved walled city around the Baltic Sea, Tallinn was once one of the best-fortified settlements in Europe. Out of the 66 towers that dotted its walls in medieval times, only 20 remain standing around what is now the Historic Center.

Most of the existing walls and fortifications surrounding the old center of the Adriatic port city of Dubrovnik were constructed during the 14th and 15th centuries, but parts were extended and strengthened even up to the 17th century. No hostile army ever breached them during the Middle Ages and while the earthquake of 1667 destroyed many buildings it left the walls largely unscathed. Walk the two-kilometer circuit of the walls for fantastic views of the sea and of the old city that lies within the walls, taking water and wearing hat and sunscreen as there’s precious little shade.

As you approach Carcassonne it looks like you are coming up on a giant fairy tale castle until you realize it is actually the large city wall. The impressive medieval wall easily makes this one of the best walled cities in the World and you’ll fall in love with Carcassonne as you start to explore. Walking along the Medieval wall and its towers is so much fun that you actually have to force in time to check out the city itself. Visiting Carcassonne is by far the best experience in Southern France’s Provence region. Plan your trip even better by booking your accommodation in advance. Check out our 11 Best Hotels in Carcassonne.

The town of Óbidos is located on a hill and is encircled by a fortified wall. In the 8th century the Moors established a fortification on top of the hill. It was taken from the Moors by the first King of Portugal, Afonso Henriques, in 1148. The castle of Óbidos and the walls of the village were remodeled in the 14th century. The walls are made out of local limestone and marble. The village was also enlarged around this time, with settlements created outside the city walls. The well-preserved mediaeval look of its streets, squares, walls and its massive castle have turned the picturesque village into a popular tourist attraction in Portugal.

Jerusalem is a holy city to three religions, Judaism, Christianity, and Islam, whilst being the modern capital of the State of Israel and the country’s largest city. It is a fascinatingly unique place where the first century rubs shoulders with the twenty-first century, and where picturesque old neighborhoods nestle against glistening office towers and high-rise apartments. The walled city of Jerusalem, which until the late nineteenth century formed the entire city, is now called the Old City. It is divided into four quarters: The Armenian, Christian, Jewish, and Muslim Quarters. Jerusalem has been surrounded by walls for its defense since ancient times. In the 16th century, during the reign of the Ottoman empire in the region, it was decided to fully rebuild the city walls on the remains of the ancient walls. The construction lasted from 1535-1538 and these walls are the walls that exist today.

Sometimes walls exist just to see who has the strength and adventurous spirit to go behind them and discover what is within.