15 Most Famous Domes In The World 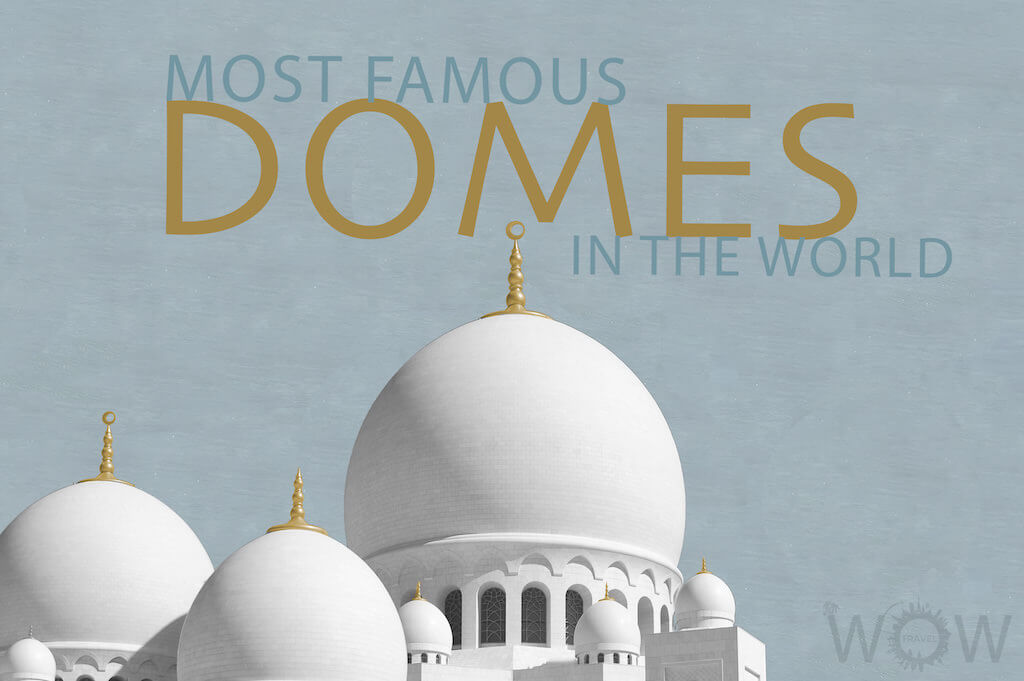 A dome is an architectural element that resembles the hollow upper half of a sphere. The use of domes on different places is quite old and sometimes this is considered as a sign of tradition of any nation. It was the Romans who first fully realized the architectural potentialities of the dome. The Roman development in dome construction culminated in the Pantheon. The Romans, however, failed to discover a proper handling of the pendentive, the device essential to placing a dome over a square compartment – that was finally achieved by the Byzantine builders of Hagia Sophia at Constantinople. Nowadays domes are still used for decorating temples, churches, mosques, monuments and even government buildings. Enjoy our list of the 15 Most Famous Domes In The World.

Sits atop Capitol Hill, at the eastern end of the National Mall. The United States Capitol is among the most symbolically important and architecturally impressive buildings in the nation. It has housed the meeting chambers of the House of Representatives and the Senate for two centuries. The dome of the Capitol building was not added until the 1850’s. It took a total of 11 years to put the dome on top of the building. Some of the 11 Best Hotels in Washington DC offer the best view of this legendary dome!

Dome Of The Rock, Jerusalem

Built in the seventh century, the Dome of the Rock is an impressive, iconic, gold-topped shrine located on the Temple Mount in the Old City and the most famous Islamic site in Jerusalem. It was initially completed in 691 CE at the order of Umayyad Caliph Abd al-Malik during the Second Fitna. The Dome of the Rock is the oldest surviving example of Islamic architecture, and long praised for the breath-taking beauty of its golden dome.

Standing majestically on the banks of River Yamuna, the Taj Mahal is an immense mausoleum of white marbles and synonymous to love and romance. It reigns supreme as one of the most recognizable and iconic images of India. Its delicate minarets, gracefully curved archways and ice cream scoop domes have led many to make the pilgrimage stand at its entrance and wonder at its grandeur.

Built by Emperor Justinian in 537, the Hagia Sophia is a former Greek Orthodox patriarchal basilica that was the world’s greatest cathedral for more than 9 centuries, later an imperial mosque when the Turks took the city in 1453, and now a museum after it was converted into a museum in 1935. It is mostly the dome which makes Hagia Sophia world famous. Hagia Sophia dome sits at the center of the church. The dome is built by brick and mortar and it is 33 meters (108 ft) in diameter.

Sanchi is the most important Buddhist sanctuary in India. The site comprises palaces, temples, monolithic pillars and monasteries. Upon them the great stupa is the most popular monument at Sanchi. It is also the oldest stone structure in India date back to 3rd century B.C.E. The monuments of UNESCO also recognized by UNESCO as a word heritage site in 1989. The great stupa is a large hemispherical dome that contain relics of lord Buddha in the center chamber. Source: themysteriousworld

The Basilica di Santa Maria del Fiore is not only Florence’s religious center, it is also the city’s most recognizable attraction and the world’s largest masonry dome. Occupying the Piazza del Duomo in the heart of the city. This massive Gothic cathedral was built in the late Roman times between 4th and 5th century A.D. The magnificent dome was built by Filippo Brunelleschi while the campanile was partly designed by the great artist Giotto during the 14th century on the former site of the Roman church, Santa Reparate.

St. Peter’s Basilica in Rome is an amazing feat of architecture and art and one of the most beautiful buildings in Rome. It is the world’s largest Basilica of Christianity, nested into the heart of the Vatican city. The indigenous St Peter’s Basilica was constructed by will of Emperor Constantine around 320 AD. For about thousand years the Basilica grew and got enriched, but it was also theatre of pillage in the barbarian hordes. The cornerstone for this sanctified structure was laid on April 18, 1506.

St Paul’s is an architectural masterpiece and its dome a landmark of the London skyline. A cathedral has stood here since 604 AD with the present cathedral having been built between 1675-1710 after the Great Fire of London destroyed its predecessor in 1666.

The Reichstag is a fitting example of Berlin’s weird mix of the old and new: the original building was constructed in 1884 and fell into disrepair during the Second World War, before being restored after reunification with the addition of its ethereal and strikingly modern glass dome, designed by Sir Norman Foster.

The Shah Mosque (or Imam Mosque) in Isfahan, Iran is regarded as one of the masterpieces of Persian Architecture. The dome of the Shah Mosque is the tallest in Isfahan reaching a height of 53 meters (74 ft).

One of the most significant architectural ensembles of medieval East, Gur-e Amir Mausoleum was built in the southwestern part of Samarkand, Uzbekistan at the beginning of the 15th century. The Mausoleum is the place where the conqueror Timur and some member of his family were buried. The gorgeous blue dome is decorated with stars and white dots.

The Putra Mosque is the principal mosque of Putrajaya in Malaysia. Construction of the mosque began in 1997 and was completed two years later. The pink-domed Putra Mosque is constructed with rose-tinted granite and can accommodate 15,000 worshippers at any one time. The basement wall of the mosque resembles that of the King Hassan Mosque in Casablanca, Morocco.

The Hungarian Parliament stretches 268 meters (879 ft) in its length, along the Danube embankment. Ornamented with white neo-gothic turrets and arches, it forms the most outstanding landmark in Budapest. The unique interior design includes huge halls, over 20 km (12.5 miles) of corridors and 96 meter (315 ft) high central dome.

Abu Dhabi’s most iconic landmark is the Sheikh Zayed Grand Mosque, one of the world’s largest mosques, with a capacity for an astonishing 40,000 worshippers. It features 82 domes, over a 1,000 columns, 24 carat gold gilded chandeliers and the world’s largest hand knotted carpet. Built between 1996 and 2007, Greek and Italian white marble covers the exterior, while Islamic calligraphy decorates the inside.