The 12 Most Beautiful Places In Peru 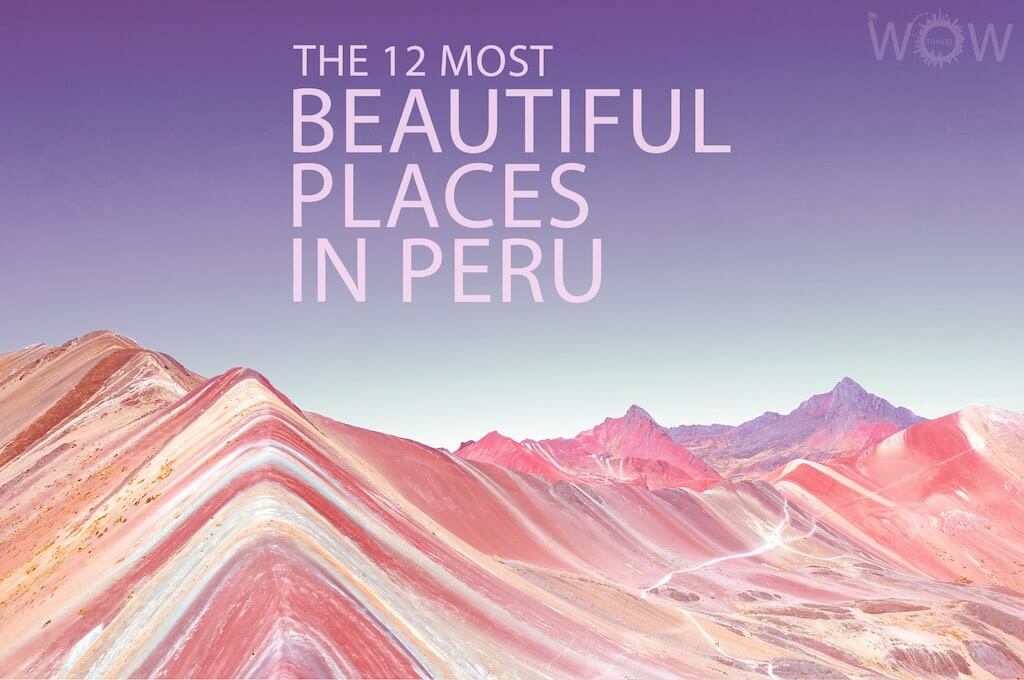 One of the most enigmatic countries of South America is Peru with its megadiverse landscapes combined with a rich ‘golden’ history. Its 5000-year history is showcased in the numerous archaeological sites that are scattered throughout the different parts of the country. From pre-Incan Geoglyphs of Nazca and remnants of Chan Chan, hoto the Incan sites of Machu Picchu and the temple of Korikancha, and the colonial centers of Lima, Arequipa, and Cusco, there is no dearth of stunning places and monuments to see in this part of the world. History aside, Peru also offers great photo ops with some spectacular natural sites. Festivals are intertwined with the culture of the land and being smack dab in the middle of the festivities is probably one of the best ways to experience the beauty and color of mythical Peru.

About 160km northwest of the beautiful city of Arequipa is Peru’s third most visited destination, the Colca Canyon. The second deepest canyon in the world after China‘s Tsangpo Canyon, this natural wonder is sure to take your breath away.  It’s easy to access the canyon from Arequipa and although there are day trips from the city, to truly experience the canyon the two-day hike is recommended. It’s not all that difficult getting down to the canyon but climbing back up can be quite tiring. However, horses are available for those that would prefer a ride. Apart from the breathtaking beauty of the landscape, the highlight of a trip here would be to spot the largest flying bird, the elusive Andean Condor.

The Historic Center of Peru’s second-largest city is a vision in white, dotted with baroque buildings carved from the white volcanic stone, ashlar. Arequipa is rightly acclaimed as one of the most beautiful cities of Peru, and has rightfully earned the nickname the ‘White City.’ It is part of the Southern Peru Tourist corridor along with Puno, Cusco, and Nazca. 500 properties in the historic center are listed as UNESCO World Cultural Heritage sites. Besides the beautiful historical center, the setting of the city amidst three dramatic volcanoes adds to its lure and attractiveness.

Social media is probably responsible for the increase in tourism in this area. When photos of the Rainbow Mountain or Vinicunca made their way onto the social networking sites, the destination became all the rage and made it to the bucket list of many. Situated at an elevation of 5,200m the mountains can be accessed from Cusco or Pitumarca. It’s about a two and a half-hour drive from Cusco plus an additional five-kilometer walk to reach the site, whereas it takes about three and a half hours from Pitumarca and an additional 45 minute walk uphill. The mineral compositions of the rocks that form the mountains are responsible for the vivid colors. The best time to visit is in the month of August as the colors are highlighted during the dry season.

Not very far from the city of Huaraz is the stunning Lake 69, sitting at an altitude of over 4500m. Huaraz is a famous destination for adventure seekers and one of its star attractions is Lake 69; not just because it’s a gorgeous sight, but also because it is a relatively easier hike to most other trails in Peru. During spring when the ice thaws, the lake is fed by a small waterfall that flows down the mountain. Since there was no local or traditional name for the lake, it was given a number when the authorities were listing all of the lakes that were part of the Huascaran National Park. The hiking route runs along a brook that forms several waterfalls and cataracts and has some amazing scenery.

On a limestone ridge perched at an elevation of 3000 meters and overlooking the Utcubamba Valley is the attractive walled settlement of Kuelap. The site was inhabited by humans in the 5th century AD but most of the structures date back to 900 and 1100 AD. During the Spanish conquest, the city was abandoned and gradually fell into ruin and eventually covered by the roots of trees. It was accidentally rediscovered by a judge from the city of Chachapoyas in 1843. Three deep narrow gates which are designed like funnels served as the entrances to the fortress. This forced enemies to attack in single files ensuring an easy win for the fortress. Remnants of circular dwellings are scattered throughout the center of the fort but the most impressive structure is the large inverted cone-shaped structure named the Templo Mayor.

A trip to Peru would be incomplete without a visit to one of the seven wonders of the world, the Inca city of Machu Picchu. This ancient Peruvian city is probably one of the most photographed archaeological sites in the world because of its stunning location. The exact purpose of the city still remains a mystery but its proximity to the Inca capital Cusco may have some significance. Mercifully the Spanish did not discover this ancient city and so it escaped plunder and destruction. Machu Picchu which was built without the use of metal tools, mortar or the wheel is a true marvel of engineering. Indeed, Machu Picchu is The Incan Big Apple.

One of the most enigmatic sites on the gorgeous Lake Titicaca are the floating islands of the indigenous Uros people near Puno. What is so amazing about these islands is that they have been created from the buoyant totora reeds that grow in abundance in the shallow parts of the lake. Several layers of the reeds have been interwoven to create these islands. The top layers are replenished regularly to substitute the ones which rot at the bottom. The island settlements were initially built for defense as they could be moved easily if there was any danger. A watchtower is still located on the biggest island. The Uros people live on both sides of the lake, near Bolivia and Peru.

The largest adobe city in the world which was built around 1300 AD is the pre-Columbian city of Chan Chan located 5kms west of the city of Trujillo. During its heydey, Chan Chan covering 20sq km was the largest city in South America and the ancient capital of the historical Chimor empire. Comprising of nine royal compounds, gardens, palaces, aqueducts and boulevards, the city must have been quite amazing at the time. It once contained a vast amount of gold which was looted when the Spaniards conquered the Incas who had taken over the city from the Chimor. Today much of the city’s outer portions have been eroded by heavy rainfall and devastating El Nino floods but the impressive restored Palacio Nik An complex is quite a sight.

For those looking for a different kind of scenery, head to the oasis resort of Huacachina on the outskirts of Ica. Surrounded by huge sand dunes, some as high as 1,000 meters, and fringed by palm trees, the scenic Huacachina oasis is a popular stopover on the Gringo Trail. Local legend has it that the lake has therapeutic powers and visitors often get into the water in the hope of being cured of ailments like asthmas, bronchitis, and arthritis.

One of the tallest waterfalls in the world which plummet 771 meters was hidden from civilization until 2005 when German economist Stefan Ziemeddorff stumbled upon it. While on a hike in search of Pre-Incan ruins in the Utcabamba valley, Ziemendorf came across this two-tiered waterfall which hadn’t been mapped before. These amazing waterfalls became the subject of controversy when they were hailed as the third tallest in the world since they are a combination of two tiers and not one cascade. Both the upper and lower falls are accessible through trails and signposts.

A prime destination for exploring Inca ruins is the beautiful Sacred Valley located between Cusco and Machu Picchu. Several stunning locations like the ancient site of Moray with its agricultural amphitheater, the Pisac Ruins, the mystical town of Ollantaytambo, and the salt mines of Maras are just some of the many sites that make up this mystical valley. Apart from the ancient Inca ruins, visitors can also enjoy a leisurely stroll through the famed markets of Pisac or spend some time in the area soaking up the local culture.

These enormous Geoglyphs etched into the Nazca desert in southern Peru, stretching over 500 square kilometers, have long been a mystery. How they were made and for what reason has baffled researchers for years. The fact that they can only be viewed from the air or from the top of a high hill, makes them even more intriguing. Created by the pre-Inca people between the 500 B.C and 500 A.D, there are over 800 straight lines, 70 drawings of animals and plants, and 300 geometric figures. By removing the dark sun-baked stones from the desert surface and piling them up on either side of the lines to expose the lighter soil below, these images and lines were created. Several theories regarding the lines have been put forward by archaeologists but with no real conclusion as to why they were made.