15 Common Tourist Scams You Should Know About 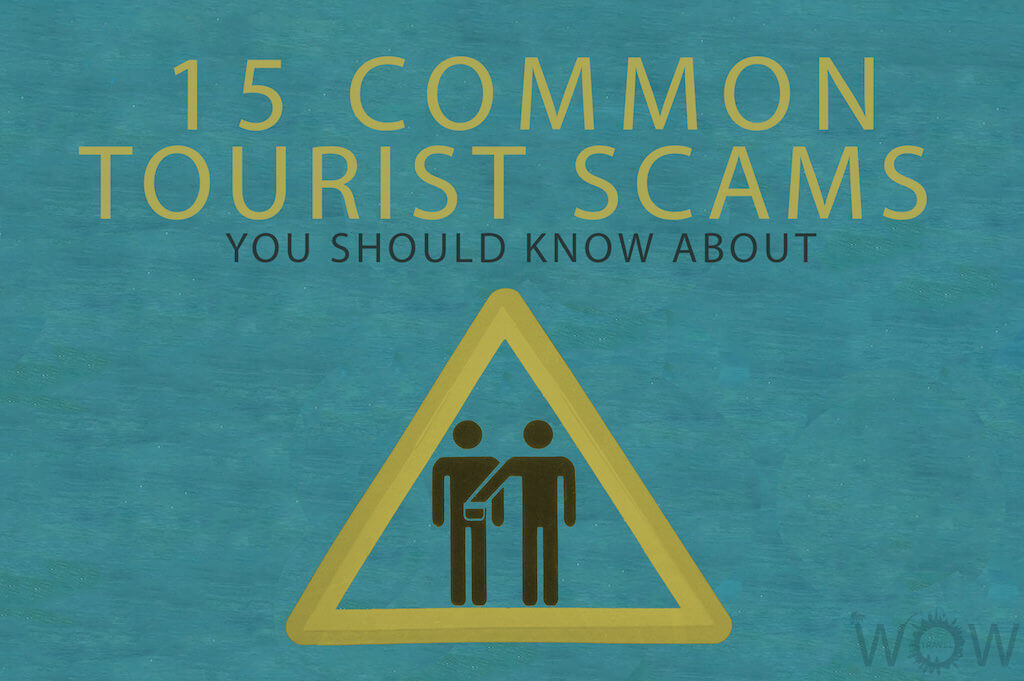 No matter where you go in the world, there are always those bad elements eager to scam you and ruin you vacation. You would be surprised at how many tourists fall victim to scams while traveling, some may seem pretty obvious while others are very elaborate and ingenious tricks. Nothing worse than getting scammed to ruin your trip so here are the 15 Most Common Tourist Scams You Should Know About.

In any country, police personnel are supposed to be on your side. However, it’s also easy for scam artists to pose as police. Their tactic is to accuse their victims of some kind of crime and then ask for an ID and a wallet or bag. They are able to steal money or other valuables before handing it back.

Stain on Your Jacket

A scammer will spill something on your jacket, either making it look like an accident or doing it so subtly that you don’t notice. They will apologize and try to help you clean up. While doing so, they will either pick your pockets or their accomplice will.

Taxi drivers around airports or train stations usually pull this scam to foreigners. Once the passenger gets in the car, the driver will tell that the taxi meter is not working and will charge you a ridiculous price. Other tricks include taking longer routes or intentionally heading into gridlocked traffic or even use hacked meters that advance faster than normal.

You are a single male traveler who is suddenly approached by a gorgeous woman on the street in China. After chatting for a while, she seductively invites you for a drink at a nearby Cafe. Then she will take you to a place she has a relationship with, and when the bill comes, she will disappear and the bill would be much higher than market price.

You arrive at your hotel and check in at the front desk. When checking in, you give the front desk your credit card information. You get to your room and settle in. Someone calls the front desk and asks, for example, for room 620 (which just happens to be your room). The scammer will be asking you to confirm your credit card details over the phone. The reasons for requiring this information can vary – anything from computer glitches to problems with the method of payment.

Someone will come up to you and offer a friendship bracelet. They will try to put one on your wrist as if you are their new best friend, and want you to share in their feelings of warmth. After that, they will demand to be paid, and will loudly express their displeasure if you refuse. The same story works with Rosemary, it is supposedly a sign of friendship, so an offer of rosemary is like the friendship bracelet scam.

Beware of fake policemen but even more from corrupted policemen. In many countries they are often underpaid and find tourists an easy source of income, so any foreign vehicles or people on the road will often be targeted. They will pretend that you have broken the law and demand thinly-disguised bribes.

A group of tourists will approach you, handing you a broken camera and ask you to take a photo for them. They will drops the camera on purpose as you hand it back and blame you for the accident, then demand money. Another variation is when someone offers to take a picture of you with your camera, and then will run off with the camera.

A shoe shiner will drop his brush in front of you and when you pick it up and hand it back to him, he will begin to shine your shoe for being so nice. Afterward he will demand payment because he just cleaned your shoes. These scam artists have on the back of their tote bag,  a brush held on by a small hook. When the guy is walking he uses the back of his leg to knock the brush off in front of you and onto the ground.

Rose For Your Girlfriend

Someone will approach you and your girlfriend and try to sell you a rose for an expensive fee, making you feel like a “bad boyfriend” if you refuse.

While en route to your hotel or a restaurant the taxi driver will tell you that your chosen hotel, restaurant or shop is closed…but there is another, even better one you should try, where he earns a nice commission for bringing you. In other cases locals will approach you near tourist attractions and tell you that the attraction you are planning to visit is closed due to a public holiday, and right after will suggest taking you to a better attraction where they earn a commission.

This one is probably one of the most ludicrous. A woman carrying a baby pretends to trip and throw a bundled doll into your arms, or just drop it on the ground, in an attempt to draw your attention away from pickpockets, often a bunch of kids swarm around and rob you.

Whilst you are queuing for your train or bus ticket, a pretty official dude will walk along the queue offering passengers to buy tickets at a higher price so that you can break the queue and save time. However, be assured that these tickets are fake.

Someone might spill a little scraps of paper with peanuts or snacks on your table, and then attend to other tables. If you touch them, you have just bought it. The guy will demand to be paid because these peanuts are not free.

Taxi drivers will seem as if they are in a rush when they drop you off. They will try to get you out of the cab as fast as they can, making sure that all your big luggage is out of the car, but will also try to make you forget that you left a small bag behind. Another common taxi scam is one in which the taxi driver drives away with your luggage still in the trunk as soon as you get out of the taxi.